Vladimir Putin may be a war criminal to most in the West, but for ardent Russian ultranationalists he is a risen Christ fighting a crusade. 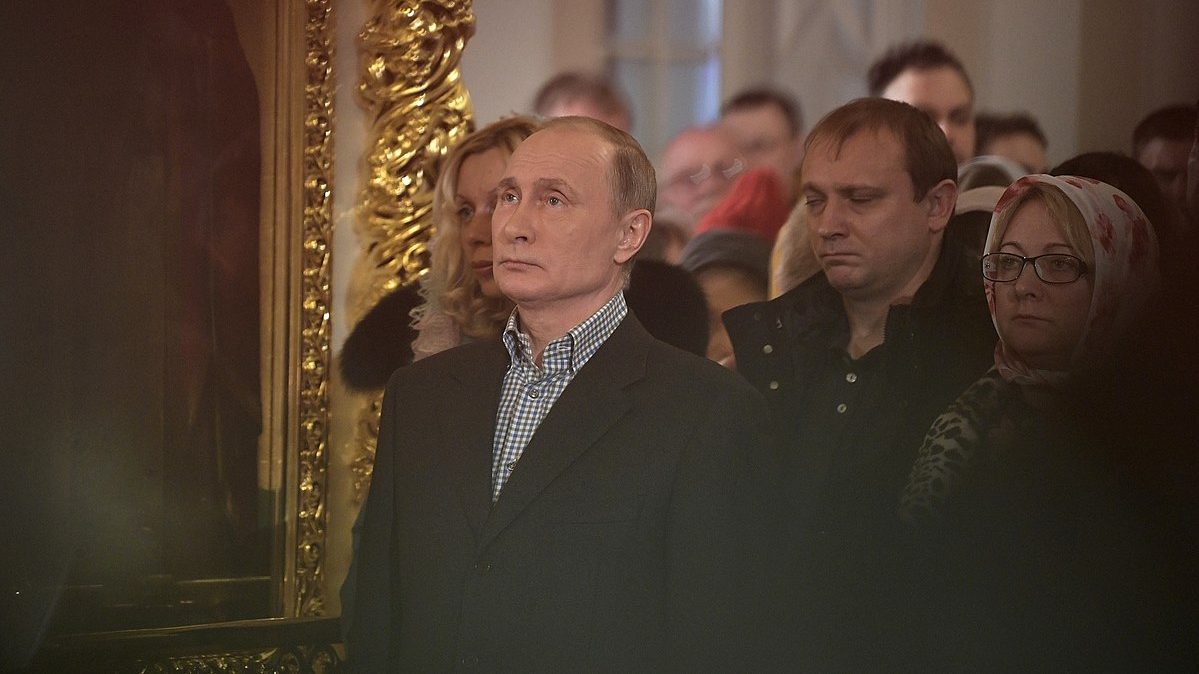 Photo: Vladimir Putin at Christmas service at the Church of Simeon and Anna (St. Petersburg; 2018-01-07. Credit: kremlin.ru via Wikimedia.

Vatican Silent as Brazen China Targets Cardinal Putin Gambles His Future on Mobilization Getting Ahead of the Curve: Chinese Influence in Central and Eastern Europe The Bewilderment of Kremlin Propagandists Sweden Pays for a Negative Election An Education: Islamic Universities in Russia The Elizabethan Era
Explore

The International Criminal Court is flooded with detailed reports of Russian war crimes in Ukraine, along with abundant evidence that the entire special military operation has been instigated and directed by Russian Federation’s president, Vladimir Putin.

The “newspaper of the Russian state” Zavtra (Tomorrow), anticipating Russian Easter, pictured the special military operation in Ukraine as a Holy war and depicted Putin carrying the cross of the “Russian Cathedral” to the top of Golgotha. Editor Aleksandr Prokhanov splashed the headline “He is truly risen!” and a picture of Christ across the front page, accompanied by heavy artillery, a tank, and some smoking buildings.

Photo: Featured in ‘Truly!Russia – a temple illuminated by the Holy Fire’ article by Alexander Prokhanov for Zavtra. Credit: Zavtra.

Prokhanov denounced Gorbachev’s late 1980s perestroika (restructuring) campaign for nailing Russia to the cross and compared Boris Yeltsin’s 1990s Russia with putting Christ into his grave. By implication then, Putin’s emergence is a resurrection.

Prokhanov stated that Russia is not a helpless victim of foreign doctors. He boasted that no one can kill the land of Baikal and the Volga, the venerable church leader Sergei, academician [“biosphere”] Vernadsky, Stalin, and the BAM (Baikal-Amur Railway) deemed unviable in the 1990s but the subject of renewed interest in recent years.

The relationship between Editor Prokhanov and Putin has not always been so cozy. Prokhanov had criticized him as too liberal in the early days, but became a loyal supporter after the annexation of the 2014 annexation of Crimea. Some observers characterize Zavtra as “brown-red”, the term used for Hitlerite-Stalinists. The paper’s earlier iteration, Den’ was founded in 1990, but was soon shut down by the Yeltsin administration.

Despite its boastful claim, Zavtra is not the official voice of the Russian government, although it sits next to famous publications like Izvestiya, Pravda, and Komsomol’skaya Pravda on newsstands, while the liberal Novaya Gazeta is no more. Russia’s now extinct liberal press would not have towed the Kremlin line, but most of the surviving print and electronic media trumpet whatever message the government wants. All convey the message that Putin, if not actually the crucified Christ, is a man of God whose actions are blessed by the Orthodox Church.

Prokhanov is seen by some Russians as an articulate clown, like the ardent nationalist Vladimir Zhirinovsky, honored in death by President Putin on April 6. Putin laid a bouquet of red roses near the coffin and bowed his head for a moment of silence for the ultranationalist, who was once a foe but later functioned as part of the “systemic” (read bribed or cowed) opposition that Putin used to advance his goals, while keeping up the appearance of democracy and pluralism.

The idea that the Ukraine operation is a war blessed by God was also heard on February 23, but performed in song to mark “Defender of the Fatherland Day”, as the prestigious St. Petersburg Chamber Choir solemnly performed a ditty entitled “On a submarine” which flippantly describes a nuclear attack on the US while using racist language toward black Americans. This ungodly event took place in St. Isaac’s Cathedral in St. Petersburg, Russia’s largest architectural masterpiece from the first half of the 19th century. The choir sang about the commander of:

“A small submarine with a little atomic motor

And with ten little bombs of a hundred megatons,

How it crossed the Atlantic and I called the gunner:

‘Petrov, target the city of Washington!’ He replied,

‘Tra-la-la, tra-la-la, I can do everything for three rubles

Greetings to the new land of the Enemy’!

And high above in a little plane is my pal Vovochka

He bears gifts in loaded hatches

In the little submarine with a little atomic motor

‘Tra-la-la, tra-la-la, we can do everything for three rubles!

And burn, burn, you land of the Enemy’!”

The lyrics were composed in 1980 as a parody of Cold War thinking—something like the American film The Russians Are Coming. Its public performance in a cathedral the day before Putin’s second war of aggression against his neighbors says something bleak about the alliance between church and state in Putin’s Russia.

Of course, Russians speak in more than one voice. The Russian rapper Oxxxymiron, who is opposed to every form of militant chauvinism, sings against war and raises funds to assist needy Ukrainians. Banned in Russia, he and his team are forced to perform abroad.

Walter Clemens is an Associate at the Harvard University Davis Center for Russian and Eurasian Studies and Professor Emeritus of Political Science, Boston University. Clemens’s books include ‘Can Russia Change?’ and ‘The Republican Virus in the Body Politic.’