Hybrid warfare is a big threat. But countering it lacks political support 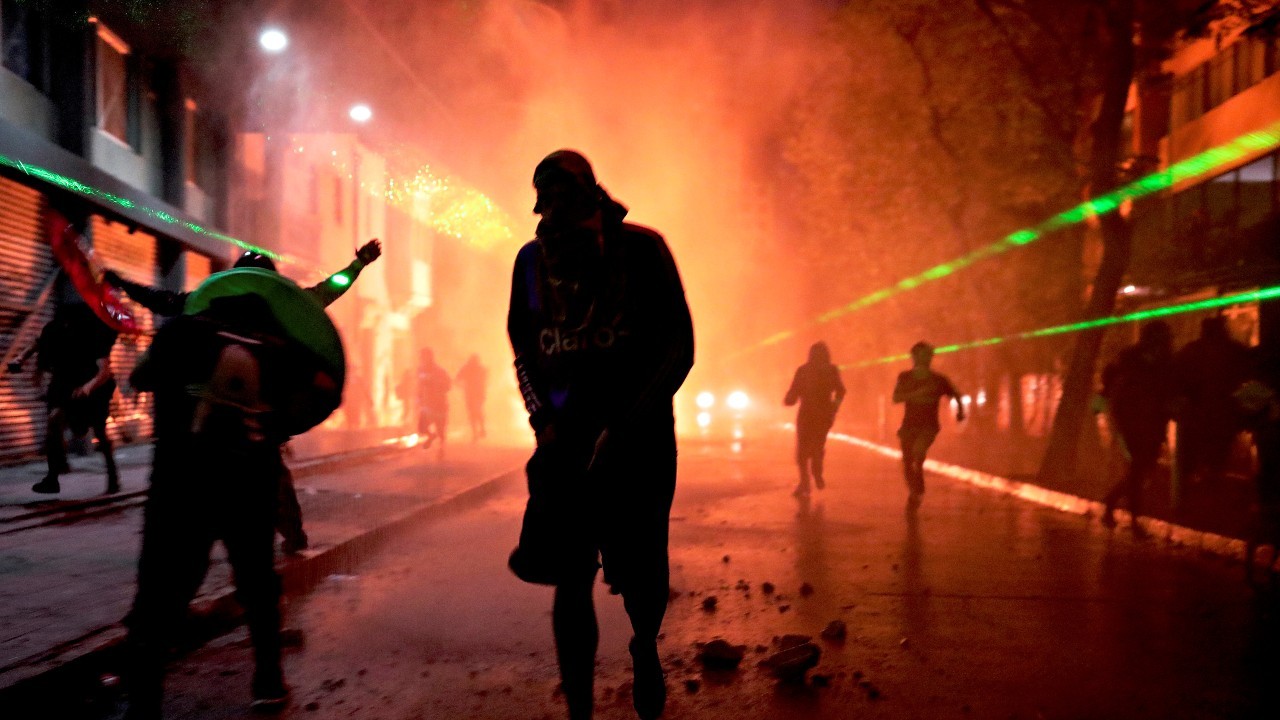 Photo: Demonstrators react on the street amid laser beams during a protest against Chile's government in Santiago, Chile December 31, 2019. Credit: REUTERS/Pablo Sanhueza

Defense budgets benefit not only national security. They mean business for arms industries, who are famed for their lobbying skills. They top up the pork barrel, giving elected representatives something to show the voters. New, better, and more plentiful equipment pleases the military leadership. Their endorsement, and the whiff of valor and glory, also enthuses the public and politicians.

None of that means that higher military spending is wrong: indeed, in many European countries, it is clearly too low. This underspend corrodes alliance solidarity, worsens dependence on the United States as the continent’s security backstop, and increases the risk of miscalculation by adversaries.

But the threats to national security are not just in the air, sea, land, and space domains. They also involve what in the Soviet era was called “active measures” — or to use the current, modish term, “hybrid warfare”.

This comprises the use of dirty money, propaganda, targeted intimidation of individuals and institutions, subversion, abuse of the legal system, state-sponsored crime, economic pressure, and many other “sub-threshold” tactics, meaning they are below the level of what we normally call “war”.

Most countries (Finland is the big exception) do a bad job in countering these threats. The result is that Russia (and China) attacks our decision-making and increases divisions in our alliances and societies, eroding trust and cohesion. Worse, our adversaries’ arsenal is not static. It is developing rapidly. The use of artificial intelligence, for example, allows sophisticated attacks, such as “deep fakes”, video and audio that look real but aren’t.

Another problem is the blurring of external and internal threats. How should a free society treat citizens who (wittingly or unwittingly) support a hostile state, for example by spreading its propaganda?

Responding to these threats and dilemmas will be hard, particularly because we are so late in acting. But whereas military spending benefits from strong lobbies, measures against hybrid threats have few friends. They do not bring lucrative contracts, new military bases, and grateful voters. Nor can you parade the results with a brass band before a cheering crowd. Sub-threshold defense and deterrence cannot be outsourced to men and women in uniform. It involves all of us. It requires rethinking the way society and government work, and making many adjustments, mostly small but often painful, and with few short-term benefits.

For a start, it means admitting weakness and exposing past failures. Catching and exposing agents of influence, for example, raises awkward questions. Why were these people allowed to do this for so long? Who else remains to be uncovered? Many people in the political and economic elites in Western countries have squirm-worthy records, dating from an era when closer ties with Russia and China were government policy.

Many business models are still based on these relationships. The energy industry is a prime vector of Russian influence: just look at Germany. China has played similar games with infrastructure projects. The financial services sector, notably but not only in Britain, is afloat on a sea of lightly scrutinized foreign money. Bankers, lawyers, and accountants benefit. Universities in many countries are heavily dependent on fees from Chinese students and fear Beijing’s displeasure as a result. Such industries have existential reasons to lobby hard against a serious shift in the Western approach to Russia and China.

More broadly, people do not like changing their habits. Dealing with hybrid threats means breaking silos, widening circles of trust, putting aside rivalries, and sacrificing treasured routines. Different bits of government and society (officials, journalists, business executives, police, teachers) have to talk to each other and to listen too.

Nobody lobbies for that. But you should.