Vladimir Putin might have cut off gas to Poland and Bulgaria following his invasion of Ukraine. But his real target is European sanctions unity. 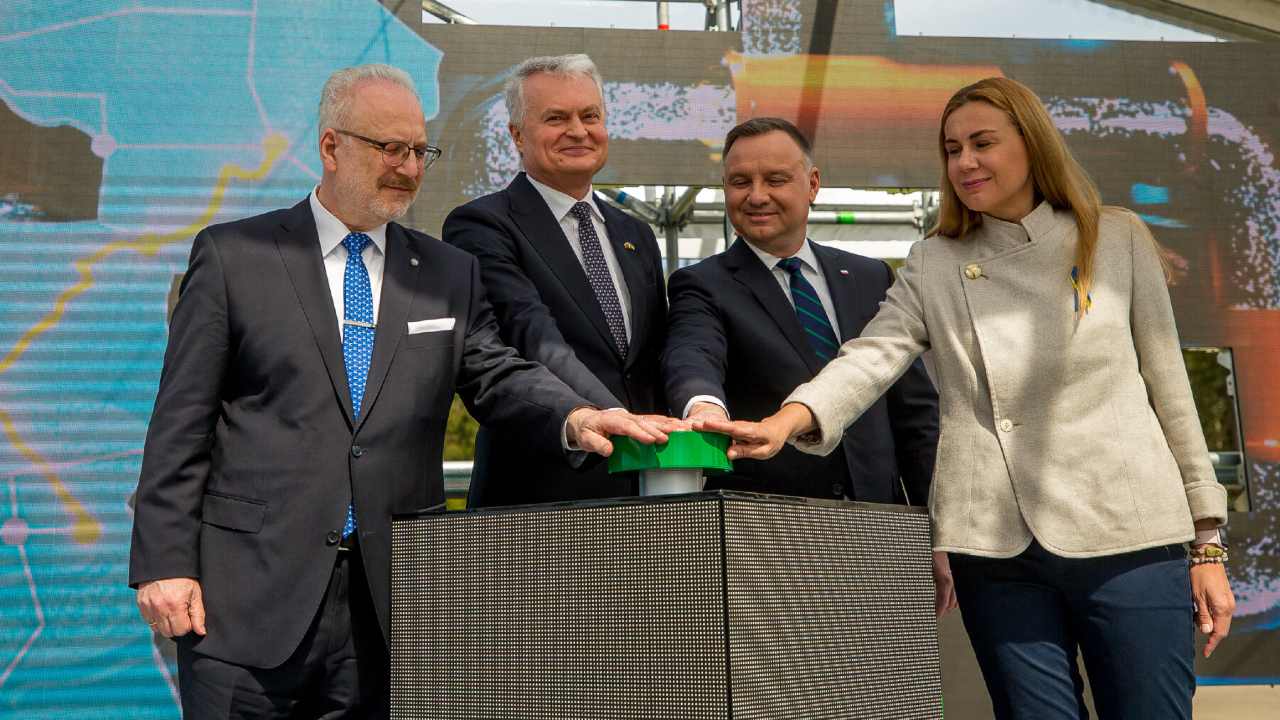 Photo: President Gitanas Nausėda participated in the opening ceremony of the Lithuanian-Polish gas pipeline GIPL at the Jauniūnai natural gas compressor station in the Širvintos district. Together with Presidents Andrzej Duda and Egils Levits of Poland and Latvia, and EU Energy Commissioner Kadri Simson, the President pressed a symbolic pipeline launch button. Credit: President of the Republic of Lithuania.

Kremlin-controlled Gazprom announced on April 27 that it would halt gas shipments to Poland and Bulgaria — the latest demonstration of Russia’s proclivity to weaponize its energy exports to Europe. Kremlin spokesperson Dmitry Peskov cynically described the move as responding to “unprecedented unfriendly actions” taken by nations against the Russian Federation.

Those “unfriendly actions”? The words were an apparent refusal by Poland and Bulgaria to accept a legally-dubious “decree” signed by Putin on March 31, requiring gas payments to be made in rubles. Never mind that Poland’s state gas company PGNiG issued a statement pointing out that Putin’s gas-for-rubles scheme was neither covered in its existing contract with Gazprom nor was there even a payment due at the time. Details, details.

While some observers have characterized Gazprom’s cut off as a new phase of Kremlin escalation against the West as Russia invades Ukraine, the move wasn’t shocking to anyone even casually following Moscow’s malign energy actions toward Europe over the years.

After all — this is just the latest move in a long-running, Kremlin-instigated gas crisis in Europe that started in mid-2021 and which allows Gazprom’s defenders — like Peskov — to perform implausible logic gymnastics to explain away the company’s behavior as “just commercial.” These extraordinary conductors of a decades-long symphony of absurdity — including figures like former German Chancellor Gerhard Schröder — aim to drown anything that does not harmonize with variations on the Kremlin’s farcical refrain that “Russia has always been a reliable energy supplier to Europe.”

Once upon a time, the decision might have caused profound consequences for both countries. It did in 2009, when the Kremlin left much of Europe freezing in midwinter. But those days have long gone, because Poland and Bulgaria have been preparing, along with help from the European Union (EU). Putin has so often weaponized energy, that they had every incentive.

So both countries fixed the roof while the sun was shining (or at least when there was no rain.) Poland and Bulgaria have been able to stand by their decisions to reject Putin’s gas-for-rubles scheme and maintain support for Ukrainian sovereignty because of their long-term energy infrastructure investments, in development since Russia’s initial invasion of Ukraine in 2014.

Recall that in the aftermath of Russia’s illegal annexation of Crimea and invasion of Eastern Ukraine, the European Council declared in June 2014 that reducing external energy dependency would be a strategic EU priority. In February 2015, the European Commission formalized this proposal into the European Energy Union policy framework. From that moment, a focus on advancing energy security “hardware” (energy diversification infrastructure) and “software” (market liberalization regulations) would be prioritized to reduce reliance on Russian energy resources, while battling monopolistic practices by Russian state-owned-enterprises in the European energy sector (mostly Gazprom.)

Poland hardly needed outside encouragement. In fact, shortly after the dissolution of the Warsaw Pact, it began its long-term push to cut Russian energy dependency. The past decade has seen this vision — begun in 1992 by officials including Piotr Naimski, who in recent years has served as Poland’s indefatigable Plenipotentiary for Strategic Energy Infrastructure, reach fruition through the development of a myriad of projects.

This includes the Świnoujście LNG terminal, which began an operation to bring direct imports to Poland in 2016, with a capacity of 5 billion cubic meters per year (bcma), and currently undergoing technical expansion to raise this to 7.5 bcma by 2023. Moreover, on May 5, just a week after Moscow’s gas cutoff started, the long-awaited 2.4 bcma capacity Gas Interconnector Poland-Lithuania (GIPL) pipeline was officially opened, followed by the May 9 arrival of the first LNG cargo delivered for Polish use via the aptly-named Independence floating storage and regasification unit (FSRU) LNG terminal at Klaipeda, Lithuania. Add to this the critical milestone reached just a day after the Russian cutoff by the 10 bcma capacity BalticPipe project, which announced the opening of the Norway-to-Denmark section on April 28, and whose link across the Baltic to Poland will be opened by October. Looking forward, Polish energy officials continue to eye the opening of an additional LNG terminal – an FSRU at Gdansk.

Poland won’t be alone in its new energy infrastructure bonanza this year. In July, just two months after Russia’s gas cutoff, and after years of careful energy diplomacy between Bulgaria and Greece, the Gas Interconnector Greece-Bulgaria (IGB) is set to come online with a capacity of up to 5 bcma from the Southern Gas Corridor. Furthermore, Greek and Bulgarian leaders met at a ceremony on May 3 that broke ground on a long-proposed FSRU LNG terminal at Alexandroupolis, Greece, with a 5.5 bcma capacity. This is slated to come online in 2023. Additionally, in the wake of the Russian gas cutoff, Bulgarian officials proceeded with booking LNG cargoes at the port of Revithoussa, Greece, to be transferred via DESFA’s Greek gas transmission system.

Poland and Bulgaria were prepared for Russia’s inevitable gas cutoff, so what was the Kremlin thinking? In short, it aimed to fire a warning shot at those countries with a higher dependence on Russian gas, and which are behind on their diversification homework, to scare (or provide an excuse to) those wishing to break ranks on Ukraine sanctions, and thereby prop up the ruble.

A prime example has played out in Hungary. While Poland has reduced its Russian energy reliance, Viktor Orbán’s government has actively sought to deepen energy ties with Russia, arguing that it is securing favorable deals. This included support for the second line of the Kremlin-backed TurkStream pipeline, as well as signing a 15-year gas supply contract with Kremlin-controlled Gazprom late last year. Likewise, the government has stalled an EU embargo on Russian oil imports. Hungary says it is acting in self-interest; its critics say it’s acting in Putin’s interest.

A more hopeful story is playing out in Germany. Unlike the energy diversification policies now coming online across NATO’s eastern flank, Germany believed it best to feast on cheap gas, and for years sought to raise its Russian dependence with the now-defunct Nord Stream 2 pipeline. Now, in the new and highly publicized Zeitenwende era of Kremlin deterrence, things are slowly changing. On May 5, Green Party Economy Minister Robert Habeck stood at a ground-breaking ceremony for Germany’s first LNG terminal at Wilhelmshaven, boldly predicting “a good chance to do what is normally impossible in Germany – to build an LNG terminal within about 10 months and connect it to the German gas supply.”

Habeck also declared on May 12 that the Kremlin is using energy as “a weapon” – a true assessment of Russia’s energy games unthinkable from previous governments in Berlin. For the sake of Europe’s energy security, to boost its resilience to Russian energy pressure, and to ensure ongoing support for Ukrainian sovereignty, Germany’s new energy course — one taking a page out of the energy playbooks of NATO’s eastern flank countries — must succeed.

Dr. Benjamin L. Schmitt is a Research Associate at Harvard University, a Senior Fellow for Democratic Resilience at CEPA, and Space Diplomacy Lab Co-Founder at the Duke University Center for International and Global Studies. (Twitter: @BLSchmitt)