The tensions in Transnistria enhance concerns that Moldova could be the next country to fall victim to Russian military aggression. 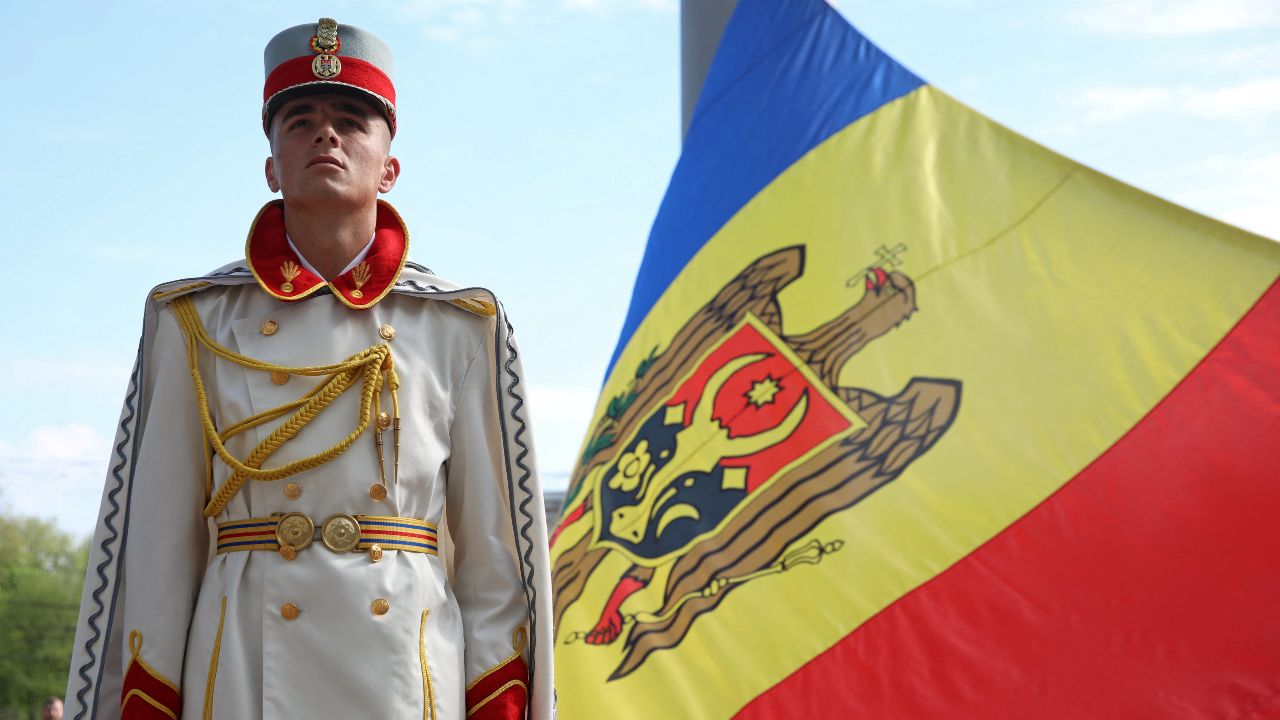 Photo: A member of the guard of honor holds the Moldovan flag during a ceremony marking the State Flag Day in Chisinau, Moldova April 27, 2022. Credit: REUTERS/Vladislav Culiomza

Moldova has done what it can. Compared to its population of only 2.6 million, no country has received more Ukrainian refugees than the Republic of Moldova. The effort undertaken by both state authorities and private citizens to welcome almost half a million Ukrainians is extraordinary, but the small country with a big heart — as Moldova has been fairly portrayed in international media — is fast running out of resources.

Neither a European Union (EU) nor a NATO member, Moldova’s foreign policy in regard to Russia’s war in Ukraine resembles Henry Raeburn’s famous painting of the Skating Minister: the country remains neutral, keenly aware of the slippery perils of its geopolitical position. Sandwiched between Romania and Ukraine, Moldova has to reconcile a population divided between a desire to westernize and adhere to the EU on the one hand, and the wish to grow ever closer to Russia on the other.

In fact, the most recent statistics look discouraging for pro-European supporters: according to research conducted by the Moldovan Institute of Marketing and Surveys in April, 43.6% of citizens believe that NATO and Volodymyr Zelenskyy are the main culprits for starting the Ukraine war, a percentage higher than that of those who held Russia and Vladimir Putin responsible. According to the same research, 72% of respondents believe that Moldova should not join the sanctions against Russia and almost half of Moldovans believe that Ukraine should be left to fight alone, without foreign aid.

Although the numbers have a chilling effect, they reflect a gloomy context: after a short gust of optimism caused by the decisive win of pro-European forces in the parliamentary elections in the summer of 2021, Moldovan citizens have endured growing inflation, an energy crisis (caused by Russia), and a general worsening of socio-economic conditions. The sounds of bombs exploding in Odesa on February 24 added a security challenge to an already full plate.

More than half of Moldovans fear that a Russian invasion is imminent. With Gazprom as its only gas provider and permanent Russian military “peacekeeping” forces in the breakaway region of Transnistria, the government has adopted a cautious approach, strongly reiterated its neutrality, and decided not to join Western sanctions on Russia. However, it has banned by law the display and use of symbols used in the war in Ukraine. In response, Russian propaganda branded President Maia Sandu a Nazi and disseminated fake news suggesting that Russian-speaking citizens in Transnistria were being oppressed by the Moldovan government.

The worrisome message was restated by Russian authorities: on April 22, the Defense Ministry declared that the goal of the second phase of the special operation in Ukraine is to control the south of Ukraine, and to gain access to Transnistria, “where there are also facts of oppression of the Russian-speaking population.” (This would be notable, not least because Moldova exercises no administrative or policing function in the region, making the oppression of Transnistrians a difficult proposition.)

Russian authorities also suggested that they may recognize the independence of Transnistria, in which case the territory risks a similar fate to that of South Ossetia, and the Donetsk and Lugansk republics.

Despite the overwhelming challenges and the energy dependence on Russia, Moldova’s authorities applied to join the EU a week after Russia’s latest invasion of Ukraine. While this undoubtedly represented a historic moment for Moldova, EU accession remains a faraway dream.

However, the West has understood the need to financially support Moldova. So far, the country has received payments of €150m ($158m) and €53 million from the EU. The bloc has also offered €8m euros for emergency support to refugees, €15m to support both the processing of refugee applications as well as the safe transit and repatriation of third-country nationals, in close cooperation with the International Organization for Migration, and €15m to support the EU Border Assistance Mission. Around 30 other states have also sent aid amounting to a further €695m in budget support, loans, and other forms of financial assistance.

As for security concerns, NATO’s Romanian Deputy Secretary General Mircea Geoană declared that NATO anticipates provocative actions but does not see imminent military risks for Moldova. The Moldovan authorities have urged the population to stay calm and not fall prey to disinformation and Russian provocation, however, the level of tension remains high.

In small countries, individuals often see history as something that just happens to them. Illustratively, in the past two centuries, Moldova was part of the Russian Empire, Romania, and then the Soviet Union before proclaiming its independence in 1991. In the current uneasy geopolitical circumstances, there is a hope that the country — much like the skating minister — stays upright and safe on history’s treacherous ice.

Anda Bologa is a Fulbright scholar and an independent expert on digital policy, Central European foreign policy, and transatlantic affairs. She was a Denton Fellow at the Center for European Policy Analysis (CEPA).

The views, thoughts, and opinions expressed in the text belong solely to the author, and not necessarily to the author’s employer, organization, or other group or individual.