War news from Ukraine has an extra dimension — measuring the generally chasmic gap between actual events and the Russian explanation. 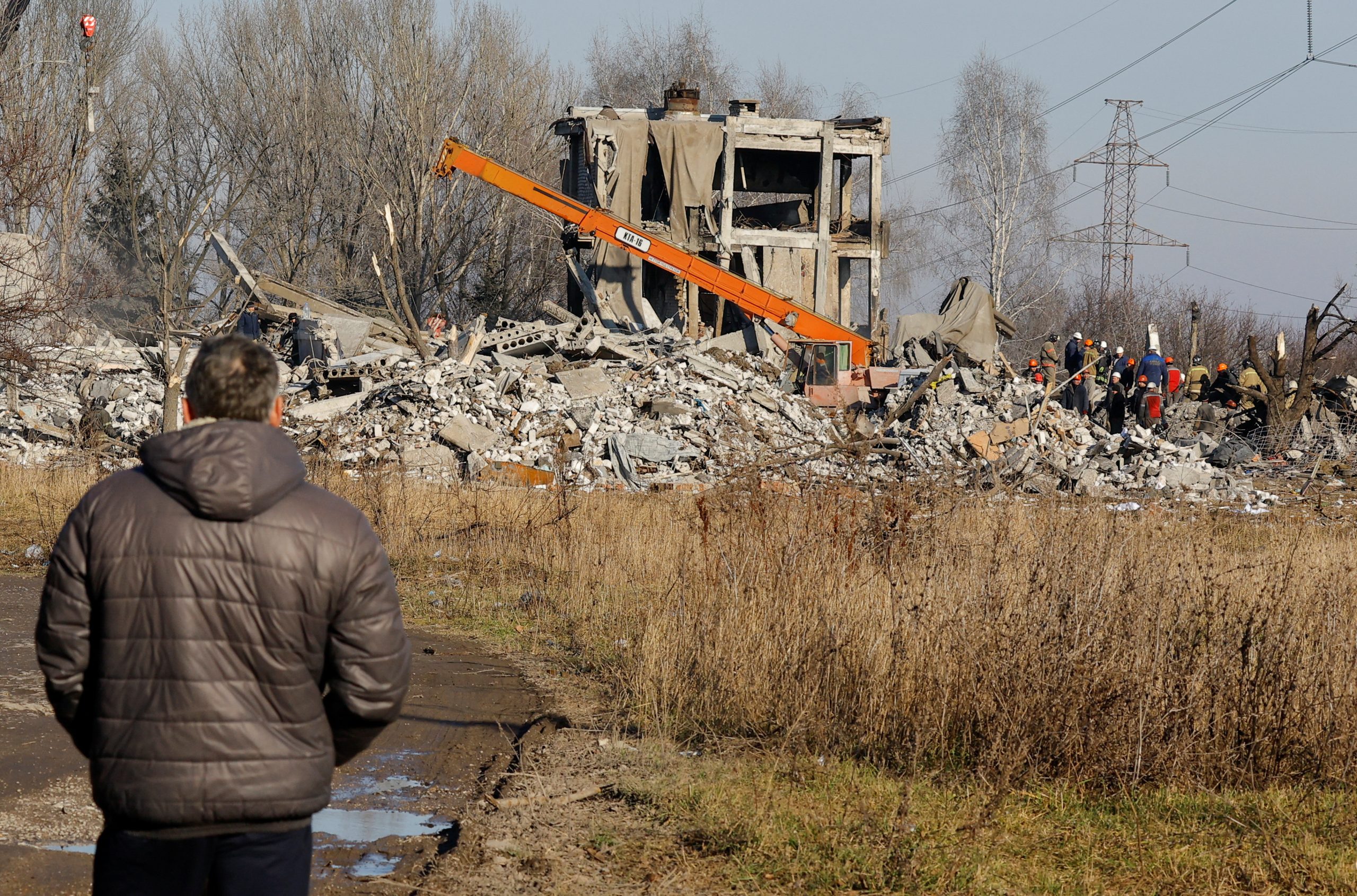 Photo: A man watches workers removing debris of a destroyed building purported to be a vocational college used as temporary accommodation for Russian soldiers, 63 of whom were killed in a Ukrainian missile strike as stated the previous day by Russia's Defence Ministry, in the course of Russia-Ukraine conflict in Makiivka (Makeyevka), Russian-controlled Ukraine, January 3, 2023. Credit: REUTERS/Alexander Ermochenko

The New Year’s Day attack by Ukraine on a packed Russian barracks in the town of Makiivka, east of Donetsk, was quickly acknowledged by both sides to have been a bloody event. Russian milbloggers spread the news and suggested “hundreds” had died.

Unable to deny an event already assessed as unusually damaging, Russia’s spokespeople made two assertions. Firstly, that the number of dead was no more than 89, and second that the fault for the blood loss lay with the victims. They had, Russia said, been using their cellphones, contrary to regulations, and the Ukrainians had zeroed in on the signals.

Neither statement is impossible, and neither is likely. The alternative explanations are so grim for the military that it is easy to see why the notoriously unreliable Russian news system would shy away from them.

Ukraine’s military says its guided missile strike killed at least 400 Russian soldiers. It said that they were housed in temporary barracks located in a vocational school in occupied Makiivka, a city of more than 300,000. Reports suggested ammunition was stored within the compound.

The intelligence arm of Ukraine’s defense forces was understandably circumspect about its methods. “In order to track the actions of the enemy and launch fire strikes against him, Ukrainian military intelligence uses all the forces and means available to us,” it told this author.

It is “not impossible, but implausible” that Ukraine tracked Russian mobile phone usage to conduct this particular strike, Roman Horbyk, a Ukrainian lecturer at Örebro University in Sweden, said.

He added that in urban environments such as Makiivka, it would be hard for Ukrainian forces to differentiate between civilian and military phone numbers. Targeting the building based solely on information from mobile phones would have been risky verging on reckless.

“A lot of people are probably using Russian mobile numbers,” he said. “It was happening around the new year, so you could easily imagine a bunch of civilians basically hanging out . . . it’s more logical to conclude that it was probably just a tip-off,” Horbyk said.

In addition, Ukraine has been careful to focus its resources on military targets over the course of the conflict and is known to conserve its HIMARS-guided missiles, which are in relatively short supply.

It is easy to see why Russia would not wish to emphasize the role of a Ukrainian resistance network behind the lines and able to feed high-grade, time-sensitive intelligence back to artillery batteries. The Ukrainian city of Makiivka is after all (as the Kremlin sees it) “Russian.”. The Kremlin continues to maintain that the people of eastern Ukraine broadly support separation from Ukraine.

Russian military bloggers have also suggested that the mobile phone excuse is misleading and that higher-ranking military men often have a track record of acting in their own interests. “Gray Zone” wrote on Telegram that the suggestion phone usage was responsible was “99% a lie” whereas the reliably downbeat former FSB agent Igor Girkin, aka Strelkov, noted that Russia’s generals are “untrainable” and prefer to remain “outside the radius of destruction of enemy missiles.”

The central propaganda aim has been to shield the Kremlin from any responsibility at all. “This is a strategy to make sure that the blame is not directed towards the Kremlin, towards the commanders, but just to those who actually died,” said Dr Gregory Asmolov, an expert in crisis communication at King’s College London.

He added that following Russia’s retreat from the key southern city of Kherson, communication strategies changed. Whereas initially, Russian propaganda focused on justifying the war, the Kremlin had to make a shift towards crisis communication and blame management and “why they’re not able to provide victory as soon as it was promised.”

In fact, the Russians clearly do face a highly motivated and determined underground network (as existed in Kherson) likely supplemented by US-trained and combat-hardened special forces units. Their activities will be heavily focused on military intelligence, although car bombs aimed at the occupying authorities, attacks on airfields and bridges, and strikes against oil and ammunition storage sites are more eye-catching.

That’s not to say cellphone tracking is irrelevant to the war in Ukraine. Analysts are reluctant to give too much away about the country’s capabilities, noting that this could be detrimental to Ukrainian interests. However, it’s worth remembering that Ukraine has captured Russian technology on the battlefield, in large quantities.

“Ukraine captured a lot of Russian equipment last year. So we can’t really rule out that some of it is being used against Russians,” Horbyk said. Ukrainian military intelligence made the Delphic statement to this author that it used “technical tools obtained from partners abroad.”

It is known that Russia has been using an electronic warfare system known as Leer-3 involving two UAVs and a communications truck. The setup is capable of tracking and jamming phone signals over a nearly 6km (3.8 mile) radius.

The propaganda war continues regardless of the military reality. Days after the Makiivka strike, Russia spread a copycat narrative that its forces had killed 600 Ukrainian troops in an attack on Kramatorsk, some 100km north of Donetsk.

While Russia did indeed appear to have landed strikes near two school buildings, they appeared to have missed their targets and both structures remained standing, according to Reuters reporters who visited the scene. There was no clear indication that soldiers had been living there, the report said.

“Kramatorsk is fake,” eastern Ukrainian military spokesperson Serhiy Cherevatyi told CEPA. “Missiles are as accurate as everything in the Russian army.”

Russia’s Telegram war bloggers were just as skeptical, terming it “ludicrous” and “another example of deceitful reporting”.

Aliide Naylor is the author of ‘The Shadow in the East’ (Bloomsbury, 2020). She lived in Russia for several years and now reports from Ukraine and the Baltic states.