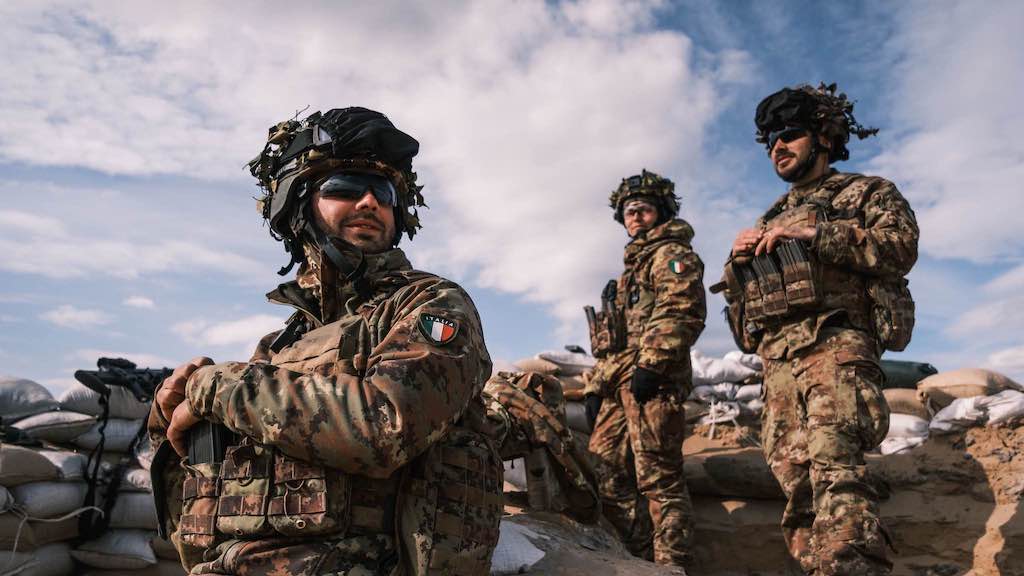 Image: Italian soldiers relax during a break in the action during Exercise Steele Crescendo. Credit: NATO.

Some major European powers, like France and Germany, have used the moment to once again talk of increased autonomy. But not Italy, which suddenly finds itself very much in tune with the Biden administration.

Defense Minister Lorenzo Guerini, a prominent Democrat, and a staunch Atlanticist, arrives in Washington for two days of meetings beginning tomorrow (Thursday, September 2.) The agenda includes talks with Secretary of Defense Lloyd Austin, as well as several other high-level figures.

He is likely to receive a warm welcome, in part because Italy now finds itself in a moderating position, both within NATO and the wider geopolitical context. As the Afghan crisis unfolded, Prime Minister Mario Draghi used Italy’s presidency of the G-20 to call for an extraordinary summit on Afghanistan this month, in the hope of finding some areas of agreement between the group’s disparate membership, which includes China and Russia.

Italy’s newfound role is partly due to Europe’s shifting political landscape and the ensuing power vacuum. Germany faces elections this month which will mark the replacement of  Chancellor Angela Merkel after 16 years in charge, and French President Emmanuel Macron is feeling the heat from domestic adversaries as he approaches next year’s presidential vote.

Draghi’s approach to Afghanistan is based on realpolitik and an assessment that the West needs the involvement of regional powers (such as India and Turkey) as well as systemic rivals such as China and Russia, both influential in the area.

However, the Italian premier’s interpretation of “strategic autonomy” and international power balances is more moderate than that of his leading European counterparts. He made this clear during his inaugural address in February when he sought to dispel all ambiguities regarding Italy’s Atlanticist positioning.

Previous governments had warmed up to China (enough to sign a Memorandum of Understanding for Italy’s entrance to the controversial Belt and Road Initiative) and, to a lesser extent, Russia. Draghi quickly changed that.

Last week, during his visit to Rome, Russia’s Foreign Minister Sergey Lavrov expressed doubts about a G20-wide approach to Afghanistan and remarked that Italy’s geopolitical positioning made it a (commercial) partner rather than an ally. For Atlanticists, that amounts to high praise.

Indeed, as far as defense and international cooperation are concerned, Italy and the U.S. are in lockstep. For instance, Italy will be taking over from the U.S. is leading the NATO mission in Iraq, as most American forces are withdrawn. And the two nations co-hosted the latest conference of the Global Coalition Against Daesh.

Moreover, the allies’ global efforts are somewhat complementary. As the Americans refocus their efforts on Southeast Asia, the Italians are focusing on the wider Mediterranean area and carrying out stabilizing efforts in North African nations — most notably, Libya — as well as the Middle East.

Rethinking NATO does not have to be a destructive, bond-shattering exercise. Rather, as the entente between Italy and the U.S. shows, it can be a chance to renovate and improve the 70-year-old alliance.