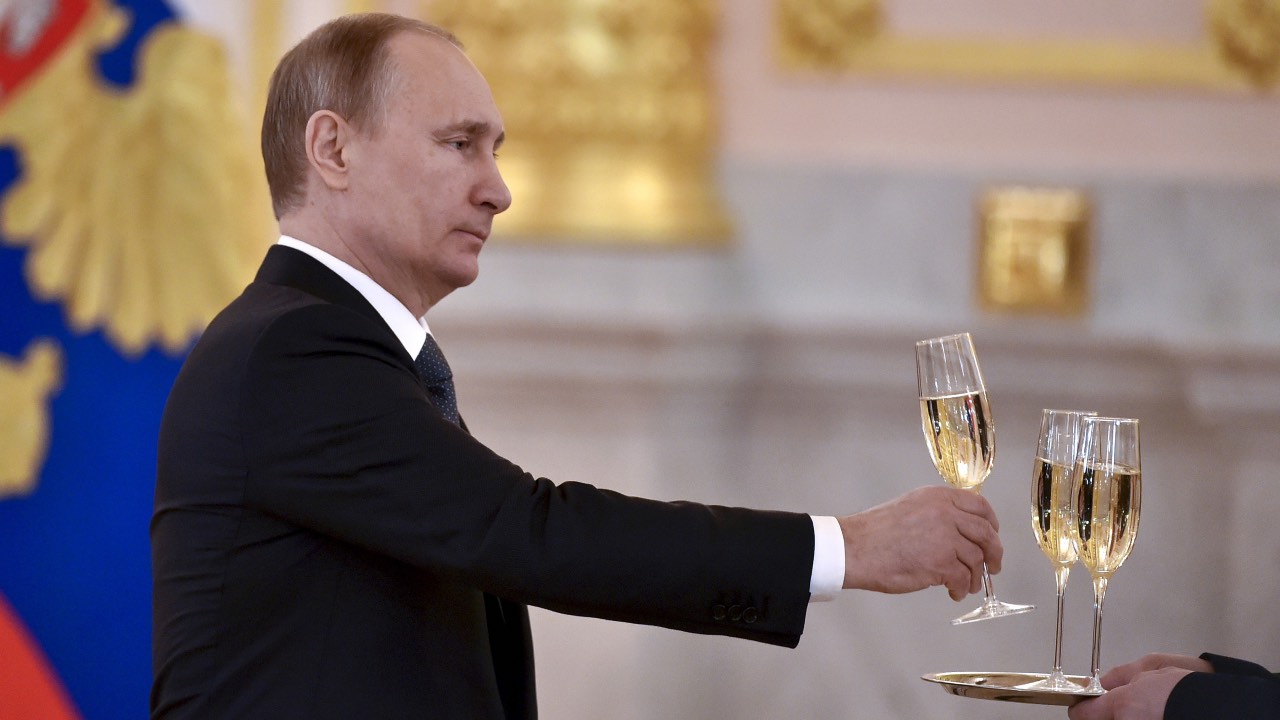 Photo: Russia's President Vladimir Putin holds a glass as he attends a ceremony to receive credentials from foreign ambassadors at the Kremlin in Moscow, Russia, April 20, 2016. Credit: REUTERS/Kirill Kudryavtsev/Pool/File Photo

Vladimir Putin’s experience as a KGB officer in Germany has served him well as President of Russia. He understands the psychology of Western leaders exceptionally well and knows how to take advantage of it.

The most obvious trait he exploits is the West’s constant preference to avoid confrontation. The United States and its allies almost always seek to avoid escalation and look for negotiated solutions. On issues of importance to Russia, this gives the Kremlin an immediate advantage.

Putin can seize the initiative and create a crisis — such as by invading Ukraine — prompting the West to call for “de-escalation” and offer Putin an “off-ramp.” Putin can escalate further, causing even greater anxiety, and he can then step back minimally, to the relief of the West, while still having significantly advanced his agenda. He plays this card again and again. The West always seeks solutions and stability. Putin uses crises and instability to create points of influence.

This is exactly what took place with Russia’s military build-up in and around Ukraine in April 2021, its closure of significant areas of the Black Sea for military exercises, its support for Bashar al-Assad in Syria, its election interference, and cyber-attacks, among countless other examples.

One of Putin’s tactics in taking advantage of the West’s desire for de-escalation is denying Russia’s own actions, no matter how implausible. To this day, despite Russian forces occupying the Donbas, ransomware hackers attacking Western businesses, and multiple political opponents killed or poisoned, Putin denies that any of this is Russia’s doing. This makes it easier for the West to convince itself that perhaps there is some shared interest with Russia in seeking a solution.

The second mistake Putin exploits is the Western preference for compartmentalizing issues. “Work together where we can, but push back where we must,” has been a mantra for multiple U.S. administrations. Instead of confronting Russia with forceful push-back across the board, compartmentalization allows Putin to maintain an aggressive posture on issues of greatest importance to him, while offering “cooperation” with the West on less significant issues for Russia, thus creating an incentive in the West not to disrupt the relationship.

On July 12, Putin published a 5,000-word pseudo-historical manifesto that justifies Russian aggression against Ukraine, even as Russian forces continue to occupy Crimea and part of Donbas. There was no response from the U.S. or other Western governments, most likely because of a desire to avoid a “tit-for-tat” — i.e., to avoid confronting Putin over an essay, no matter how egregious.

Three days later, U.S. Climate Envoy, and former Secretary of State John Kerry, was in Moscow issuing a joint statement with his counterpart about shared U.S.-Russian goals in fighting climate change. The message to Russia’s neighbors was clear: Russia can conduct aggression against them, and still be engaged in high-level diplomacy by the United States.

How much Putin actually cares about fighting climate change can be debated. But his use of this visible “cooperation” on an issue he knows is of importance to the United States, while simultaneously engaging in and justifying aggression against Ukraine, is a vivid demonstration of how compartmentalization actually works in Putin’s favor. He uses issues of interest to the West, but of marginal interest to Russia, to create a sense of cooperation and thus incentivize the West not to confront Russia more forcefully in order not to interrupt this cooperation.

All that said, the most important mistake made by the U.S., which Putin takes advantage of with ease, is the hubris of thinking that the Western liberal order is so natural, so attractive and so dominant that the rest of the world will clamor to be a part of it. This may have been true during the Cold War, but in 2021 the West is in a competitive environment.

China, Russia, Iran, ideological movements and more are competing for the hearts and minds of people around the world, and in many cases winning. Rather than being complacent about people beating a path to our door, and wagging our fingers at those who stray from the West’s current set of preferred policies, the United States needs to think and act proactively, like an entrepreneur facing tough competition, in order to shape a world that favors freedom. We need to engage populations in repressed societies; find points of intersection with allies like Turkey and Hungary, even when we disagree; build new alliances; and stay engaged, rather than retreat from conflicts where the outcome is still in the balance.

It is a tall order, and much to ask of the Western public. But their well-being ultimately depends upon shaping the world of the future — one in which Western values are ascendant, not one in which they are in retreat. Unless we can rise to the challenge, fight across the board for the most important issues, and recognize that we are in a competitive environment and cannot be complacent, then we will continue to cede the playing field to the likes of Putin.