A shooting in Bratislava has cast Slovakia’s political polarization into sharp relief and prompted the country’s president to warn about a wider threat. 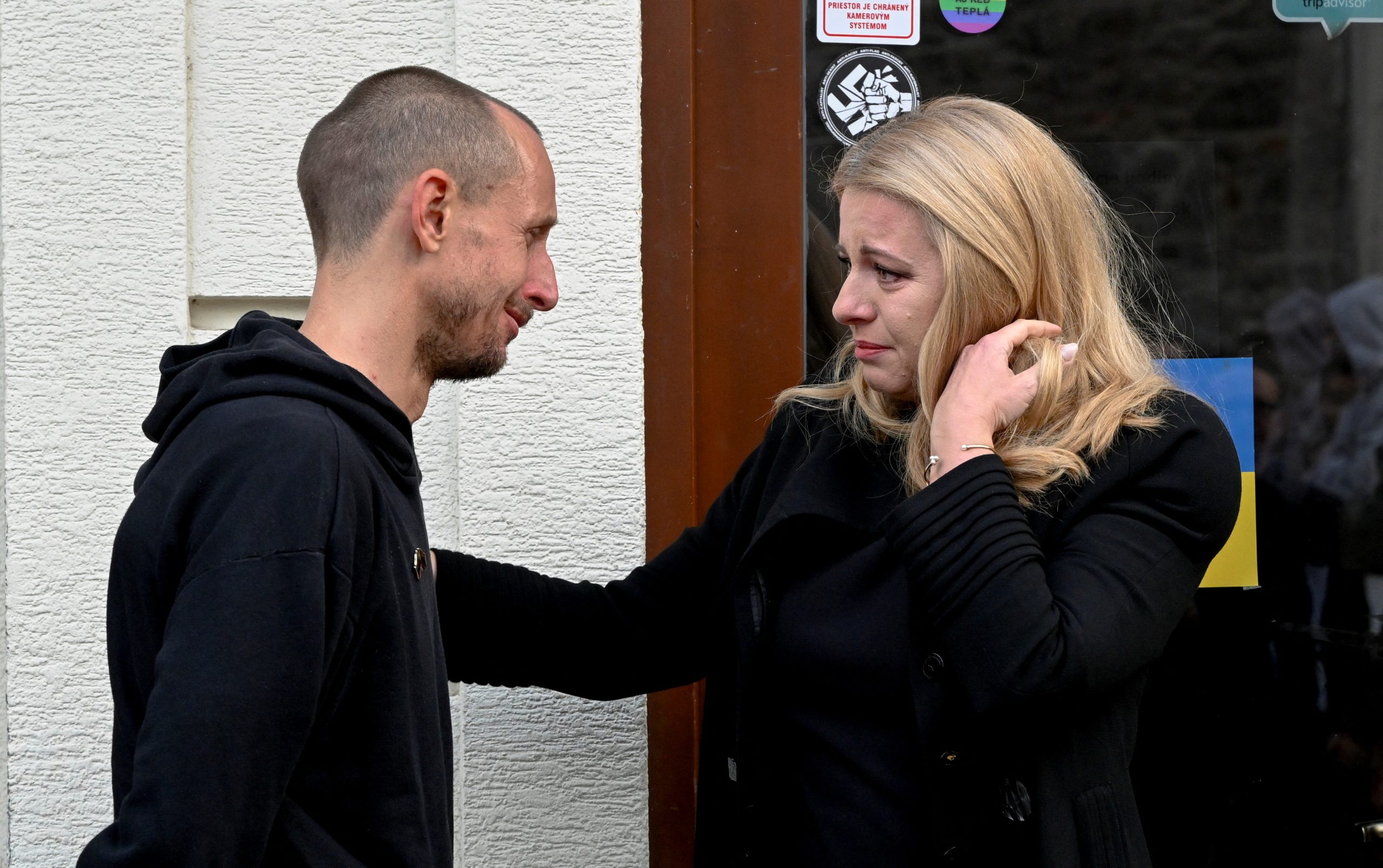 Photo: Slovakia's President Zuzana Caputova reacts next to the owner of a gay bar at the site of a shooting in Bratislava, Slovakia October 13, 2022. Credit: REUTERS/Radovan Stoklasa

Slovakia, despite its frequently toxic political rhetoric, is largely unaccustomed to political violence or mass shootings.

So when a 19-year-old gunman opened fire on a gay bar in the capital on October 12, killing two people and injuring another, the initial reaction was one of shock. A large public demonstration in support of Slovakia’s LGBT+ community was held two days later.

After fleeing the scene, the perpetrator posted about the attack on 4chan, a message board notorious for hosting hate speech and conspiracy theories, before taking his own life. A homophobic and antisemitic manifesto emerged online after the shooting, which is now being investigated as an act of terrorism.

Both the weapon used in the shooting and another gun found next to the killer’s body, appear to have been in the legal possession of the man’s father, a former candidate for a far-right political party, led by ex-supreme court president Štefan Harabin.

Harabin, who is now a prominent pro-Russian voice in Slovak politics and has publicly endorsed Vladimir Putin’s invasion of Ukraine, was a candidate in the 2019 presidential poll that elected the incumbent, Zuzana Čaputová.

Writing on social media immediately after the attack, President Čaputová expressed solidarity with Slovakia’s LGBT+ community and noted that the hatred that appeared to have motivated the killer had been “fueled for a long time by the stupid and irresponsible statements of politicians.

“For three years, I have been saying that even words could serve as a weapon; that we politicians are responsible for every single word we utter. Yet many here recklessly fill the space with hate,” she wrote.

Ultra-conservative religious messaging has become a growing part of Slovakia’s political discourse over the last five to 10 years, despite polls showing low levels of religious extremism in the population at large.

Speaking a week after the attack to the European Parliament in Strasbourg, Čaputová widened her critique, arguing that economic, security, and energy crises represent “a breeding ground for extremism” and that in many member states, there exist political forces that do not want “to build Europe but to destroy it.”

Warning that “If we don’t start defending democracy, it will cease to exist,” she called on MEPs to represent “decency, ethics and democratic values” in their work.

Ironically, Čaputová’s own experience shows how distant that aspiration may be, given that a senior MEP from her own country was party to the public vilification of the president herself, using a crude sexual slur, at a public rally earlier this year.

Monika Beňová, who has been an MEP since Slovakia joined the European Union in 2004 and is now a quaestor, or senior official, of the European Parliament, attended the political event, held by her Smer party, on May 1 in the Slovak city of Banská Bystrica.

A video of the open-air mass rally shows her standing next to party leader (and former prime minister) Robert Fico and fellow Smer MP Ľuboš Blaha as the latter leads the crowd in a chant describing President Čaputová as an “American whore”. Fico, in his speech to the crowd, then goes on to use the same term, before branding the Ukrainian government of Volodymyr Zelenskyy as “fascist”. Beňová later claimed she had not heard the slurs.

More recently, Fico has said that the president and the current center-right government is to blame for rising prices because “they have dragged Slovakia into a war that doesn’t concern Slovakia at all.”

Čaputová has been a staunch supporter of Ukraine’s effort to defend itself against the Russian invasion, and of Slovakia’s military support – both direct, and via the EU and NATO – for the government in Kyiv.

Despite the recent loss of its parliamentary majority after a party quit the governing coalition, the administration in Bratislava has also maintained its unequivocal support for Ukraine.

However, the strategy of Slovak politics’ extremists of constantly vilifying opponents who support Ukraine may have some prospect of success.

A poll conducted over the summer found that a plurality (over 20%) of Slovaks wanted Russia to win the war, a result that prompted some alarm.

That poll’s methodology was widely questioned, and a subsequent survey showed stronger support for Ukraine. But there undoubtedly remains a large pro-Russian constituency in Slovakia.

An investigation by newspaper Denník N showed that 20% of all candidates running for regional council seats in elections on October 29 were on the slate of extremist or far-right parties, which are uniformly pro-Russian. In one region, the figure is one in three. Yet only one far-right candidate was elected to a regional assembly, and none were successful in elections to the eight regional governor posts, suggesting their appeal, at least at the local level, is limited for now.

Among national politicians, the leader of a neo-fascist party was recently named among the top five “most trusted” political figures in Slovakia, with 25% of respondents endorsing him. He is also a member of the European Parliament.

The hate killings of members of the LGBT+ community seem not have affected the calculus of polarization, even for parties that are notionally on the left.

Fico’s Smer party, which labels itself social democratic, and whose previous cabinets have included several gay ministers (albeit closeted), has made no public statements about the October 12 shooting beyond boilerplate words of regret.

On the same day that President Čaputová addressed the European Parliament, the parliament in Bratislava declined to advance a proposal to grant some degree of legal recognition to same-sex couples — Slovakia is one of the few remaining EU members not to do so. The government refused to back the proposal, which attracted the support of only one-third of MPs.