Georgia could start its own production of drones, which would strengthen its bid to join the NATO alliance 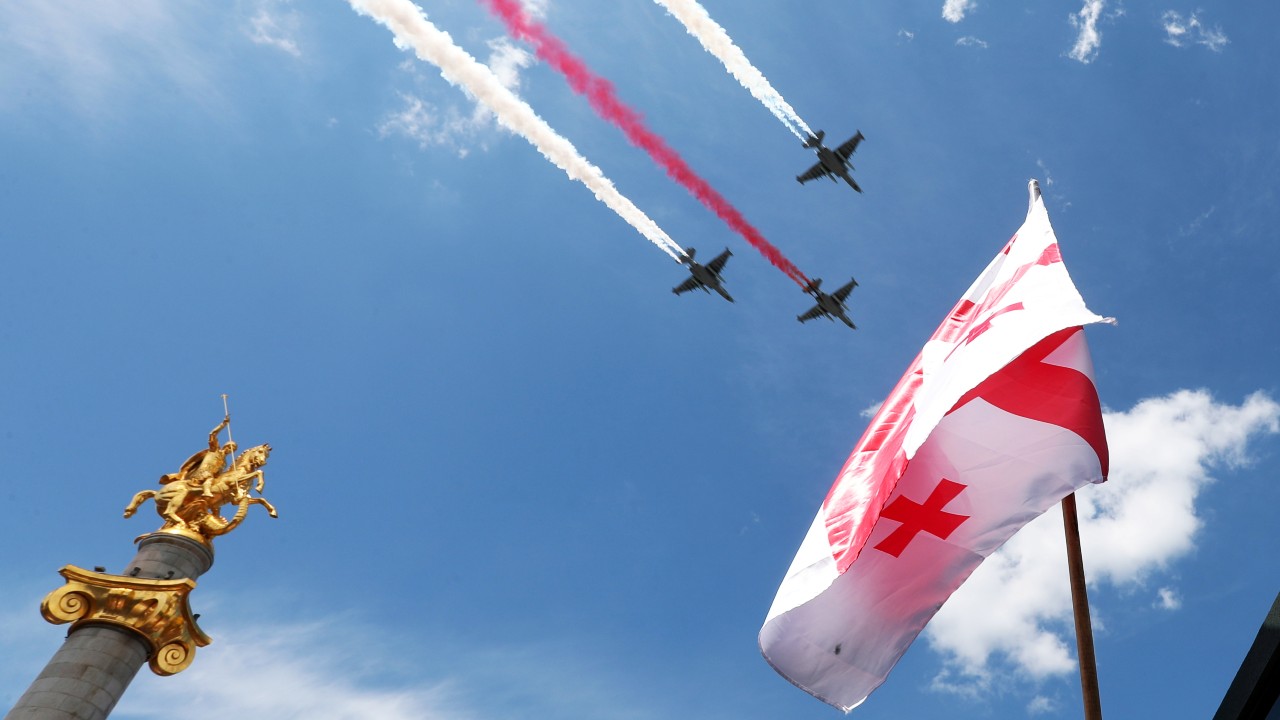 Photo: Georgian military jets release smoke in the colours of the national flag during the Independence Day celebrations in Tbilisi, Georgia May 26, 2021. Credit: REUTERS/Irakli Gedenidze

NATO aspirations require military efficiency. This includes having a proper air defense system and an effective army to withstand foreign aggression (at least in the initial stage) and helping allies when necessary.

Georgia is currently undertaking extensive military re-molding and one such area has been air defense, a known weak spot. The Russian invasion of 2008 highlighted the holes in air defenses, allowing Russian aerial superiority to target and destroy Georgia’s defense capabilities. A swift defeat followed.

It took almost a decade to initiate a meaningful improvement. In 2015, Georgia signed a contract with Thales Raytheon Systems for several French-American 3-D mobile air target detection radar systems – Ground Master 200 and Ground Master 400. The radar stations come with Renault truck defense chassis and are capable of controlling airspace at distances up to 470km and at altitudes of up to 30km. Later that year a second contract was signed with MBDA France — part of Europe’s leading developer and manufacturer of missile systems — for the purchase of the VL MICA short-range surface-to-air missile system. The cost of the agreements has been reported as $82m.

But there are concerns too. Air defenses are costly and considering the economic troubles the country experiences both because of the pandemic and generally tourism-oriented economy, it is unclear if Georgia has managed to establish a fully capable, state-of-the-art system. Air defenses are a constantly evolving sector, requiring updates to remain effective, raising the question of just how effective its technology would be in the event of renewed hostilities with Russia.

The issue has been raised anew by last year’s conflict in Nagorno-Karabakh, where numerous reports filtered through on the alleged ineffectiveness of Russian air defenses in Armenia’s service. Considering Armenia’s staggering military expenses have been throughout the years, it is disconcerting to realize that it appeared unable to defend itself against Azerbaijan’s Israeli and Turkish modern drones.

The Second Karabakh War spurred debates and in some cases reconsideration of tactics (and not just in the Caucuses — Western militaries have also been taking a close interest.) The successful use of drones and swift military advances in mountainous areas by Azeri troops upended some long-held basic ideas about modern warfare in the harsh Caucasian landscape.

Even before the conflict broke out, in September 2020 Georgia signed an agreement with representatives from the Israeli Ministry of Defense-affiliated Rafael Advanced Defense Systems (RADS). This will have been closely noted by Russia, since Georgia’s RADS-based systems have been battle-tested against advanced Russian weaponry (including MiG-29, Su-30SM, and Su-35S aircraft) through the experience of the Israeli Defense Forces (IDF) in Syria.

Most notably, the Karabakh war also underscored the need for advanced drones. Recently, Georgia’s defense minister says the country is in talks with Polish and South African companies to produce small and large unmanned aerial vehicles (UAVs.) The nascent industry will be based on the technologies of the DELTA, Georgia’s military scientific research center.

This follows the reports from early 2021 that DELTA’s partner and contractor company TAP Management had produced a Georgian drone capable of gathering intelligence information and carrying a payload of some 350 kg.

Georgia is still one of the smallest military spenders in the region, despite consistent annual budget growth. This deficiency will continue to constrain the country’s foreign policy. Facing a changing military and geopolitical balance of power in the region, the country needs to spend rationally, which means spending where it would make a difference. Air-defense and drone technologies are critical: Georgia could, if it acts thoughtfully, develop a home-grown industry, while altering foreign perceptions both for the region and — crucially — for the NATO alliance.