Georgia: How to Bake an Indigestible Democracy

Amid a deteriorating geopolitical situation from the Baltic to the South Caucasus, the West needs more refined and subtle policies 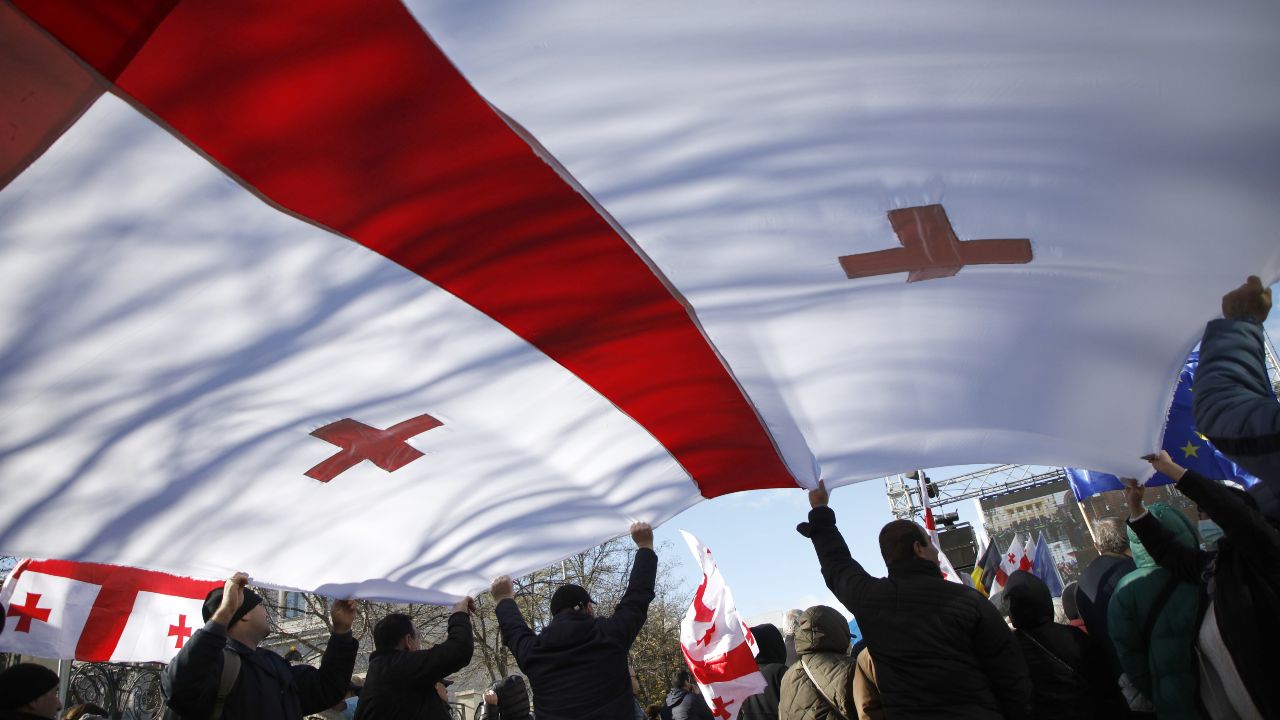 Photo: TBILISI, GEORGIA - DECEMBER 2, 2021: Former president Mikheil Saakashvili's supporters unfold a large Georgian flag as they rally outside the Tbilisi City Court during a hearing into his embezzlement case. He faces charges of embezzling some 9mln laris [~$2.9mln] in state funds in 2014. Earlier Saakashvili returned to Georgia shortly before the first round of local elections and was immediately taken into custody. Credit: David Mdzinarishvili/TASS.No use Russia.

Digital Democracy: Tech Can Strengthen Open, Free Societies Western Elites — Rubles Bought (Some of) the Best From Havel to Pavel: The New Czech President What’s a Russian? Rebuilding Ukraine: A Historic Plan for Congress Russian Media in Exile and Latvia: The Limits of Free Speech Understanding Islamic Education in Russia: The Struggle over Identity and Belonging in Russia’s Muslim-Majority Regions
Explore

Georgia has entered a new round of internal political instability. Though small and poor, the country matters, standing as it does on the frontline between the liberal and increasingly resilient and powerful autocratic world systems.

The latest worsening of events in Georgia follows the return to the country of the ex-president, Mikheil Saakashvili, who had been convicted in his absence of a brutal crackdown on protesters in 2007 and was sentenced to six years’ imprisonment while in exile. His reappearance, imprisonment and hunger strike just as local elections were underway caused thousands of demonstrators to flood the streets and for the perpetually warring political parties to launch another, and more serious, round of hostilities.

The country was already tense. The ruling party is under pressure following poor results in the municipal vote, and now as a result of Saakashvili’s court process, which began on November 29. Increasingly the only way out of this spiral of instability might be snap parliamentary elections. While it is unlikely to solve all problems, it could nevertheless help to de-escalate tensions.

Failure to do so could push the country onto a more radical trajectory where one political group could seek to consolidate power and exclude rivals. This would clearly be deeply traumatic for a young democracy and could turn very ugly indeed, especially for the new, proliferating opposition groups. Georgia has always seen new groups established since its independence in 1990, but the present situation marks an altogether richer period of political fecundity.

Political competition is becoming fiercer, which creates the conditions for greater popular political participation, especially as the threshold for entering parliament through elections was cut from 5% to a much lower barrier (as low as 1% for seats decided by proportional representation.) This of course means increasing resistance to the government in parliament, at the municipal level, and on the street. An era of true political pluralism has begun in Georgia.

Further pressure on the ruling class is generated by significant generational change. A greater number of younger politicians are actively participating in the country’s political life. For example, in United National Movement, Georgian Dream, and other smaller parties, a near-complete change of top and mid-level leadership is underway. This also means that splinter parties emerge, like the libertarian Girchi More Freedom group, which recently hired a Turkish witch to curse the Georgian Interior Ministry for arresting its members. Or completely new ones, such as For Georgia, are created. Predominantly born in the 1980s and the 1990s, younger politicians’ arrival is an important development as the very fabric of political activism in Georgia undergoes structural change. As a result, figures such as Saakashvili, 53, and Bidzina Ivanishvili, 65, leader of the Georgian Dream party, are becoming less attractive and their appeal is now gradually decreasing. And although Georgian politics still largely revolves around individual political personalities, there are indications that greater attention is being paid to what each new party might offer to segments of the population. In other words, the shift from older generations to younger also means a change in how politics are made and perceived; populism is slowly losing its appeal. Increasingly, a more professional approach is being demanded by the population.

These two interrelated developments could only be reversed through radical centralization of power in the hands of one political party. And illiberal trends are indeed picking up pace. Just recently the “the Conservative Movement” was founded by leaders notorious for their anti-liberal, anti-LGBT, and anti-Muslim positions (about a tenth of Georgians are Muslim.) More importantly, the growing anti-liberal reaction has a geopolitical dimension. For instance, the new party is openly pro-Russian and seeks the reestablishment of Russian military bases on Georgian soil, closed in 2007 after two centuries. (Russia has maintained bases in the occupied Georgian regions of Abkhazia and South Ossetia since the 2008 war.)

And here the West can play a critical role. While military and security cooperation with Georgia is important, a more nuanced approach could make a far greater difference. An emphasis on the promotion of democratic values should be made. Linked to this, the West should do more to promote the strengthening of state institutions such as the judiciary, the electoral system, and anti-corruption agencies (which, incidentally, would also create a more promising environment for Western investment.) It is three decades since the Soviet Union imploded, but its constituent states still lack resilience and continuity of institutional tradition. In the longer term, help in these areas would be more practical and effective than outright military support.

Resilient institutions provide flexibility in both the foreign and internal policy realms. These provide stability and strengthen the state’s skeleton so that its functions rely less on whatever government is in power. That too would offer less space for external manipulation. And institutional elasticity makes hybrid warfare less threatening.

This is exactly what Georgia (like Ukraine and Moldova) lacks when faced with growing Russian pressure along the arc of instability it has tried to foster on its borders. All indications point to one undeniable conclusion: that the Russian government presently sees a window of opportunity is opening amid the West’s perceived decline, and that it is an opportune moment to make major advances and push back against the liberal order. As Putin stated at the Valdai Conference in October: “The re-alignment of the balance of power presupposes a redistribution of shares in favor of rising and developing countries that until now felt left out. To put it bluntly, the Western domination of international affairs, which began several centuries ago and, for a short period, was almost absolute in the late 20th century, is giving way to a much more diverse system.”

The West should be cleverer. It is clear that outperforming the Russian military is a daunting task in an age when the West fears military engagement and has China to focus on. But what Russian hybrid tactics, or even outright military action, could not counter or consume is a vibrant and aspiring young democracy. Georgia is such a country, but it needs Western help in this difficult period.