Georgia: Balanced on a Knife-Edge

Georgia fears Russian military power but needs to side with the West against Russia’s invasion of Ukraine. 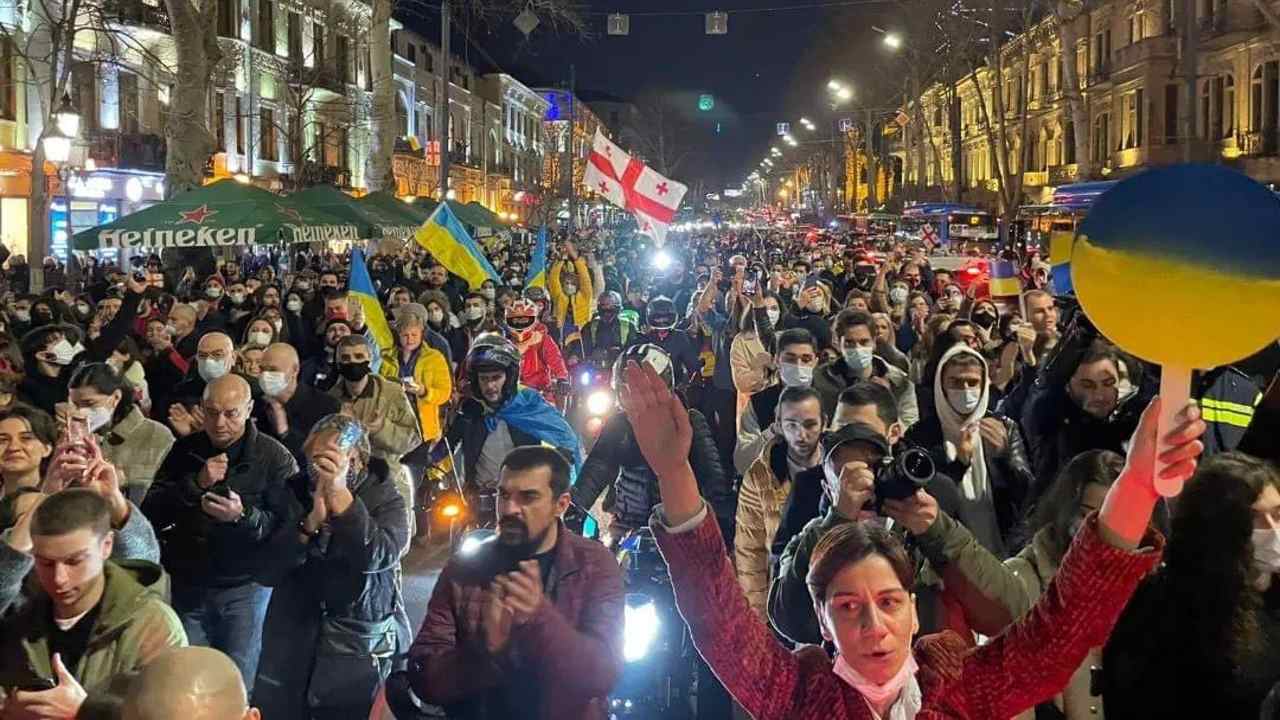 Photo: Protest in Georgia against the Russian war in Ukraine. Credit: Mariam Kasrashvili via Twitter

Russia’s war on Ukraine transfixes the world, and for obvious reasons. The sheer brutality and the size of the attack on Europe’s second-biggest state grab all the attention. But under the radar, there lurks another place where Russia’s actions are closely watched, feared, and even anticipated should the offensive in Ukraine present even short-term opportunities to the Kremlin.

Georgia is the other country mentioned in Russia’s security demands made in December and addressed to NATO and the EU. The country has waged war with Russia — in 2008 — has been invaded and has two regions occupied (Abkhazia and Tskhinvali Region, often incorrectly referred to by the Soviet-invented term of South Ossetia.) As you would expect, Georgia is focusing very closely indeed on developments.

Russia’s decision to confront its “Ukraine problem” is only a part of a larger program of pushing Western influence away from its immediate neighborhood and restructuring the European security order. And Georgia is a critical piece of the puzzle. The fear is that if Russia is victorious, it would turn its attention to Georgia. An immediate military campaign is unlikely, but the Kremlin might plausibly extend demands that the country renounces the promise made through NATO’s 2008 Bucharest summit that it will one day become a member. Russia could use its small, but heavily armed forces in Abkhazia and Tskhinvali to threaten Tbilisi, which is some 50-60 kilometers away from the occupied zones.

This fits the new order Russia has been seeking in the South Caucasus following the Second Nagorno-Karabakh war of 2020. The 3+3 initiative which aims to gather together the three small South Caucasus states and Russia, Turkey, and Iran, is viewed with suspicion by most Georgians. But if Russia wins in Ukraine, Georgia may find it hard to resist the pressure.

This partially explains why the Georgian government has been so careful about its position on Russia’s invasion. The mood is febrile, as indicated by days of anti-government demonstrations following Prime Minister Irakli Garibashvili’s statement that his country would not impose sanctions on Russia. Later on, Georgian volunteers were reportedly prevented from flying to Ukraine (later denied by the Ukrainian ambassador himself), which caused President Volodymyr Zelenskyy to recall his envoy from Georgia.

Internal pressures and wider geopolitical motives put Georgia in a precarious geopolitical position. It needs to simultaneously look attentively at how Ukraine-EU ties develop, not anger Russia, and also respond to wider pro-Ukrainian sentiment. Many remember how Ukrainian President Victor Yushchenko enthusiastically supported Georgia in 2008 and even visited the capital when Russian troops were just 30 kilometers away.

By attempting a nuanced approach, Georgia may be running a risk. In an age of near-unified sentiment against Russia, neutrality could be harmful to a country that made its formal application for European Union (EU) membership on March 3. The war in Ukraine also indicates the status quo ante is no longer feasible. The EU is now emerging as a geopolitical player following its actions against Russia in the last week and the European Parliament has backed Ukrainian membership. Moldova too has applied.

Much will depend on how far Russia’s invasion progresses in Ukraine. Cracks in Western resolve will only embolden the Kremlin and push it to act against other neighboring states seeking EU and NATO membership. This precarious geopolitical situation and Georgia is trying to walk a fine line.

But here a longer term perspective should prevail — the sudden and near-unprecedented Western unity of 2022 is likely to remain.

Russia is turning into what analysts refer to as a “fortress” and is preparing to launch a battle, non-military or otherwise, from the Baltic to the Caspian Sea. Despite its dismal military performance in Ukraine, Russia has significant military and intelligence capabilities; the West has enormous economic, diplomatic and soft power. In the end, the democratic world will prevail against a Kremlin that has painted itself into a corner.

How we get from here to there is a question that may present some difficult answers.