Gas for Russia’s Empire, Cash for the Elites

Behind the Kazakh protests lie a thuggish authoritarian state and a web of murky energy agreements that have made Russian and Kazakh elites wealthy. 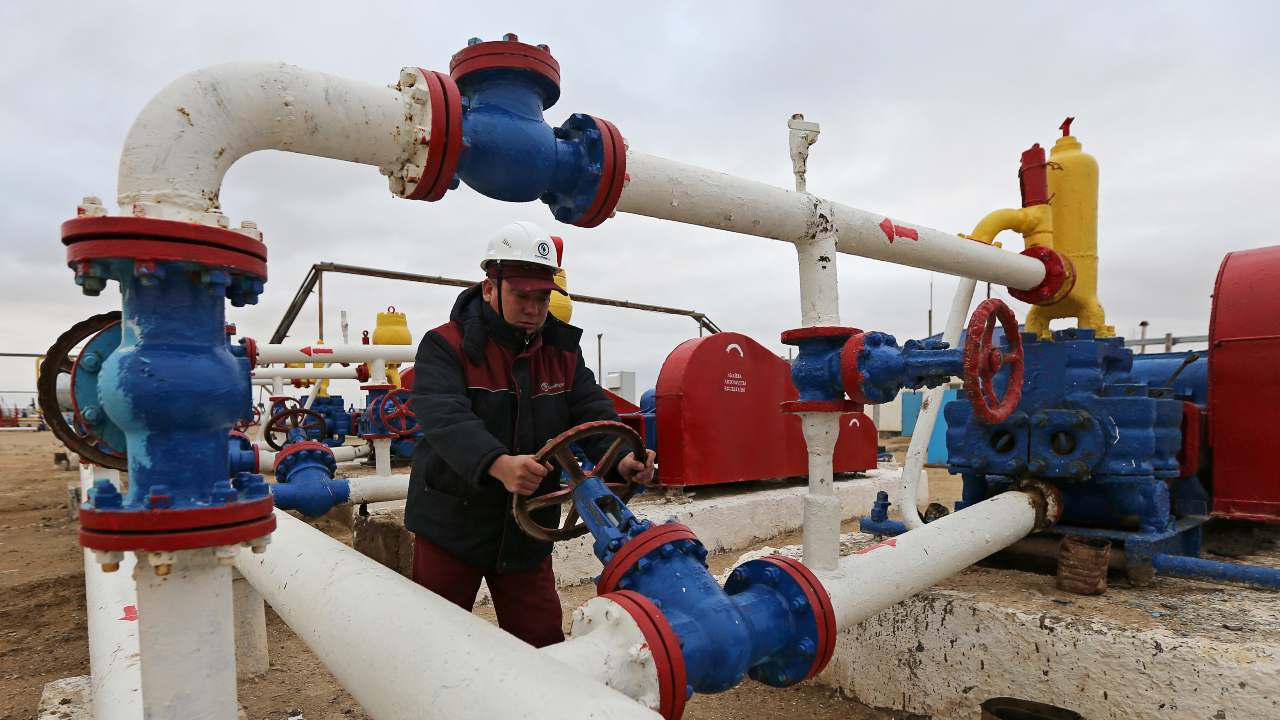 Photo: A worker checks the pressure of pumps at an oil-pumping station in the Uzen oil and gas field in the Mangistau Region of Kazakhstan November 13, 2021. Credit: REUTERS/Pavel Mikheyev

Kazakhstan’s protests began in early January after the price for liquefied petroleum gas (LPG) more than doubled from 50 Tenge to 120 Tenge (about $0.27) per liter. LPG is broadly used to fuel vehicles, but also for cooking and even heating. It is a mainstay of everyday life.

Demonstrations started in Zhanaozen, the oil and gas capital in the southwestern part of Kazakhstan, not far from the Caspian Sea, and within a few days spread across the whole country. Cities like the country’s biggest, Almaty (2m) in the south-west of the country, the industrial center of Aktobe (1.3m) in the north-west, on the Russian border, as well as Kyzylorda in the south were all swept up by the lightning-fast transmission of discontent. Cars and buildings burned, gunfire ripped through the streets, and statues of the decades-long president of Kazakhstan Nursultan Nazarbayev were dethroned.

Clearly panicked and with at least some of his security forces joining the protesters and official buildings under attack, President Kassym-Jormat Tokayev hurried to ask countries of Collective Security Treaty Organization (CSTO) for military support, which was almost immediately granted, and shortly afterward Russian paratroopers began to arrive.

Such a broad protest was not limited to anger about the LPG price. World Bank figures show that gross national income (GNI, which has replaced GDP per capita) fell from about $12,000 in 2014 to below $9,000 in 2019, a significant drop. Oil and gas have made Kazakhstan wealthy (national wealth has multiplied 8.5 fold since 2000), but income inequality is high and a quarter of the population is judged chronically poor. In other words, some Kazakhs are very rich, and many are not.

Kazakhstan is no democracy. Ruled from 1990-2019 by Nazarbayev, citizens exercise few political freedoms. A survivor from the communist era — Nazarbayev was appointed First Secretary of Kazakh communist party in 1989 — he won elections in the Soviet manner (taking 97.75% of the vote in 2015, his fifth presidential victory.) Finally departing in 2019, he remained the de-facto ruler, having installed Tokayev, a diplomat widely viewed as a placeman, in the presidential palace. In exchange, the state showered on Nazarbayev the adoration he very obviously craved; he became Head of the Security Council, was declared Yelbasy, or “the Father of the Nation,” while Kazakhstan’s capital city Astana was renamed to Nur-Sultan in a unanimous parliamentary vote.

The Criminal Code of Kazakhstan was amended to protect the Yelbasy from insult from that small minority of the nation (2.25%, see above) who might not hold him in high regard. Article 373 allowed imprisonment for up to two years for insulting the Yelbasy, his portraits, and other images, and up to five years for “pressure on the Yelbasy or members of his family.” There is more: Article 374 allows up to five years in jail for violating the immunity or means of communication, cars, apartments, or bank accounts or papers of the Yelbasy and his family members.

Opposition parties in Kazakhstan are virtually non-existent. Nazarbayev’s party Nur Otan (or Radiant Fatherland) won 82.2% of the votes in the parliamentary elections in 2014 and 71.1% in 2021. Amid this level of authoritarian misrule, it is no surprise that bottled-up national anger exploded from the smallest spark.

So what are the underlying causes? The LPG price problem is a good example of how Kazakhstan’s authoritarian rule has ruined the local economy. LPG price liberalization should not have had such a devastating effect.

As a significant oil and gas producer, Kazakhstan produces much more LPG than it consumes. Yet existing plants mostly export LPG, without selling to the domestic market. For example, Kazakhstan’s largest LPG producer Tengizchevoil, a joint venture with Chevron, ExxonMobile, Lukoil, and Kazmunaigaz, exports all the LPG it produces. Clearly aware of the problem, the country sought to increase LPG supply through massive purchases from Russia — but Russian companies sold it at prices 3-8 times higher than the domestic rate. The situation was worsened by the fact that many Kazakh liquefying plants are in a poor condition. For example, the only LPG plant in the Mangistau region — where the protests began — was built in 1973, and the deterioration of its equipment has very seriously reduced output, according to the company.

At first sight, the LPG price rise decision seems perfectly normal — an economically unsustainable internal price has exploded due to market liberalization: an unpleasant, but a natural process. In many countries, that might be the case, but not in Kazakhstan. As another of Russia’s neighbors, Ukraine, found in the 2000s, a chain of corrupt practices (benefitting local elites) meant “socially acceptable” low gas prices, but also caused dangerously high debts with Russia, whose gas exporters were making huge profits.

The gas supply contracts between Kazakh and Russian companies are also murky, built on shady and undisclosed agreements. Kazakhstan may be a regional energy superpower in terms of gas and oil production, but even so, it massively depends on Russia. Since 2007, the two countries have used the KazRosGaz joint venture, to buy gas from Karachaganak field in Kazakhstan, send it all the way to Orenburg in Russia, where it is processed and partly resold to Kazakhstan. Since 2020, Russia’s Novatek liquefying gas plant in Chelyabinsk, on the border with Kazakhstan, has also sold LPG to Kazakhstan.

Such re-export deals — monetized or not — are a standard Russian approach. The Gazprom subsidiary, Gazprom Export, also delivers Kazakh gas to Kazakhstan’s Aktyubinsk and Kostanay regions. In 2020, Gazprom Export obtained 5.7 billion cubic meters (bcm) of gas in Kazakhstan and delivered to Kazakhstan 3.4 bcm — based on the same contract.

According to Nazarbayev’s grandson, the late Aisultan Nazarbayev, a former Kazakh intelligence officer, such agreements are used to fund senior Russian politicians, including Vladimir Putin, and Russian gas executives. Before his death from cardiac failure at the age of 29, Nazarbayev Jnr. claimed that Kazakh was sold “for a penny” and the profits of around $1.5bn funneled to the Russians, while the Nazarbayev clan received about $700m.

Aisultan Nazabayev was married to the daughter of KazRosGas Russian-Kazakhstan gas joint venture head, Kayrat Boranbayev. Aisultan admitted to drug abuse, a point emphasized by Kazakh Information Minister Dauren Abayev when the allegations were first made. “It’s not fair to speculate on the fantasies of an addict just because he is the grandson of the First President,” he said. “Unfair and beyond morality. It’s time to close this topic.”

Kazakhstan plans to increase its dependency on Russia. In October, Russian Deputy Prime Minister Aleksandr Novak and Kazakhstan’s Minister of Energy Magzum Myrzagaliev discussed a deal for the construction of new gas pipelines to Kazakhstan in order to import another 2.3 bcm of natural gas annually.

This scheme is not wholly dissimilar to classic 18th-century colonial models, with the more advanced country extracting resources — often through legal contracts with local elites — only to re-sell finished goods back to them, at a substantial profit. The deals are in some respects inevitable, in that most pipelines run to Russia and the domestic network is under-developed. But of course, Kazakhstan had more than enough money to correct this, had it wished.

Russia has other significant interests in the country. Among the list of entities that Russian forces rushed to secure following their intervention was Kazatomprom, a state-owned company that is the world’s largest uranium producer of uranium. It is responsible for more than 40% of the world’s supply. As Russia aims to become an energy superpower and the world leader in nuclear power, control over uranium supply matters. As does its long-lease Baikonur cosmodrome (though reports suggest it was poorly guarded by staff who recently had their wages cut), which the Kremlin hopes will continue Russia’s long history of space exploration.

Sergej Sumlenny, 41, is a German political expert with a particular focus on security and energy policy in Russia and Eastern Europe. In 2015-2021, he was an Office director for Ukraine and Belarus at the German Heinrich-Böll Foundation. He holds a doctoral degree in political science.