Europe is building ever-closer ties with India to counter Chinese ambitions, but Modi’s authoritarian behavior could yet damage a promising strategic alliance. 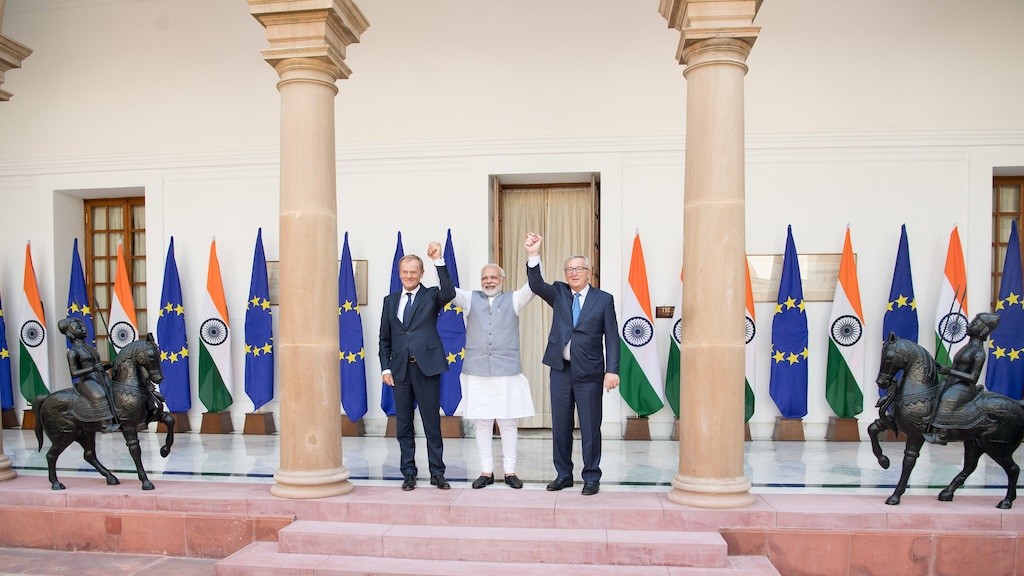 Once upon a time, the arrival of foreign fleets off its shores was a sign of the Indian subcontinent’s vulnerability. Now they signal India’s strength.

The United States has been fostering its relationship with India for years — especially during the second Bush administration — but its increasing tempo of work with the Indian military has now been reinforced by a rising drumbeat of activity from European nations. In April, a French carrier-led task group conducted exercises with Indian warships, while naval vessels from the “Quad” of the U.S., Australia, India, and Japan have also joined up with French ships this year. A British carrier-led task group, including U.S. and Dutch elements, exercised with the Indian navy last month. As the Times of India noted, these exercises are aimed squarely at China.

And there is a good reason for that. Last year, at least 20 Indian soldiers and an unknown number of Chinese troops died in hand-to-hand fighting in Ladakh, the so-called roof of the world, where the two countries have faced off in an uneasy truce since the war of 1962. That is one of several developments that have made India’s long-held policies of strategic autonomy and strategic hedging increasingly untenable.

France in particular, the EU’s only globally capable military power, has led European efforts to build better relations with India. While France has no intentions of formally joining the Quad, Europe and India have been quietly strengthening economic, political, and security ties.

Chinese information operations around covid-19, the termination of democracy in Hong Kong, and the deadly border skirmishes have helped align European and Indian interests. These largely unremarked developments in the relationship show Europe’s rising concerns about China’s influence, even if they are mostly unwilling to say so publicly to avoid damaging economic ties. These efforts have been undertaken not only at the EU level but also at the national level, notably through India’s defense ties with France and economic ties with Germany.

Europe’s links with India were relatively limited until the mid-2000s when India increased its diplomatic outreach, becoming an ever more attractive partner as its economy blossomed. The EU has since become India’s top trading partner and today remains the second-largest destination for Indian exports. To boost trade ties further, in May 2021, the EU and India resumed negotiations for a trade deal that has been in the works for years. This announcement took place alongside Prime Minister Narendra Modi’s May meeting with the 27 EU national leaders, an opportunity denied to Chinese leader Xi Jinping since the start of covid-19. A successful agreement is a long way off, but restarting free trade negotiations with India while the EU’s Comprehensive Agreement on Investment (CAI) with China falters sends an important signal about the EU’s prioritization of its geo-economic relationships in Asia.

For the first time, there is also an EU Strategy for Cooperation in the Indo-Pacific. While no country, including India, is mentioned more than once, it is notable that the EU is even calling the region the Indo-Pacific, terminology that the U.S. has used to signal the growing importance of India in its regional strategy to compete with China.

Cooperation with Europe now spans a wide range of areas, including 5G, artificial intelligence, emerging technologies, Indian Ocean maritime security, and alternatives to China’s Belt and Road Initiative. In public, European leaders may be pushing for the increasingly imperiled CAI, but these agenda items make clear that both sides are worried, especially in the technology space. The EU has also helped India during the worst moments of the pandemic, using its Civil Protection Mechanism to fast-track supplies to the country during the second wave of the virus.

On the bilateral level, Germany remains India’s largest single-nation trading partner in Europe and the two recently signed a Defense Cooperation Agreement. Other defense cooperation agreements have been signed or are in the works with Italy, Poland, Portugal, Sweden, and the UK. France is still India’s most important defense partner in Europe, and increasingly an all-around strategic partner, with both countries receptive to arguments of keeping some independence from U.S. hegemony. A Defense Logistics Agreement in 2018 gave each country’s military greater force posture flexibility on bases across the Indian Ocean and South Pacific.

This is a warning sign for China. Despite close relations with Pakistan, Sri Lanka, and Myanmar, it has long worried about an alliance of countries seeking to contain its rise.

Nonetheless, there are still serious challenges in the Indian-European relationship. As long as leaders like the German Chancellor Angela Merkel believe they can separate economic and security issues in their relationship with China, defense ties with India can only proceed so far for fear of angering the Beijing leadership. For countries across Central and Eastern Europe who are especially fearful of Russia, there is distrust of the enduring strength of Indo-Russian defense ties.

The most serious issue may be India’s authoritarian and nationalist turn under Modi’s leadership. Violations of Muslim civil liberties by Modi’s ruling BJP and restrictions on freedom of speech are serious challenges to democratic governance and institutions in the world’s largest democracy. Since the U.S. increasingly appears to be chiefly concerned about great power competition with China and is constantly pushing its European allies to increase their presence in the Indo-Pacific, it should welcome Europe’s growing ties with India and push both sides to be more vocal about why they are improving their ties (e.g. concerns about China.)