Estonian journalism students who participated in the Uppsala (Sweden) University International Summer School between 10-16 June discovered that their course was actually pro-Kremlin and pro-Assad propaganda, one that praised the Soviet Union for standing for peace and accused the West of promoting war. The university has apologized to its partner universities, but the problem is […] 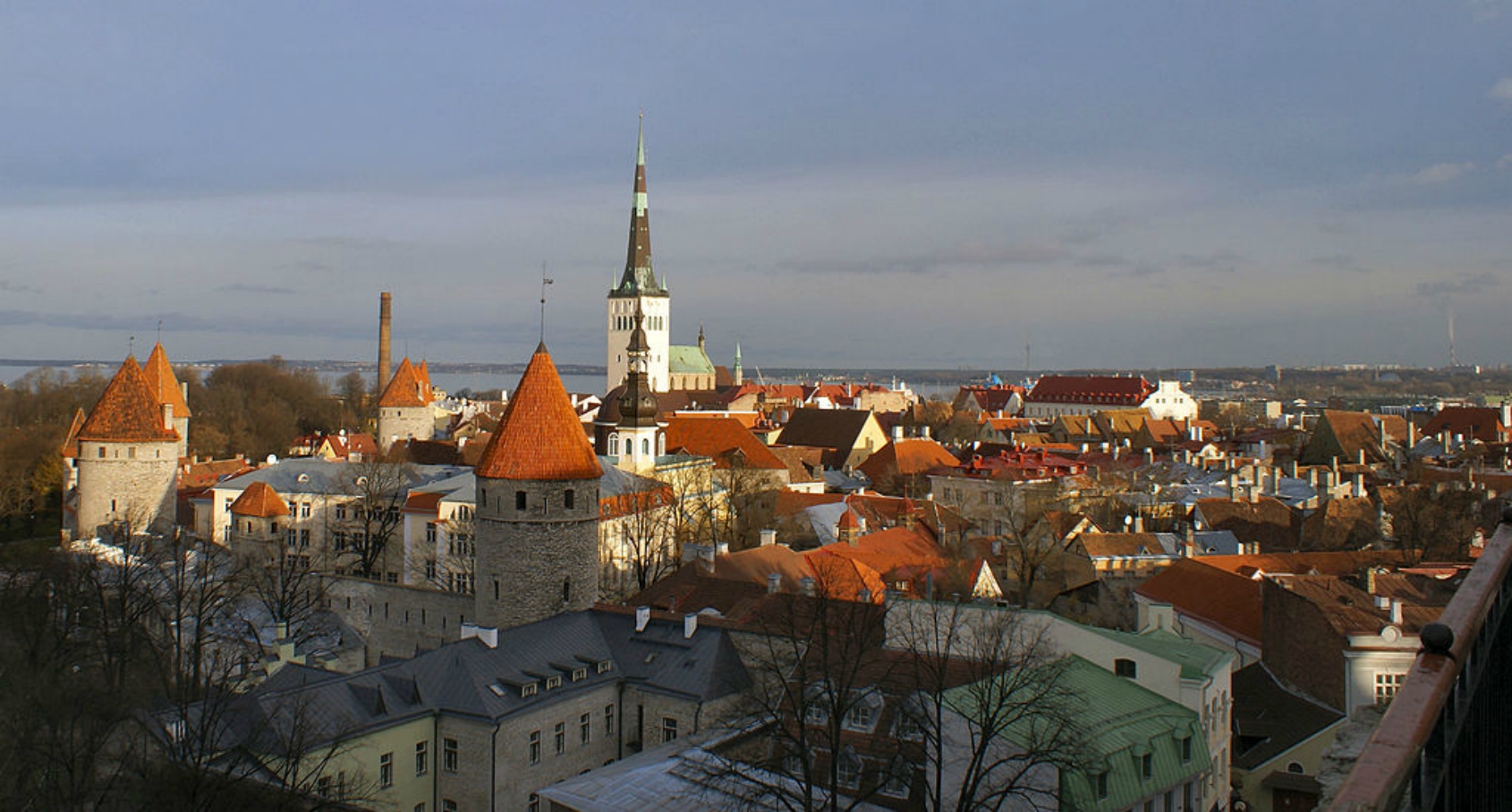 Estonian journalism students who participated in the Uppsala (Sweden) University International Summer School between 10-16 June discovered that their course was actually pro-Kremlin and pro-Assad propaganda, one that praised the Soviet Union for standing for peace and accused the West of promoting war. The university has apologized to its partner universities, but the problem is wider than just one summer program. Academics who participate in narrative laundering and expose students to Kremlin propaganda justify their approach as providing an alternative to the viewpoint that is provided by Western governments and the mainstream media. But curricula built on demonstrably false “alternative” viewpoints simply give a green light to disinformation and conspiracy theories.

In the course, students from Estonia, Latvia, and Lithuania were presented with conspiracy theories and pro-Assad and pro-Kremlin disinformation by Vanessa Beeley, a British blogger and frequent contributor to Kremlin-owned RT and Sputnik. Estonian students who objected to the course asked Beeley to send them the slides she used for the lecture. Even though some of the slides were removed before they were sent, the remaining 66 give an insight into Beeley’s narrative.

The slides show that Beeley asserts that the Soviet Union and its legal successor, Russia, have stood for world peace, while Western governments have fueled the conflict in Syria and conducted war propaganda. International organizations and the Western mainstream media that claim otherwise are not trustworthy, and are less reliable than the Russian media.

Beeley began her presentation with a slide on Soviet law from 1950 stating that war propaganda is the “gravest crime against humanity,” and that a person who is guilty of war propaganda should be punished for having committed a serious criminal offense. 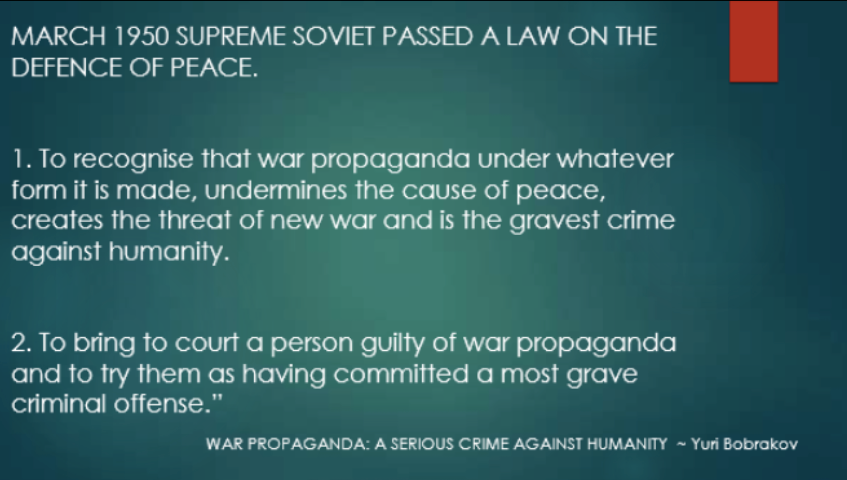 Slide No. 4 of Vanessa Beeley’s lecture “War Propaganda: A Crime Against Humanity?” given at Uppsala University Summer School “War and Peace Journalism in an Age of Global Instability,” 10-16 June 2018.

Next, Beeley presented a slide showing that the Soviet Union made a proposal to denounce war propaganda at the United Nations General Assembly in 1953, but was blocked by Western states. 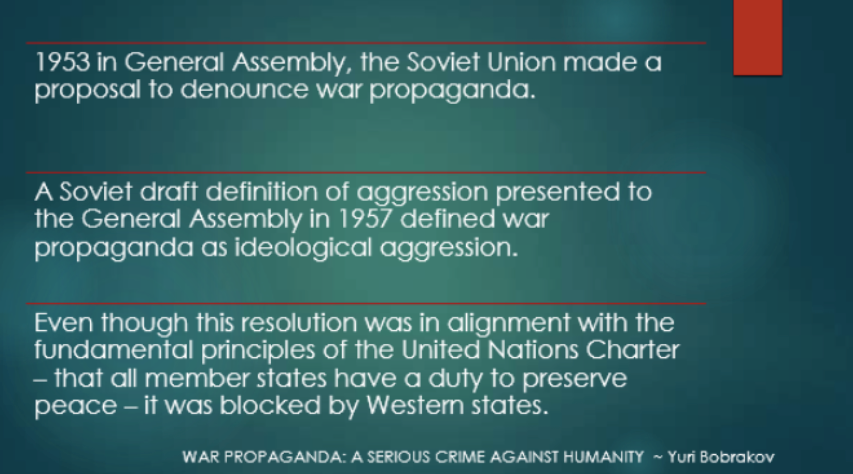 Both of these slides – and the title of Beeley’s lecture– refer to Yuri Bobrakov’s article, “War Propaganda: A Serious Crime Against Humanity,” published in the journal Law & Contemporary Problems in 1966. At the time of writing, Bobrakov was a press attaché at the Soviet Embassy in Washington, DC.

The Soviet Union’s proposal to denounce war propaganda was part of its peace campaign during the Cold War, carried out by the World Peace Council. The Council was set up and directed by the Soviet Communist Party to promote the USSR’s foreign policy goals. The main goal of the movement was opposition to NATO, which – as claimed by leading Soviet ideologist Mikhail Suslov at the third meeting of the Council in 1949 – “represents a threat to all progressive mankind.” In 1947, Andrei Zhdanov, a Soviet Communist Party leader and cultural ideologist, postulated the ‘two camp’ thesis: a world irreconcilably divided between the peace-loving progressive forces, championed by the Soviet Union, and the warmongering capitalist countries, spearheaded by the United States. This sharp dichotomy between the peace-loving USSR and the imperialist war advocated by the West was a cornerstone of Soviet foreign policy and provided the context for Bobrakov’s 1966 article. Beeley’s slides followed the same dichotomy. After claiming that the Soviet Union and Russia have always promoted peace, she presented the tactics that, according to her, the U.S. and UK and their apologists employ in advocating war.

Next, Beeley uses Anne Morelli’s “Ten Commandments of Propaganda” to show how propaganda is developed by the U.S., UK, and other NATO member states. 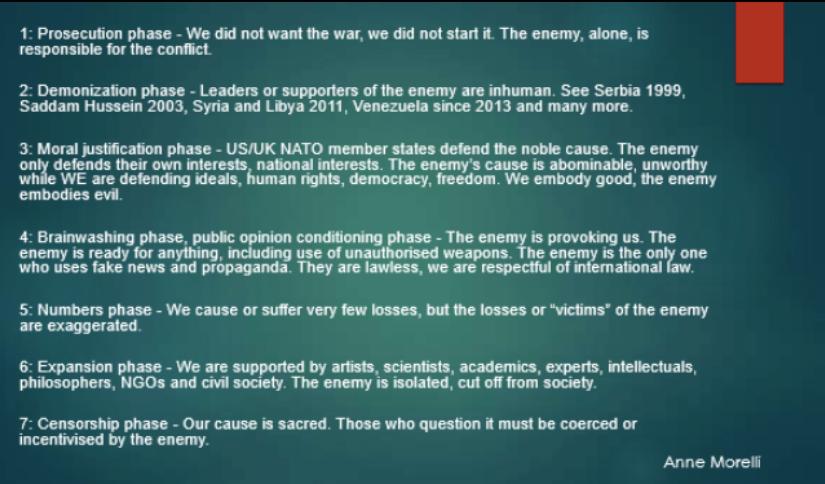 In later slides, Beeley turned to the ongoing war in Syria and the UK government’s Syria Resilience CSSF Programme, which supports the Syria Civil Defense (SCD) organization – the White Helmets – a volunteer organization that operates in parts of rebel-controlled Syria, rescuing locals trapped by bombing and evacuating civilians from danger areas. According to the Syria Resilience CSSF Programme, Human Rights Watch, and Amnesty International, the White Helmets are the most reliable source for reporting on the war in Syria. But Beeley claimed that neither Human Rights Watch nor Amnesty International are trustworthy and, repeating the statement of Francis Boyle, she called Amnesty International a tool for “the imperialist colonial and genocidal policies of the United States, Britain, and Israel.” Beeley claimed that instead of being a volunteer rescue unit and reliable source, the White Helmets are a propaganda unit and “part of the NATO war machine to justify NATO countries’ war against Syria.”

This false narrative is not new – the Assad regime and Kremlin-linked media have repeatedly targeted the White Helmets with disinformation attacks – and it fitted into Beeley’s larger narrative about peace-loving Russia and aggressive NATO countries. 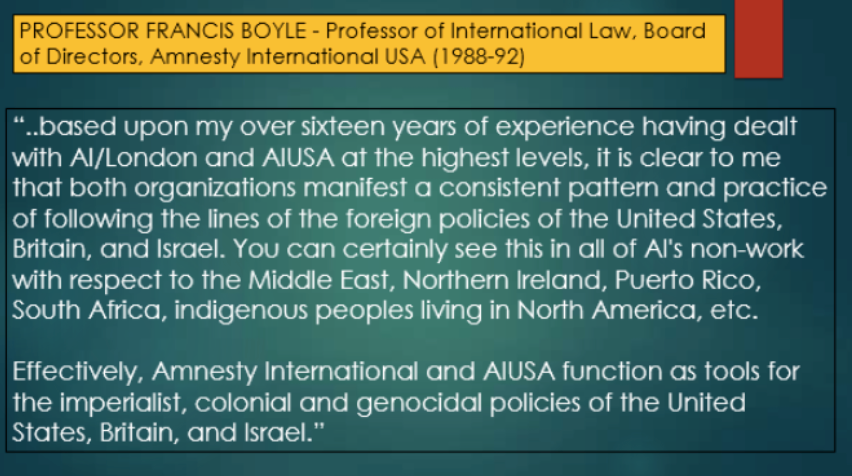 Another slide deleted from the version of her presentation that Beeley distributed to students alleged that the Human Rights Watch is a fake organization funded by Jews and run by the Washington “elite.” (The Estonian students made a photo of the slide during the lecture.) . 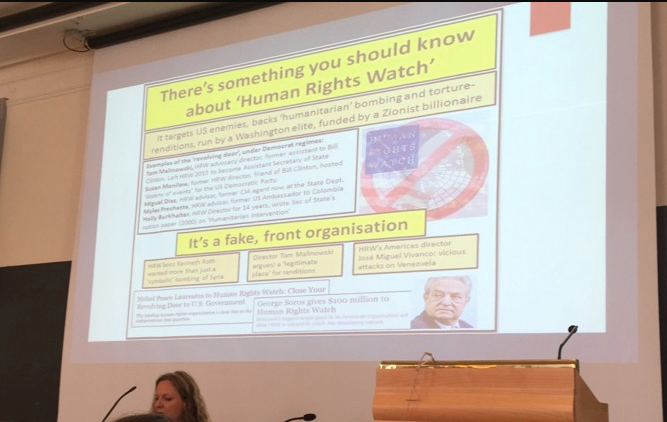 Deleted Beeley slide. The photo is taken during the lecture by Estonian students.

After the Estonian journalism students went public with the story and it received coverage in a local Swedish newspaper, Uppsala University said it would apologize to its partner universities. According to the head of the university’s Russian and Eurasian Studies Institute, Claes Levinsson, the institute had no prior knowledge of Beeley’s views and had no reason to believe that organizers would turn the summer program into a pro-Assad and pro-Russian event.

But the program’s organizer, Gregory Simons, assistant professor at the Russian and Eurasian Studies Institute, saw no reason to apologize. According to Simons, Beeley was invited to provide an alternative viewpoint. Simons is a member of the Working Group on Syria, Propaganda and Media, a group of academics (mostly British) that has been critical of the West and friendly to Russia. Members of the group appear frequently on Sputnik, and often cite Beeley and Eva Barlett, both frequent contributors for RT.

After the Estonian students’ story broke, on 29 June, Sputnik published an article in which Beeley and the editor-in-chief of RT and Sputnik, Margarita Simonyan, ridiculed the Estonian students, accusing them of being rude, cruel, intolerant, lacking critical thinking skills, and of trying to create divisions between other Estonian and Lithuanian students at the university. Moreover, Beeley and Simonyan accused Estonia of pushing anti-Russian propaganda.

There are four noteworthy aspects of this case.

First, the students’ reaction to Beeley’s lecture shows that Western countries are not as defenseless against disinformation and propaganda as it may seem. By recognizing them, publicizing them, and debunking them, propaganda threats can be resisted.

Second, the reaction of Kremlin media to the incident showed the role that Beeley plays for Sputnik. The fact that the chief editor of RT and Sputnik took a strong stand in defense of their contributor shows that the Kremlin media considers Beeley to be valuable. The techniques used here – ridiculing, personal insults, and whataboutism – are frequently used by Kremlin-aligned media.

Third, Uppsala University’s Russian and Eurasian Studies Institute, Gregory Simons and Vanessa Beeley happened to participate – knowingly or not – in a narrative laundering process that aims to bolster the academic credibility of Kremlin narratives and conspiracy theories in the West. The academics at the Working Group on Syria, Propaganda and Media do the same, and this episode is simply one example of a much wider problem.

Finally and most importantly: the rule of quality journalism and academic debate that requires that opposing viewpoints be presented has started to work against its original meaning. This rule, based on the idea that diverse opinions are unavoidable, necessary, and can help to reveal the truth, is beneficial only so long as the viewpoints meet some basic criteria: they are not deliberately deceptive, and have some basis in fact. Academic freedom and journalistic rules should require the presentation of different viewpoints, but only if they are factually valid. Beeley’s argument are not. The rule of balance, when exploited by propagandists and conspiracy theorists, is a means of deceiving the audience if it does not provide accurate information.