Sweden and Finland thought they had a deal with the mercurial Turkish President on alliance membership. Not yet, as it transpires. 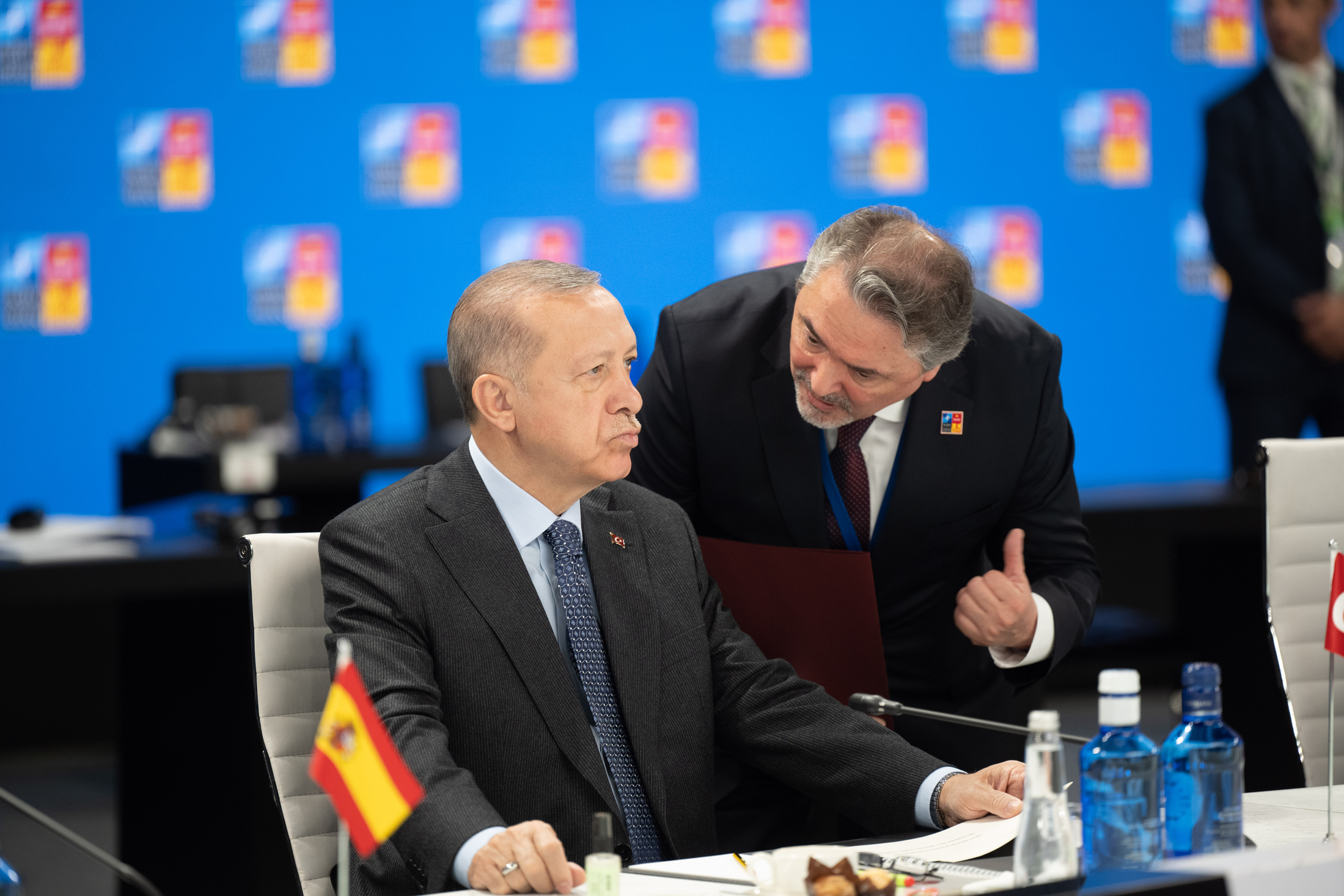 Photo: Recep Tayyip Erdoğan (President of Türkiye) from the Meeting of the North Atlantic Council at the level of Heads of State and Government. Credit: NATO. https://www.nato.int/cps/en/natohq/photos_197230.htm

When Finland decided, last spring, that it wanted to apply for NATO membership, it was clear that its friend and neighbor Sweden had struck NATO gold. Russia’s invasion of Ukraine created a pressing reason to join the alliance, which made applying for membership a comparatively painless affair back home.

And because Finland went first, Sweden didn’t have to bear the brunt of Russian anger, and anyway, the Kremlin was busy in Ukraine. NATO’s member states were eager to formally welcome the two countries at the alliance’s Madrid summit in July and to speed up their accession.

After the Madrid summit, alas, Sweden’s fairytale NATO accession ended. The positivity has stalled and Sweden’s NATO application is languishing (and with it, Finland’s application) because one NATO member state has decided to play hardball.

This had not seemed likely. On June 28, Sweden, Finland, and Turkey signed a memorandum of understanding that NATO Secretary-General Jens Stoltenberg had helped negotiate. The two Nordic countries promised to, among other things, “extend their full support to Turkey against threats to its national security. To that effect, Finland and Sweden will not provide support to [the armed Kurdish groups of the] YPG/PYD, and the organization described as FETÖ in [Turkey].”

They also promised to “address [Turkey’s] pending deportation or extradition requests of terror suspects expeditiously”, to investigate and intercept the financing of the PKK terrorist group in their countries, and to combat disinformation against Turkey. Three days later, Turkish President Recep Tayyip Erdoğan announced that Sweden had agreed to extradite 73 individuals Turkey considers terrorists, though it’s unclear whether Sweden or Finland (against which Erdoğan’s administration seems to harbor only minor reservations) had in fact agreed to a specific number of extraditions or the names of the individuals to be extradited.

At any rate, the MOU only stated that Sweden and Finland would address Turkey’s extradition requests, and that’s as much as the government of any liberal democracy can promise given that the independent judiciary decides on judicial matters. The fact that Turkey has legitimate national-security concerns concerning terrorism in its country was, of course, news neither to the Swedish and Finnish governments, nor to anyone else.

Since the breakthrough on June 28, Sweden and Finland have been working hard to fulfill their obligations, which Sweden now considers complete. But Erdoğan conducts diplomacy in a unique manner. He sometimes cooperates with Vladimir Putin; sometimes the two are daggers drawn. One month he saves countries around the world from food insecurity by shepherding through a Russian-Ukrainian deal that lets grain leave the Black Sea; another month he angers NATO allies with an unexpected solo move.

Yet he seems to manage to pull all his different strings in a way that produces results. And now, despite Sweden having fulfilled its obligations under the MOU, Turkey has not ratified its application or that of Finland.

Indeed, Erdoğan now expresses unhappiness that a Turkish dissident journalist now living in Sweden will not be delivered to his judicial system. Just before Christmas, Sweden’s Supreme Court denied the extradition request for Bulent Kenes, which Turkish Foreign Minister Mevlüt Çavuşoğlu labeled a “very negative” development. This appears to create an impasse. “They want things that we can’t and won’t give them,” Sweden’s Prime Minister, Ulf Kristersson, told a Swedish security conference this month.

Precisely because Erdoğan doesn’t prize a collaborative reputation among fellow leaders, he can keep engaging in this game of poker. That is, after all, the great advantage for leaders who really don’t care about smashing the diplomatic china. Turkey’s leader does not reach the extremes set by Vladimir Putin or the latter’s Belarusian friend, the dictator Aleksandr Lukashenka. But because he’s willing to cause anger across the alliance over his foot-dragging, he can continue to torpedo the Swedish-Finnish accession for as long as it suits him. And that, rather depressingly, may mean no progress before Turkey’s presidential election in June. (Hungary, the other holdout, looks likely to ratify the two countries’ bids far earlier.)

Sweden now hopes that the United States and other NATO countries will bear down forcefully on Turkey. The United States is certainly capable of applying plenty of pressure — for example by focusing on Turkey’s keen desire to buy new F-16 combat aircraft, which faces strong Congressional opposition because of its past behavior. But for Sweden, this is an early lesson in what membership in a collective-defense alliance entails. Even within a community of close allies such as NATO, there will always be cantankerous members needing to be accommodated.

For Sweden, and all Western countries, this unfortunate series of events is also a reminder of the turbulent years now awaiting the West. With the world splitting into two blocs, one led by the West and one by China, Western countries will need to woo and nurture geopolitical partners that may be far more infuriating than Turkey.

It will be a time-consuming and frustrating exercise. But as should be clear to all by now, history has not ended, nor has the non-Western world decided to imitate every facet of liberal democratic existence.