Georgia’s ambitions to join the Western community are at risk from a destructive domestic political environment that alienates future partners. 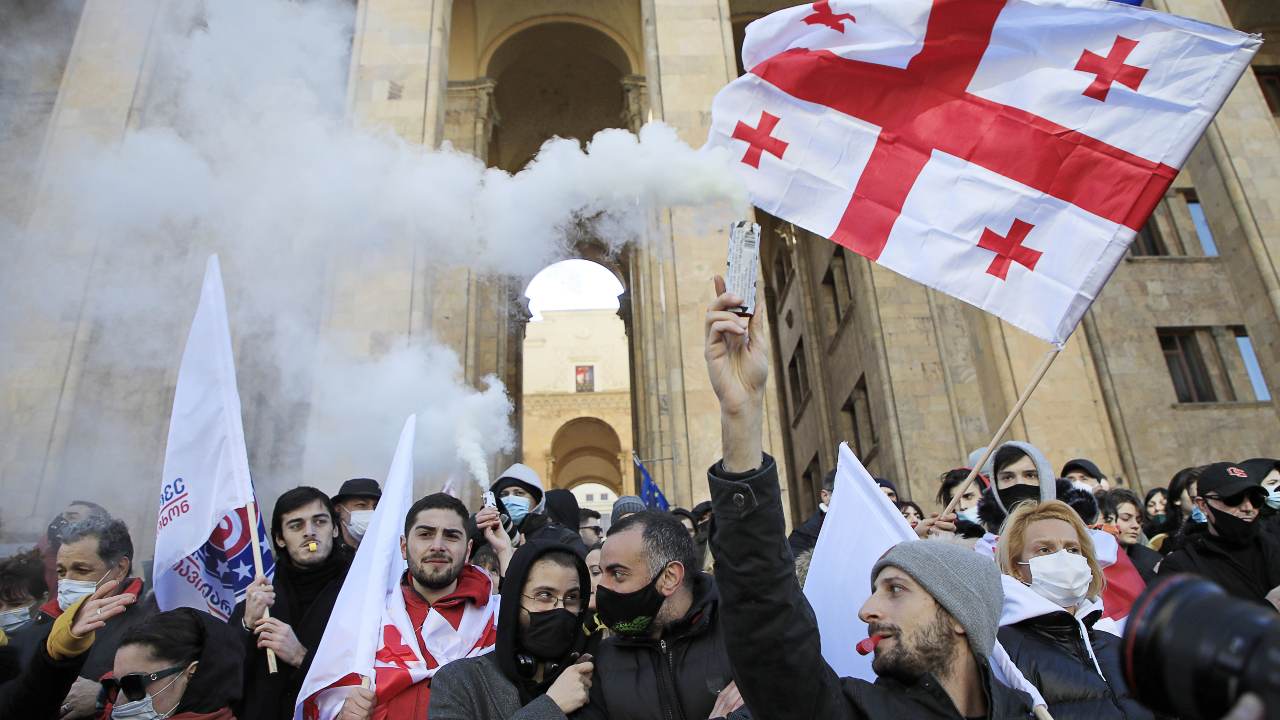 Photo: TBILISI, GEORGIA - FEBRUARY 23, 2021: People take part in a rally in support of Nika Melia, a member of the Georgian Parliament, outside the offices of the Georgian Parliament. Melia was arrested by officers of the Georgian Interior Ministry upon the ruling of the Tbilisi City Court. On February 17, the court ruled to put Melia back in custody for failing to pay a 40,000 Georgian lari [more than $12,000] bail in his case over civil disturbances during the June 2019. Credit: David Mdzinarishvili/TASS via Reuters Connect

The Kremlin’s demands were “unacceptable,” the Georgian Foreign Ministry said. It was the country’s, “sovereign decision to join NATO, one that is based on the unwavering will of the Georgian population. This aim is also reflected in Georgia’s Constitution.”

Yet the threat to Georgian membership may not come from Russia alone. The seemingly intractable internal political scene also creates risks and future problems. Does Russia really need to worry about a country that has been steadily distancing itself from the West by joining the ranks of illiberal states where democracy remains in form but not in essence, and where domestic political polarization threatens national cohesion?

Georgian Dream – the ruling party for an unprecedented third consecutive term — maintains that all is well and rumors about the death of democracy are exaggerated. And it is true that polarization is not new; elections are taking place (not well, but well enough to be deemed competitive); opposition parties abound; media is diverse and often critical; freedom of assembly is generally respected (unless you are gay); and an EU membership application is being prepared for 2024.

A closer look, however, reveals a country where democracy is being hollowed out by democratically elected leaders who bend the system to their advantage. The ruling party, emboldened by the latest victory in unfair but competitive local elections, began the new year by restricting the independence of judges through amendments to the Law on Common Courts, selecting Supreme Court judges using a flawed selection procedure, and abolishing the State Inspector Service, mandated to investigate police abuse and protect data privacy. While the government explained it intended to make state institutions more effective, the US Embassy described the move as undermining government accountability and sending the message that “independent oversight of the government or dissenting voices, even when prescribed by law, will be answered with retaliation, discipline, and dismissal.”

This is not an isolated case. Modern-day Georgia, like other illiberal regimes, now suffers from the following:

The resistance to democratic breakdown comes from strong institutions and well-developed political parties. Neither is present in Georgia where the main constraint on excessive power is the citizens’ inherent dislike of authority. Moreover, in a country where politics is highly personalized, the nature and the role of leadership is crucial. Georgia has never had its own Václav Havel to coolly explain to the nation its own failings, and possible solutions.

Georgia has never had a truly democratic leader who would contemplate shared governance and resist the domination of a single party. Instead, democracy in Georgia has always been a battle for supremacy. Add widespread poverty and inequality to institutional weakness and the zero-sum political culture, and we have significant obstacles to democratic development.

And yet, this can and should be reversed. Otherwise, Georgia’s European and Euro-Atlantic future will be a pipe dream, the country will drift toward authoritarianism and Vladimir Putin, who is probably more worried about successful democratic neighbors than NATO expansion, will be handed victory. On a plate.

Dr. Natalie Sabanadze is a Cyrus Vance visiting professor in International Relations at Mount Holyoke College. Prior to taking up this position last year, she was head of the Georgian mission to the European Union and ambassador plenipotentiary to the Kingdom of Belgium and Grand Duchy of Luxembourg since 2013.