COVID-19 as a Vector for Chinese Influence in Central Europe

COVID-19 as a Vector for Chinese Influence inCentral Europe

The outbreak of COVID-19 has starkly exposed most countries’ unpreparedness for combating a global pandemic. Geopolitical weaknesses, too, are laid bare, and China’s revisionist approach to handling the pandemic adds fuel to an increasingly volatile situation in Europe. Previously, trade routes, shipping lanes, and air corridors out of China were means for the virus to spread worldwide. Now, the virus has itself become a vector for China’s influence.

In recent years, skepticism over relations with China has been growing in Central and Eastern Europe. Countries taking part in the Chinese-led 17+1 framework—Albania, Bosnia and Herzegovina, Bulgaria, Croatia, the Czech Republic, Estonia, Greece, Hungary, Latvia, Lithuania, North Macedonia, Montenegro, Poland, Romania, Serbia, Slovakia, and Slovenia—have been dissatisfied with the results of Chinese investment. Promises have failed to materialize fully (or in some cases, at all), leaving countries with railways, bridges, and motorways to nowhere. Many deals are characterized by underperformance, stalled progress, or outright failure. Despite the media coverage, deals in the 17+1 countries have in fact been far smaller than China’s investment in the wider EU. Furthermore, allocation of funding is remarkably lopsided: 80% of Chinese investment in the 12 EU member states of the 17+1 grouping was concentrated in the Visegrád Four plus Romania. The remaining investments in the five non-EU countries were overwhelmingly allocated to Serbia.

Against that background, COVID-19 provides an excellent public relations opportunity to reboot China’s influence in Central Europe. With an EU-wide response delayed until very recently, despite exemplary crisis responses from parts of the V4, many in the region have started to look elsewhere for medical aid and expertise. Compounding a slow European response, earlier failures to chart a clear roadmap for EU membership in the Balkans and Eastern Partnership countries have only stoked frustration in the European Neighbourhood.

Furthermore, China’s provision of medical equipment, technology and expertise is perceived by several Neighbourhood states as far outstripping aid from Western donors. Serbian President Aleksandar Vučić’s claim on March 15 that “European solidarity does not exist” exemplified this frustration: “I have sent a special letter to the only ones who can help, and that is China,” signaling a serious tipping point in attitudes toward Beijing. More worryingly, the statement of Czech Interior Minister Jan Hamáček that China remained “the only country capable of supplying Europe [with sufficient medical supplies] indicates concerning susceptibility to Chinese influence from the region’s EU member states.

On the back of China’s well-publicized aid campaign comes an undercurrent of disinformation and misdirection in China’s European-facing media, targeting nations both within and without the 17+1. These information operations are multifaceted, with elements including brazen gaslighting attempts to frame the virus as a Western attack, portrayals of Chinese doctors as better qualified than those of the West, or simply of Chinese supremacy in combating the virus. Though the manifestations vary, the aim is constant: sowing division in Western countries and alliances, using medical aid as a vessel for its own propaganda, shifting international attention away from China’s failure to contain the virus’ outbreak and away from incidences of faulty medical equipment it has delivered to western European nations.

The regime in Beijing is clearly aware that COVID-19 offers enormous propaganda potential. Increasing economic stress will heighten the vulnerabilities.

Chinese over-reach and under-performance in recent years gave European and Atlanticist decision-makers a lucky break. But this opportunity was wasted. Now China’s decisive, well-publicized actions in recent weeks have shifted the paradigm. New difficulties in the region highlight the need for effective countermeasures, such as the Three Seas Initiative. This Western-led 12-country grouping is in effect a rival to the 17+1, and aims to increase connectivity in the region (member countries are Austria, Bulgaria, Estonia, Croatia, Lithuania, Latvia, Poland, Romania, Slovakia, Slovenia, the Czech Republic, and Hungary).  The postponement from June to October of the upcoming Three Seas summit in Tallinn gives the West some time; it must not be wasted.

Louis Cox-Brusseau is a political analyst and researcher currently based in Prague.

Photo: “Chinese flag with the stars” via Pixy under CC0 Public Domain. 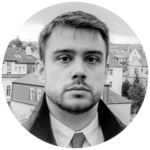