Disinformation and the ‘Evil Doctors’

It is tempting to focus on our own failings over disinformation, but we should never forget the aggressors’ role. 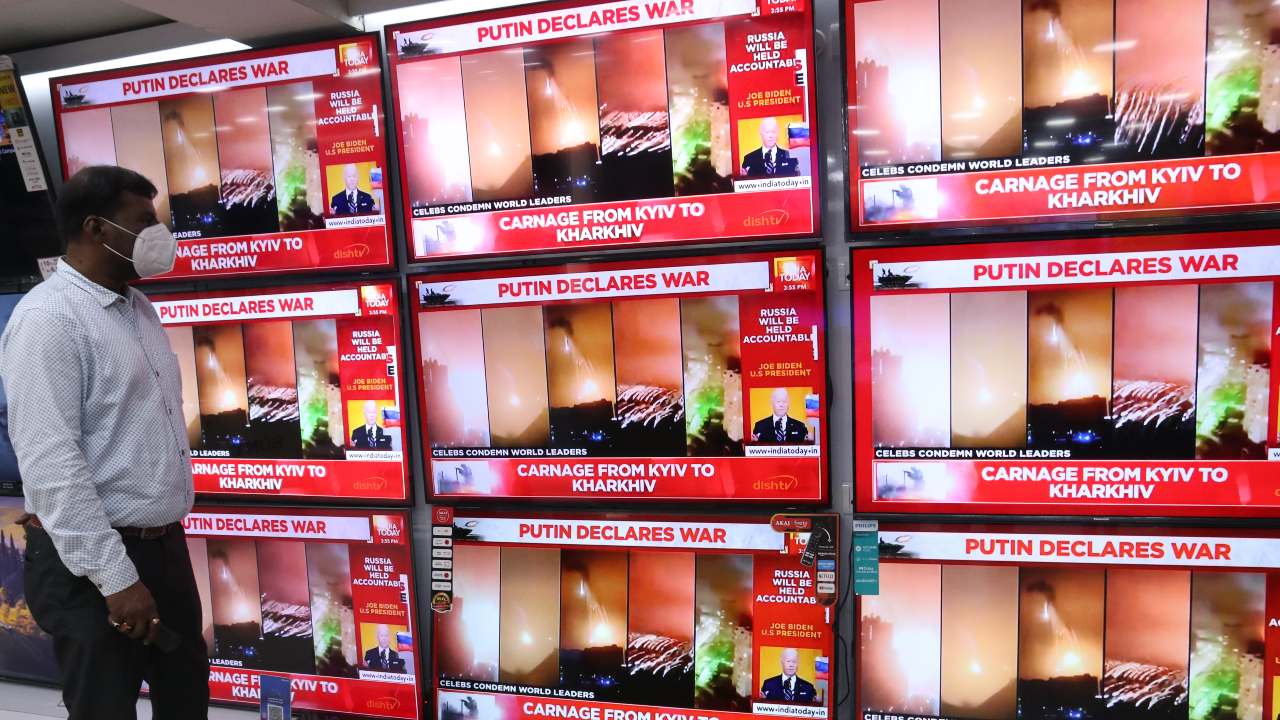 Photo: A man watches a coverage of the conflict between Russia and Ukraine displayed on televisions at a electronics item shop in Kolkata, India on February 25, 2022. Credit: Debajyoti Chakraborty/NurPhoto

It’s great news that former President Barack Obama has decided to start fighting disinformation. Practitioners in the field have been trying for years to make decision-makers and influencers pay more attention to the problem — having such a heavyweight joining this fight could make a big difference. Obama’s Stanford University speech on April 21 presented a deep understanding of the problem, including some very useful recommendations on how to tackle it.

Still, there was one point where it might be useful to suggest a modification. The former President said: “What does still nag at me though was my failure to fully appreciate at the time just how susceptible we had become to lies and conspiracy theories, despite having spent years being a target of disinformation myself. Putin didn’t do that. He didn’t have to. We did it to ourselves.”

I’m not sure it’s wholly fair to deny any credit to Russia’s Vladimir Putin. Of course, he did not create the multiple vulnerabilities in our information ecosystems; but he and his disinformation army have definitely done a great job in identifying weak points and exploiting them. And underestimating the damage they have done over the years might weaken our response to the problem of disinformation in general.

Ladislav Bittman once worked in the Czechoslovak communist secret police (StB) where he specialized in disinformation. He defected to the West in 1968 and revealed a lot about the Soviet-led disinformation effort. When describing the workings of the disinformation factory, he likened the approach to an evil doctor studying and analyzing his patient’s weaknesses and vulnerabilities – and then trying to make them worse, to “prolong his illness and speed him to an early grave instead of curing him.”

This is very similar to the pattern that we see in the information space nowadays, where disinformation weaponry is tailored to do damage according to local circumstances. In the US, the Kremlin’s campaign seeks to stoke racial divisions; this is not messaging that would be very successful in Central and Eastern European states, which are more racially homogenous. In these countries, it is more usual to encounter disinformation targeting refugees, or the LGBT community. Different audiences will receive different messages through different channels, but the “evil doctor” mechanism is everywhere the same. Disinformers are actively looking for and abusing the vulnerabilities they find. They do it systematically and they have been doing it for years.

The Kremlin renewed its export of disinformation in 2014, with the annexation of Crimea and Russia’s invasion of Eastern Ukraine. There have been significant disinformation campaigns before, like the Bronze Soldier incident in 2007 in Estonia; but the ongoing, daily export of disinformation messages through thousands of channels into dozens of languages, this “most amazing information warfare blitzkrieg” that has since evolved to an ongoing trench war, began in 2014 and has since targeted dozens of countries and many electoral processes.

It was only after 2014 that many Western countries started seeing the problem with disinformation or “fake news” (which became the word of the year in 2017.) Either we can claim that the efforts of the Kremlin had nothing to do with it and it is just a coincidence (or a result of some different, unrelated processes) that so many countries started having very similar problems at the same time; or we admit that Putin and his information army made at least some difference and had at least some impact.

The fact that someone has a vulnerability does not of course justify an aggressor targeting these vulnerabilities, and causing additional damage. There are certainly people more susceptible to using illegal drugs — but that does not excuse the dealers trying to turn an initial susceptibility into a full-scale addiction. Similarly, there are certain audiences more inclined to consume conspiracies — but that must not excuse the information aggressors who are trying to systematically supply them with this toxic substance and aggravate this initial inclination, and then abuse it for their own strategic, malicious goals.

There are even some weaknesses that we might want to protect. Some of these supposed vulnerabilities that disinformers target might be things we consider to be the biggest advantages of democratic countries. Pluralistic societies, the free exchange of opinions, and disagreement with each other can be strengths that autocratic forces seek to use, much like parasites seeking a host. Paradoxically, in these cases, the infected host can cure itself through the interrogatory power of free speech and free inquiry. Building a society without informational weaknesses is actually something that countries like Russia or China are trying to do through censorship and the outlawing of factual information. They seek a system where disagreement is impossible. But we surely do not want to go that way.

Yes, we need to work on our own weaknesses – but that will be much easier when we stop the aggressors in the first place. Just like renovating a house and repairing its leaky pipes is much easier if we first stop the arsonist that is trying to burn it down.

If we want to protect fact-based discussion and the free exchange of opinions, we have to defend our information spaces against information aggressors like Putin; not neglect their responsibility and blame their victims.

Jakub Kalenský is a senior analyst at the Hybrid CoE in Helsinki focusing on Russia and disinformation. He also worked in the Atlantic Council’s DFRLab and in the EU’s diplomatic service EEAS, where he founded the EUvsDisinfo campaign.