Bridging the Gap: Time for an EU-NATO Strategic Dialogue on Defense Tech

To stay secure, the transatlantic community must take on emerging and disruptive technologies together 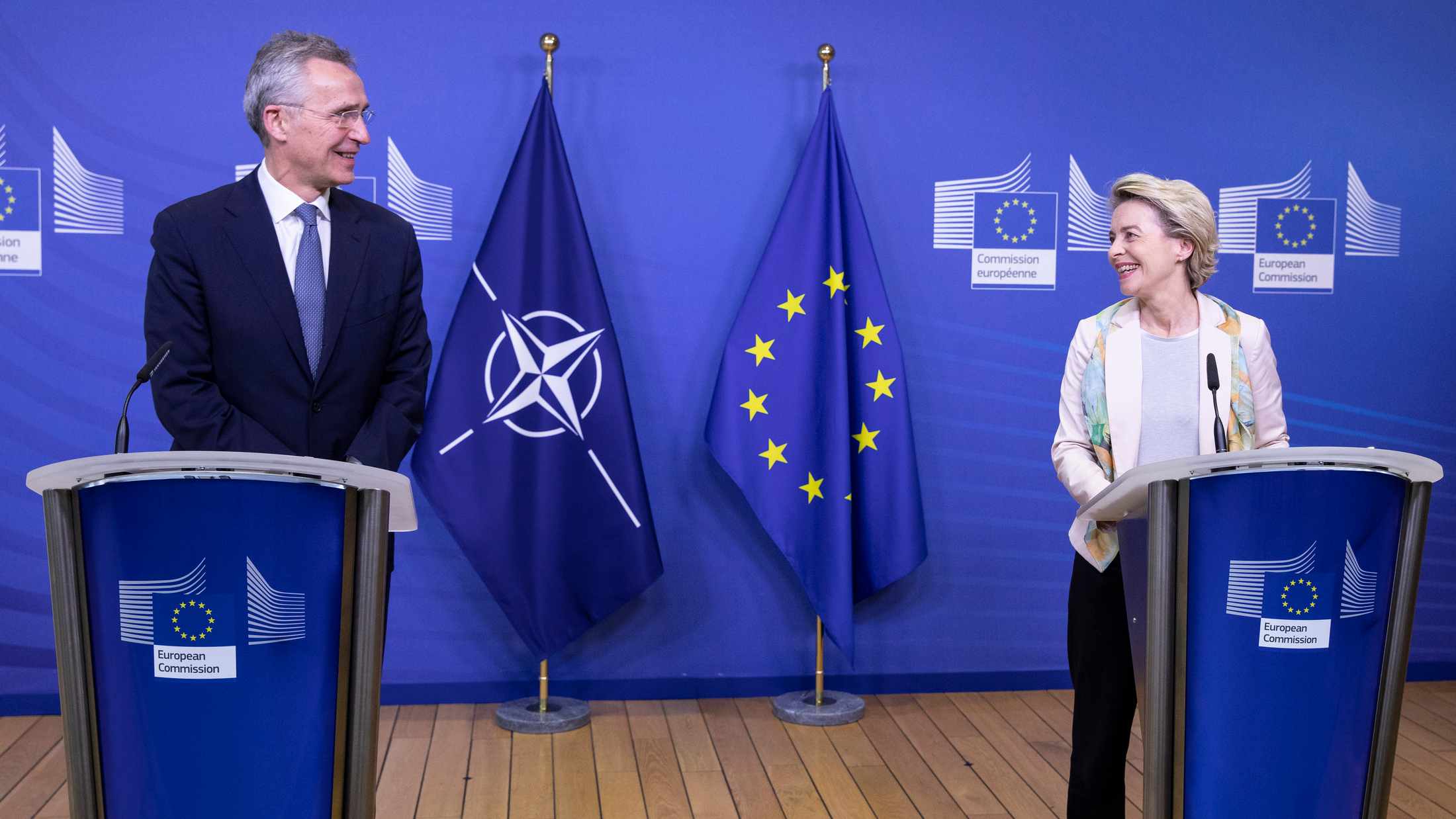 Joint press statements by NATO Secretary General Jens Stoltenberg and the President of EuropeanCommission, Ursula von der Leyen ahead of a meeting with the College of Commissioners. December 15, 2020. Credit: NATOWP

From Havel to Pavel: The New Czech President ChatGPT Chills – Will Its Hoaxes Divide Transatlantic Regulators? The European Union’s Evolving Military Capability How Western Tanks Will Make a Difference in Ukraine Wagner and the Serbs Mighty Baltics Lead the NATO Pack Germany to Crocodile: Eat Me Last
Explore

To stay secure, the transatlantic community must take on emerging and disruptive technologies together.

Today’s transatlantic security hinges on technology. On both sides of the Atlantic, our militaries, societies, economies, and information systems require increasingly advanced technologies to stay better, faster, and stronger than our adversaries and competitors. To retain their advantage and address vulnerabilities, the United States and Europe must work in lockstep to harness emerging and disruptive technologies for their collective defense. The key is to employ NATO and the European Union (EU) in unison for strategic effect.

NATO, the EU, and their member states have recognized the urgent need to combine their complementary capabilities to contest Russia and China, especially in the technological domain. Just yesterday, NATO Secretary General Stoltenberg announced a new a Defense Innovation Initiative “to promote interoperability and boost transatlantic cooperation on defense innovation” among allies – 21 of which are members of both NATO and the EU. NATO and the EU also share an overlapping set of forces, capabilities, talent, intellectual property, and budgets for defense investment and research and development (R&D). Under the 2016 Joint Declaration, practical NATO-EU cooperation has been humming along, despite lingering political obstacles. Applying emerging and disruptive technologies (EDT), such as artificial intelligence (AI), autonomous systems, space capabilities, hypersonics, quantum tech, and human augmentation, for defense has been a key focus area. This has been underscored by, for example, jointly supported workshops at the European Center of Excellence for Countering Hybrid Threats (Hybrid COE) and NATO-EU senior military staff talks. As each organization has made EDT advances, staff-level coordination and broad information sharing have helped to better align their efforts. For instance, NATO’s EDT roadmap team, Innovation Hub, and Science and Technology Organization have engaged with the European Defense Agency (EDA)’s tech work.

But staff-level coordination can only bear so much fruit in the absence of a more robust political effort. As strategic and technological competition with Russia and China has intensified, the stakes have risen too high to settle for incremental activities. Avoiding the political battles required to forge a more meaningful joint NATO-EU approach, nations have begun exploring other transatlantic forums to address EDT issues. The Canadian and French-led Global Partnership on AI, the U.S.-led AI Partnership for Defense, and the European Commission’s proposed Transatlantic Tech and Trade Council are a few examples. Each of these platforms is useful in its own right, specifically for AI issues, and could benefit from NATO and the EU joining to add their institutional weight. The risk with this approach, however, is the rapid fragmentation of transatlantic efforts on EDT. If this trend continues, the result could be a diffused smattering of multilateral frameworks, each focused on a particular tech issue with a different small group of countries.

By opting for outside platforms, the transatlantic community misses the point. The added value of NATO and the EU is their ability to coordinate efforts among large groups of like-minded nations. Both institutions have a great deal of experience and infrastructure for doing so. On a transformative set of issues that requires a comprehensive approach, such as the defense application of EDT, NATO, and the EU have the capacity to make an enormous collective impact. Instead of scattering across alternative forums, interested member nations must find ways to drive their EDT work through a new NATO-EU mechanism.

Launching an EU-NATO Strategic Dialogue on EDT could be an important option to explore. Routine, higher-level meetings in this format would draw together senior representatives from each institution, as well as member states and the private sector — each of which plays vital roles in assessing vulnerabilities and shaping requirements for EDT. The scope should expand beyond AI alone to encompass consultations on the wider security implications of EDT. Tentative agenda items could include forging key principles for tech governance around the military applications of EDT; addressing data-sharing issues; coordinating defense R&D and investment incentives; and establishing more robust standards and technical requirements for EDT-enabled systems to enhance interoperability. This could potentially have positive spillover in better aligning EDT aspects of the EU Capability Development Plan (CDP), the Coordinated Annual Review on Defense (CARD), and the respective NATO Defense Planning Process (NDPP). It would also create synergies for the EU to leverage its budgetary and legislative tools, which NATO lacks, to more effectively reinforce the Alliance. Lastly, it could strengthen the collective “annual review of vulnerabilities in alliance critical infrastructure and technologies, including those stemming from foreign ownership and influence”, as the NATO Secretary General has proposed.

The plethora of applications of emerging and disruptive technologies in the defense realm is something that both militaries and policymakers are dealing with on a daily basis. Developments are rapid but, at the same time, require long-term engagement and vision from senior leaders. In the end, EDT not only has implications for soldiers on the battlefield, but also for political decision-makers. In the near term, the covid crisis is occupying much of the bandwidth and institutional capacity across NATO and the EU, at the expense of accelerating the dialogue in support of defense innovation. But urgent action is needed to grow the transatlantic community’s fast-shrinking technological advantage in defense. It is paramount for leaders to diligently and intensively focus on this topic, as opposed to simply including it on the long list of issues for NATO or European Council meetings. Through a structured EU-NATO Strategic Dialogue on EDT, it could rightly become an integral part of the transatlantic meeting cycle, not least to create a common understanding around future defense implications. To this end, the NATO 2030 Reflection Group’s proposed NATO digital summit for governments and the private sector should be extended to EU stakeholders and ultimately feed into this strategic dialogue.

To stay secure, the transatlantic community must take on emerging and disruptive technologies together. It should be at the forefront of the joint action by the EU and NATO, reflecting the pressing need to act. This is of foundational importance for maintaining the Alliance’s strategic edge, addressing vulnerabilities of tech, and defending the norms and values it was built to protect. As the United States and Europe renew their collective agenda at the dawn of the new Biden administration, an EU-NATO Strategic Dialogue on Defense Tech should be at the top of their list.

Lauren Speranza is Director of the Transatlantic Defense and Security Program at the Center for European Policy Analysis.

Karlijn Jans is a defense expert currently serving as a policy advisor at the British Embassy in The Hague. Views expressed in this article are the author’s own and do not reflect those of HM Government.