Belarus: The Mother, the Banker, the Flutist, and the Diplomat

Eventually, dictatorships fail and new leaders emerge. The battle-scarred Belarusian democrats are likely to form part of a post-Lukashenka government. 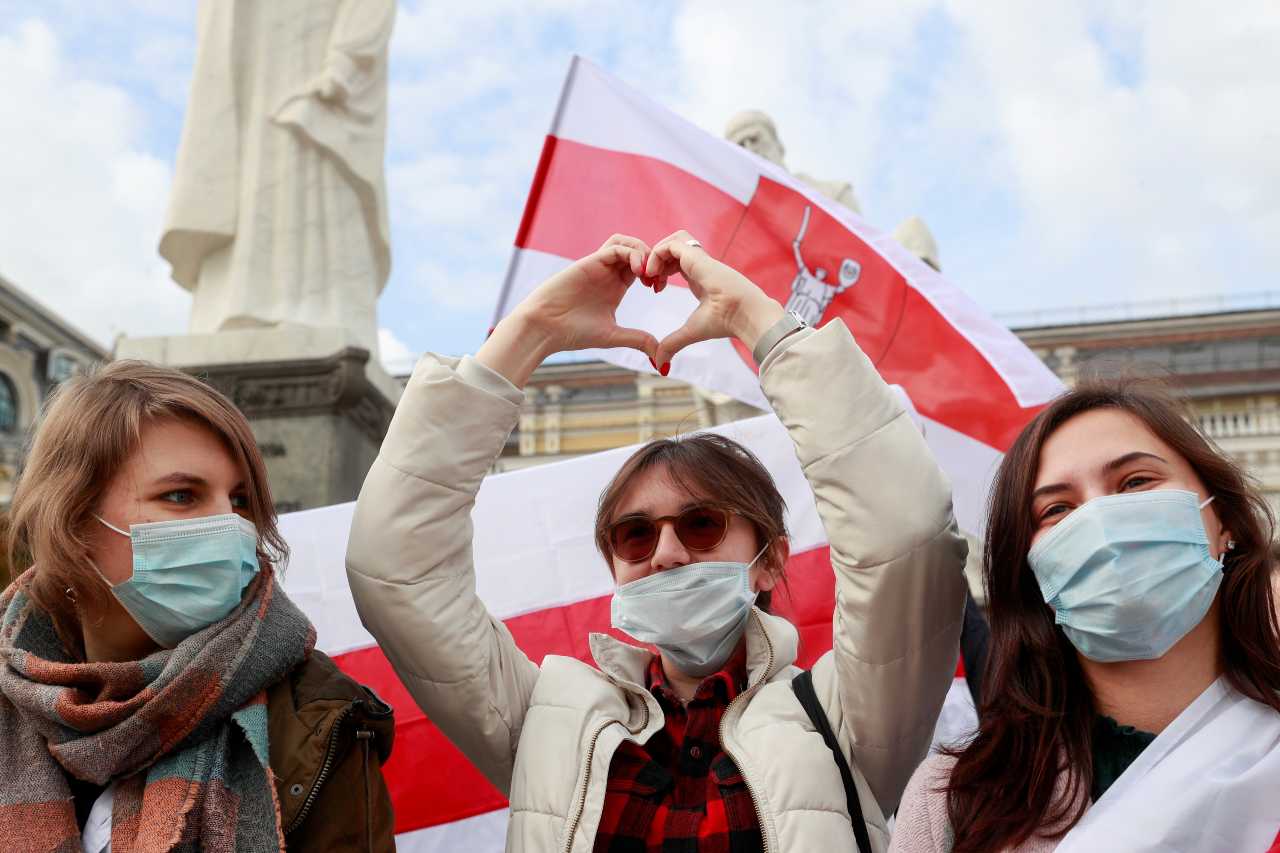 Photo: Demonstrators attend a rally in solidarity with Belarusian opposition supporters, who hold protests to reject the presidential election results and to demand the release of political prisoners in Belarus, in central Kyiv, Ukraine October 24, 2020. Credit: REUTERS/Valentyn Ogirenk

EU Tests Orbán’s Strongman Skills Light Flares in Ukraine’s Darkness Ukraine’s Refugees Mull Return After Russian Retreats The Compatriots: The Russian Exiles Who Fought Against the Kremlin How Europe Could Clean Up Its Cybersurveillance Mess My Grandma — an Ordinary Hero of Lithuania’s Resistance Midterm Alert: Silicon Valley is Losing the Fight Against Misinformation
Explore

Asked to imagine the face of Belarus’s opposition, most engaged observers would probably name Sviatlana Tsikhanouskaya, the 39-year-old leader of the democratic movement. From stay-at-home mother to president-elect (the title snatched from her as part of the 2020 stolen presidential elections) and then leader-in-exile, she provides an inspirational alternative to the country’s aging dictator Aliaksandr Lukashenka, 67.

But Tsikhanouskaya was not the only new figure to emerge from the huge and ultimately bloodily suppressed protest movement that emerged following the 2020 presidential election. The profiles of four more key leaders are below.

Probably the best-known is Viktar Babaryka, 58, ex-chairman of the Belgazprombank in Belarus, who remains the most popular presidential candidate — according to the latest poll, 33% of Belarusians think he would make a good president of Belarus. Jailed for 14 years on trumped-up charges of bribery and money laundering, he is currently resident in a high-security penal colony in northern Belarus, where he works as a stoker in a bakery.

Babaryka, 58, has a long history of dislike for dictatorships. During the Soviet era, he was first expelled from Komsomol and later from the Belarusian State University, where he had been studying at the Department of Mechanics and Mathematics. He was eventually reinstated at the university and graduated successfully.

In 1995, he began work at Belgazprombank, a Belarusian subsidiary of Russia’s gas behemoth Gazprom. In 2000, Babaryka was appointed the chairman of the bank’s executive board, the post he held for 20 years, up until the announcement of his plans to stand in the August 2020 presidential election.

Under Babaryka, Belgazprombank became one of the most successful private financial institutions in Belarus. In 2002, Lukashenka himself awarded him a presidential diploma for significant contributions to the development of the country’s banking sector. Babaryka was awarded the title the “best” and “top” CEO in the banking sector in 2016 and 2018 respectively.

As the chairman of a large Russian bank in Belarus, Babaryka was allowed to pursue an independent line in cultural and social affairs. On his initiative, the bank financed the printing of 15,000 copies of the five-volume edition of the Belarusian Nobel literature laureate Sviatlana Aleksiyevich, which were donated to libraries. He helped bring back to Belarus a copy of the Small Traveler’s Book, claimed to be the first book printed in the Grand Duchy of Lithuania in 1522 by the Belarusian scholar Francysk Skaryna, as well as paintings by world-famous artists with roots in Belarus, such as Marc Chagall, Chaïm Soutine, and Léon Bakst.

“It’s a shame when in the country where both Chagall and Soutine were born, there isn’t a single work of theirs . . . Therefore, when we had such an opportunity, we took it, ” said Babaryka, explaining why Belgazprombank had spent several million dollars on the paintings.

It was Babaryka’s conviction about the importance of charitable work and helping others that prompted him and his late wife to set up an international charitable foundation “Chance,” which finances the medical treatment of sick children. When he was arrested in June 2020, swathes of grateful messages flooded across social media from families whose children were cured thanks to the foundation.

A father of two, Babaryka had a happy family life. He spent the first significant sum of money that he earned on a dog for his wife and a Beatles record for himself. The family’s favorite book is J.R.R. Tolkien’s “The Lord of the Rings,” because “there’s some good in this world . . . and it’s worth fighting for” and because “even darkness must pass.” Babaryka often quotes these lines to his supporters when he writes from prison.

Photo: Belgazprombank ex-CEO and former Belarusian presidential contender Viktor Babariko (C) charged with taking a large-scale bribe and money laundering appears for a sentence hearing at the Supreme Court of Belarus. Babariko has been sentenced to 14 years in colony. Credit: Ramil Nasibulin/BelTA/TASS.

Although Babaryka had long been critical of the country’s political and economic course, perhaps it was the tragic death of his wife, who was killed in a diving accident in 2017, that persuaded him to more actively seek a different political future for his country.

Babaryka’s daughter Mariya, who lives with her family in Australia, recalls that during an annual family reunion in December 2019, her father sought her permission to stand in the presidential election, a decision that he had by then clearly taken: “I know what needs to be done [to make Belarus a better place]. And what am I going to tell my grandchildren? That I knew what to do, but was afraid?”

During the election campaign, he collected 435,000 signatures of support for his presidential bid, a record high for an independent candidate — even Lukashenka only managed 156,000 before the 1994 election. The authorities sensed the danger early, however, and arrested him just a month into the campaign, having accused him of financial crimes. Although under the Belarusian law only those already convicted by a court can be prevented from participating in elections — and Babaryka had the status of a suspect at the time — the Central Election Commission refused to register him.

In many ways a typical liberal European politician, Babaryka lauds tolerance and opposes discrimination. He is very popular with young people but is also respected by the older generations. Although considered by some a Kremlin stooge — because he worked for a Russian-owned bank — Babaryka has vehemently defended Belarus’ independence, its European heritage, and language.

Babaryka’s 31-year-old son, Eduard, who led the presidential campaign of his father, was arrested 17 months ago. For most of this time, he was kept in the KGB prison and still has not faced trial. He was reportedly approached by state agents to acknowledge his guilt and testify against his father in exchange for his freedom, but refused.

Flutist Mariya Kalesnikava, 39, is the daughter of two engineers, but her mother always admired classical music, while her father calls himself an “old rocker.” After graduating from the Academy of Music, Kalesnikava played in leading Belarusian orchestras, before moving to Germany in 2007 to study baroque flute. Soon after that, she decided to set up cultural projects to bring European modern arts to Belarus, and to enhance cultural ties between the two countries.

This venture introduced Kalesnikava to Babaryka (see above), who in 2017 was looking for someone to lead a new cultural hub, OK16, in the deserted workshops of the Minsk Machine-Tool Factory. Babaryka and Kalesnikava immediately hit it off and she became the arts director at the new venue.

When he decided to run for the presidency, Kalesnikava “agreed to support him instantly.” Like Babaryka himself, who turned to politics after a family tragedy (his wife had been killed in a diving accident in 2017), Kalesnikava says the death of a close family member (in this case, her mother) was a catalyst for political engagement. Events too played a part — following the arrest of Babaryka and his son Eduard, Kalesnikava became the leader of the campaign. She played the key role in consolidating the opposition behind the candidacy of Sviatlana Tsikhanouskaya, and together with Veranika Tsapkala, the wife and team leader of another presidential hopeful whom the authorities had barred from standing in the election, Valery Tsapkala, ran Tsikhanouskaya’s campaign. It was arguably the best-conducted presidential election campaign in Belarus.

Photo: Belarusian opposition activists Maxim Znak (L) and Maria Kolesnikova, who are members of the Presidium of the opposition’s Coordination Council, appear for a sentencing hearing at the Minsk Region Court. Credit: Ramil Nasibulin/BelTA/TASS.

When Tsikhanouskaya and Tsapkala were forced to flee Belarus, Kalesnikava became the face of civic resistance at home. She attended public protests across the country and went to factories, TV companies, and universities to tell people directly that she was proud of them. She says she learned from her time in Germany how important encouragement is for boosting self-confidence. She coined the iconic phrase that “Belarusians are fabulous” and is credited with an inspirational effect on hundreds of thousands of Belarusians in continuing the fight against a brutal and remorseless dictatorship.

One moment exemplifies Kalesnikava’s courage: when the authorities — recognizing her influence — tried to send her into exile, she tore up her passport at the Belarusian border and refused to leave. Sentenced to an 11-year term on fabricated charges of violating national security and conspiring to seize power, her letters from prison are nonetheless full of optimism and hope: “Building a civil society is a tedious process. It will take a long time – I have no illusions. It will be hard for all of us, but it is no longer possible to stop us,” she wrote.

Paval Latushka, a 48-year-old career diplomat, is the second-most popular independent candidate for president, according to independent public polls.

Latushka calls himself a child of the Belarusian national revival of the early 1990s. His father headed a district branch of the Belarusian Popular Front, the first democratic political party in Belarus. Formed in the late 1980s, it had its roots in the dissident movement. Latushka says he could not hold back tears when in 1991 Belarusian parliament adopted the white-red-white flag and the Horse-rider emblem as the country’s new official symbols. He has held onto the horse-rider plaque that once embellished the Belarusian Embassy in Poland, where the young Latushka was a diplomat. The symbol only lasted four years before it was replaced once more by Soviet-era emblems following a derided referendum widely seen as the first of Aliaksandr Lukashenka’s rigged ballots.

Latushka served as the Ambassador of Belarus to Poland, France, Spain, and Portugal. As the spokesperson of the Foreign Ministry, he introduced Belarusian in press briefings, and was later the only high-level diplomat who continuously used the language in all public communication. During his three-year term as Minister of Culture, he promoted cultural ties with European countries rather than Russia and its borderlands, unlike his predecessors. He tried to reform Belarus’ policy towards the preservation of historical buildings in order to highlight the country’s European architectural heritage.

Removed from the diplomatic service — which was popularly believed to relate to his ambition and independence from the government — he was appointed the Director of the National Drama Theatre, a post from which he was removed in August 2020 after he had supported the public protests against the rigged August presidential election.

To those who accused him of serving the Lukashenka government for 25 years, Latushka replies that he served the nation.

Katia Glod is a nonresident fellow with the Center for European Policy Research’s (CEPA’s) Russia program. Glod is an independent analyst and political risk consultant based in London and advises on the politics and economics of former Soviet countries.