After Russia’s War, a Stronger Ukraine and West Will Emerge

Putin’s war is producing the opposite of what he intended: a diminished Russia, a stronger Ukraine, and a reinvigorated West. 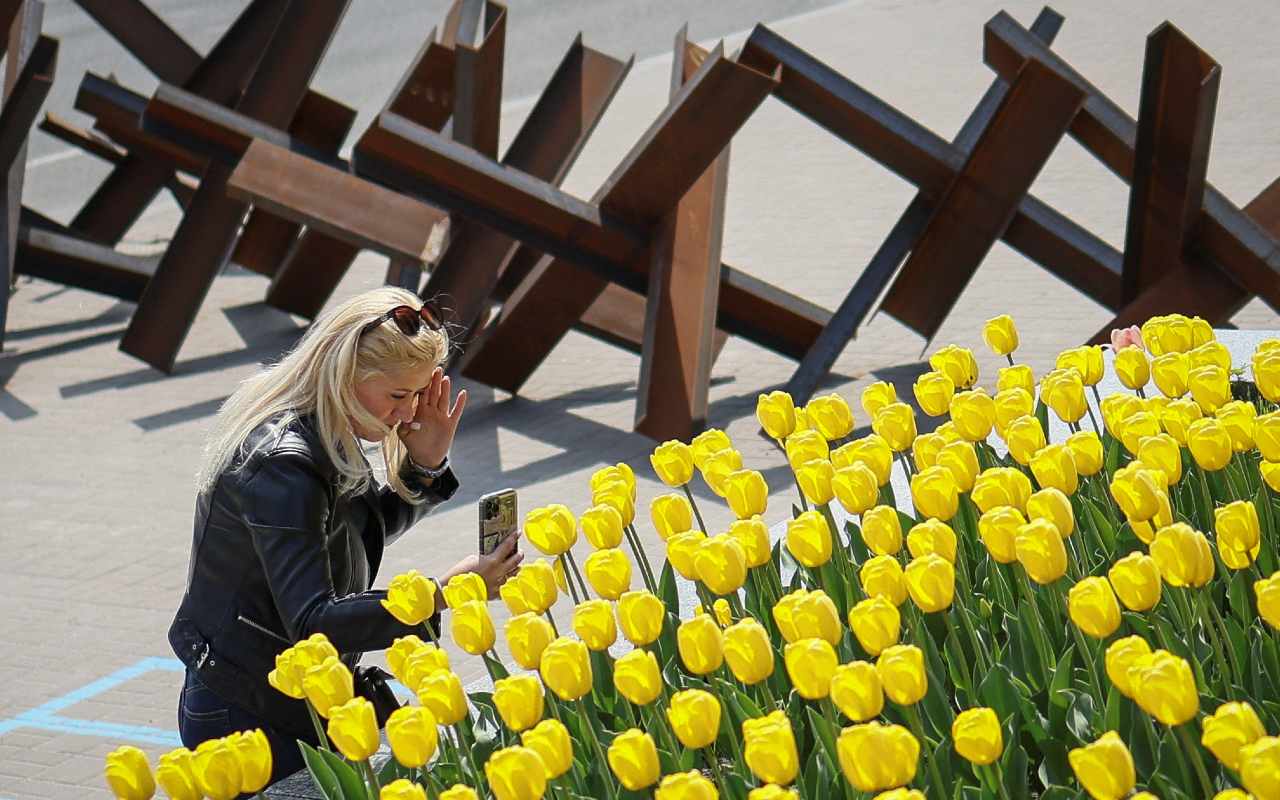 Photo: A woman takes a picture of the blooming tulips, near an anti-tank constructions, amid Russia's invasion of Ukraine, in central Kyiv, Ukraine May 2, 2022. Credit: REUTERS/Gleb Garanich.

Yet already, we can state with confidence that Ukraine will win — meaning survive as a sovereign, independent, and continually strengthening European state — and Russia will be forced to end its aggression. The Kremlin cannot destroy all of Ukraine and its people, and Ukrainians will continue to fight. Russian forces are bogged down in Eastern Ukraine, with no prospect of threatening Kyiv again. Nor can Vladimir Putin stand indefinitely against the combined pressure of a failing military operation in Ukraine and a failing economy at home brought about by massive sanctions and growing Russian isolation from the global economy.

Long, hard, and deadly days and weeks lie ahead as Ukraine absorbs and then reverses Russia’s ongoing attacks on its territory. The $20.4bn package of additional security assistance proposed by President Biden – and coordinated with allies directly by Secretary of Defense Austin – is desperately needed. It is far too soon to celebrate a Ukrainian victory as the difficult work still lies ahead.

With these basic orientational points in mind, one can begin to see the tectonic shifts that will take place as a result of Putin’s senseless war.

First, Russia will be a global pariah as long as Putin remains in power and/or Russian forces remain in Ukraine. Sanctions will not be lifted; Europe will indeed ban purchases of Russian oil and gas (though not fast enough); Western companies will keep leaving Russia and will not return; the country’s access to key technologies and certain key imports will dry up; it will not be accepted as an interlocutor in international gatherings; its military and civilian leaders will face charges of war crimes in international tribunals.

Russia’s lies and brutality in waging this unprovoked war have broken any willingness or trust among democratic states to do business with Russia. Its economy will contract by at least 10% this year, and possibly more in 2023 as its oil and gas revenue suffers. Russia will be a diminished and insular authoritarian state with few options.

Second, Ukraine will finally be seen as a legitimate and worthy European state. No longer will its aspirations be dismissed because it is “post-Soviet,” or suffering from “endemic corruption,” or “lack of reform.” Never again will anyone in Western Europe blame Ukraine and Russia equally for Russia’s prior invasions of Ukraine. The resilience and determination of the Ukrainian people, the valor of its soldiers, the ingenuity of its leaders, and the strength of its identity as a European democracy have led to a wholesale change in perceptions in Europe and America. Everyone now understands that Ukraine is one of us.

Third, and flowing from this, the European Union (EU), United States, and others will embark on a massive post-war reconstruction program for Ukraine. These funds will not just restore Ukraine to what it was before – they will build a better Ukraine. It will have better and westward-facing infrastructure, greater digitization, increased integration of its energy, agriculture, and logistics with the West, and legislation and regulations redesigned during the course of reconstruction to align Ukraine’s economy with that of the EU. It will, of course, take years – but not so many years as the 30 that have already passed since Ukraine regained its independence.

Fourth, the change in attitudes and real change in Ukraine’s economy will position Ukraine to join the EU. Already, the EU Council has asked the Commission for its advice on granting candidate status – advice that is likely to come back favorably in short order. West European states that had previously ruled out Ukraine’s EU membership are now talking about it as a real possibility. Europeans will quickly realize that a rebuilt Ukraine will be an asset for the EU rather than a liability. Ukraine will offer energy supplies (traditional and renewable), agriculture, mineral deposits, skilled labor, supportive industry, and more. It can help the EU achieve its own objectives in eliminating Russian oil and gas imports and increasing the proportion of renewable energy in Central and Eastern Europe’s energy mix, thus facilitating the attainment of the bloc’s own renewable energy goals.

Fifth, NATO has been rejuvenated by Russia’s aggression. Everyone now sees that war in Europe is indeed possible, and therefore preparations for defense can no longer be overlooked. Germany broke with tradition to help arm Ukraine and has pledged to increase defense spending by €100bn ($105bn.) Finland and Sweden – the latter breaking with 200 years of non-alignment – will now join the Western alliance. Arguments used in the past to block Ukraine from joining NATO — such as not provoking Russia — ring hollow as Russia has already twice attacked Ukraine unprovoked. In the wake of a diminished Russia and a strong, rebuilt, and militarily capable Ukraine, there is no longer any justification for forcing it (and Georgia and Moldova) to live in insecure grey zones.

Sixth, and finally, the long period of drift and distraction in US global leadership may be coming to an end.  As Winston Churchill is reputed to have said, one can always count on the United States to do the right thing, after it has exhausted all the other possibilities. In the current day, the Biden Administration was initially too slow and lacked vision in responding to Russia’s aggression; but in recent weeks, it has stepped up to offer much greater leadership in the transatlantic community. What’s more, major bipartisan majorities in both houses of Congress have been pushing the administration to do more, and to do it faster (like the new lend-lease act). This is unlikely to change any time soon, meaning the renewed bipartisan consensus on American leadership is poised to last well into the future.

President Putin launched this war with a view to eliminating an independent Ukraine, and rebuilding the Russian Empire. The result, however, will be a diminished Russia, a stronger and more fully European Ukraine, and a revived transatlantic community determined to face down future threats even after the current ones abate.

While all these trends are clear, they are not pre-ordained. Western leaders, and especially the US administration must clearly understand and continue to reinforce them. It is too early to claim victory, but the path to a better and safer West, with strengthened security and greater prosperity that also enfranchises Ukraine, is now plain to see.