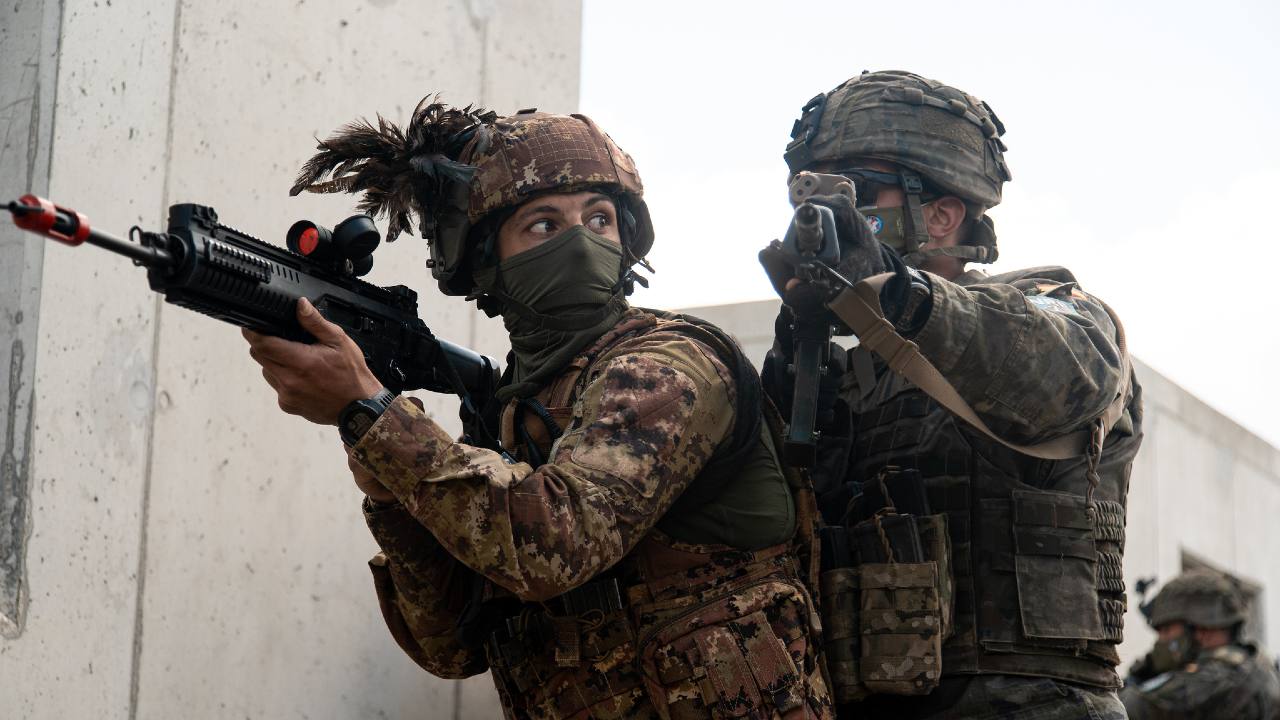 Photo: An Italian and Spanish soldier get ready for room-clearing drills during urban operations training as part of exercise Steadfast Defender 2021. Credit: NATO

On June 14, allied heads of state will convene for a symbolic summit in Brussels. It will mark their first meeting since the election of U.S. President Joe Biden and the start of the coronavirus pandemic. The occasion will also highlight the conclusions of the NATO 2030 Reflection Process, launched to revamp  the alliance’s strategy following drastic changes in the security environment and Donald Trump and Emmanuel Macron’s assertions that NATO was “obsolete” and “braindead.”

As the process draws to a close at the summit, many NATO-watchers expect allied leaders to formally task Secretary General Jens Stoltenberg with drafting the alliance’s next strategic concept — a guiding document for NATO’s core purpose and tasks. This presents a critical opportunity for the alliance to outline a bold and innovative vision for its future — one that incorporates new challenges, ideas, and people, especially young people.

Throughout the NATO 2030 activities, NATO made an important push to solicit input from the next generation of transatlantic leaders — Millennials (born between 1981 and 1996) and Gen Zs (born between 1997 and 2012) who will soon take the reins of the Alliance. Growing up in a vastly different era from that of NATO’s founders and Cold War guardians, these individuals have a much broader set of security priorities and a weaker connection to what is viewed as NATO’s traditional role.

To secure their buy-in and adapt for the challenges of tomorrow, NATO has begun broadening its agenda to include issues that matter to the next generation and will increasingly matter to all allied citizens in the future — from climate change and public health to disinformation and emerging technologies.

At the summit, three of these areas will be front and center, and next-gen Atlanticists should take note.

Tech and Innovation. Recognizing that technology underpins NATO’s collective defense and ability to compete with Russia and China, allied leaders are developing new ways to sharpen NATO’s technological edge. To prevent technological gaps between allies, NATO will discuss a potential defense innovation accelerator to facilitate more coordinated and efficient incorporation of emerging disruptive technologies (EDTs) into members’ militaries. The proposed accelerator, supported by dedicated innovation funding from participating member states, should help promote cooperation with the private sector. NATO is also expected to roll out an artificial intelligence strategy, offering ethical principles and standards, as well as a range of military use cases. As a result, there will be much for young tech gurus to watch for at the upcoming summit. If brought to fruition, these initiatives will open new opportunities for coders, engineers, data scientists, and Silicon Valley-watchers to engage with NATO.

Resilience. The past five years have revealed that allied countries are vulnerable to a range of shocks – from cyber-attacks to election interference to public health crises. The coronavirus pandemic exposed how adversaries and competitors can manipulate these events to undermine transatlantic security — for instance, by restricting medical equipment supply chains and propagating disinformation about the virus. As these nontraditional threats grow in intensity and scope, allied leaders will use the summit to emphasize the role of NATO, a military alliance, in defending against them — even when they fall below the conventional Article 5 collective defense threshold. Based on prior commitments, allied nations may look to strengthen their resilience pledge to make our societies, critical infrastructure, information flows and supply chains more resilient. Drawing on NATO’s Article 3 mandate, this could involve raising security requirements for ports, energy pipelines, undersea cables, telecommunications, and cyber networks across allied nations. These efforts could produce additional avenues to engage rising leaders working on non-military threats in social media companies, civil society organizations, medicine, cyber and IT firms, and other strategic industries that can help build resilience through a whole-of-society approach.

Climate Security. Despite some concerns of mission creep, Secretary General Stoltenberg has made a compelling case for NATO to engage on the security implications of climate change. Climate change not only increases competition for scarce resources and fuels tensions within the Euro-Atlantic area. It also affects NATO activities on land, air, and sea — from flooding ports in Norfolk to melting ice in the Arctic. In March of this year, NATO foreign ministers approved a climate security agenda, outlining NATO’s role in understanding the challenge, adapting operations and reducing military emissions. As previewed by Stoltenberg, allied leaders plan to approve a more specific climate action plan, which could emerge at the summit, creating space for a new cohort of young activists and scientists who might not traditionally play a role in supporting NATO’s mission.

While the summit will cover many issues du jour — including Russia, China, defense posture, and spending — it is significant that it also features important initiatives in the emerging areas of tech, resilience, and climate. It proves that NATO is adaptable and dedicated to serving the interests of its people, including young people. As NATO commissions its next strategy, the leaders of an emerging generation should see this as a call to action. They should look to contribute to these debates in NATO circles and shepherd them within their own communities. It is time to embrace an agenda for NATO’s next generation built with the next generation.