This report is a part of #CCPinCEE, a series of reports published by the Center for European Policy Analysis (CEPA) analyzing Chinese influence efforts and operations across the nations of Central and Eastern Europe. Goals and objectives of CCP malign influence Bulgaria has never been among Beijing’s foreign policy priorities, and the feeling has been […] 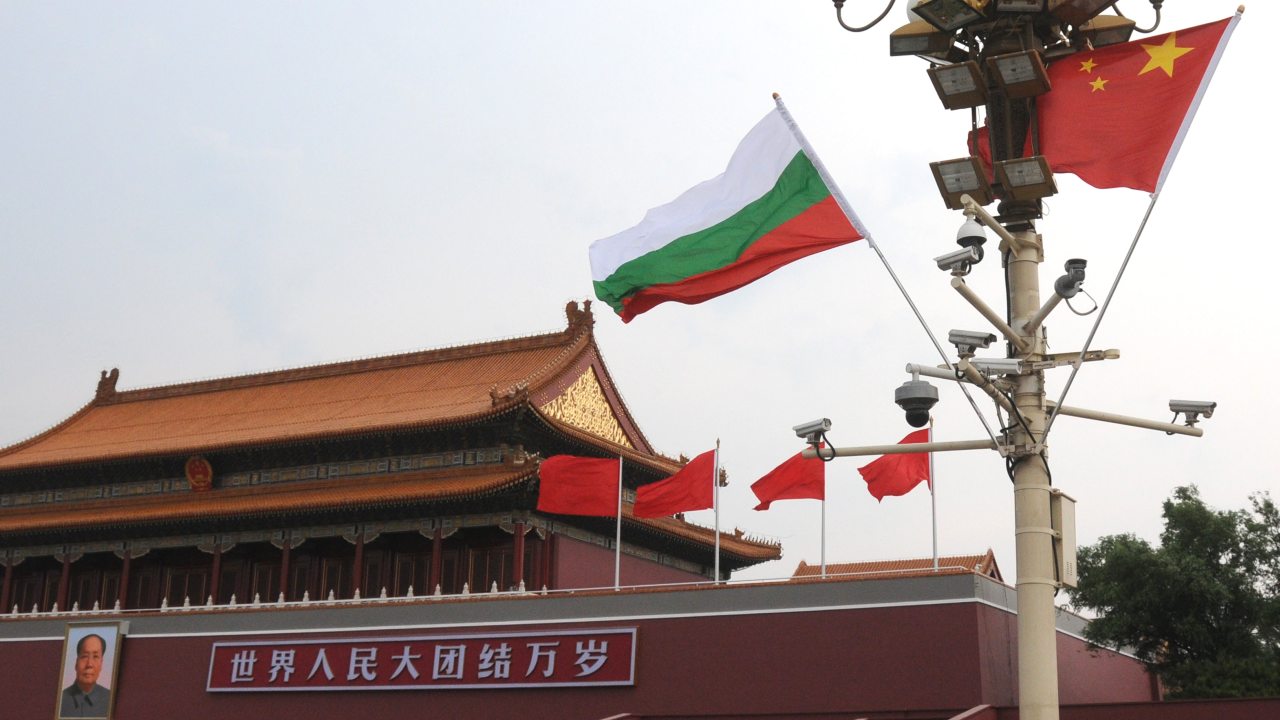 Photo: National flags of China and Bulgaria flutter on a lamppost in front of the Tian'anmen Rostrum during the visit of Bulgarian president Rumen Radev to China in Beijing, China, 2 July 2019. At the invitation of President Xi Jinping, President Rumen Radev (Radev) of Bulgaria is paying a state visit to China from July 1 to 5, during which he attended the 13th Summer Davos. The traditional friendship between the two countries has continued to grow. At present, the two sides have maintained close cooperation at all levels, achieving notable results in cooperation in areas such as economy, trade, agriculture, and deepened people-to-people and cultural exchanges, setting a good example for country-to-country relations. Credit: Credit: Oriental Image via Reuters Connect

Bulgaria has never been among Beijing’s foreign policy priorities, and the feeling has been mutual. 1 At the same time, China loops Bulgaria in with the European Union’s ambivalent support for US policy toward China. 2 China’s objective is to build an influential pro-Beijing lobby and prevent Bulgaria from joining the group of China’s outspoken critics. 3

So far, Chinese efforts in Bulgaria have produced mixed results. Officially, their relations hit a high point in 2018, when Prime Minister Boyko Borissov hosted the 16/17+1 meeting in Sofia during Bulgaria’s EU Council presidency. The next year, at a meeting of Bulgarian President Rumen Radev and his Chinese counterpart, Xi Jinping, the two men agreed on closer ties via a “strategic partnership” between their countries. 4 Recently, however, bilateral relations seem to be at a standstill. A couple of signs of Bulgaria’s declining interest were the relatively lower-level Bulgarian delegation that attended the virtual summit of the 16/17+1 initiative of economic cooperation, 5 and the lack of government officials at Sofia’s public commemoration of the 100th anniversary of the Chinese Communist Party in October 2021. The justice minister of the then-caretaker government sent a congratulatory statement to the event, which was organized by professor Zahari Zahariev, chairman of the national One Belt, One Road Association. 6

This cooling of relations coincides with disillusionment about Chinese investments in the country. Bulgaria received only 1% ($112 m) of Chinese financial flows into Central Eastern Europe from 2000 to 2020, putting it ahead of only Croatia. 7

Media and social media: The Chinese government spreads propaganda through social media and some Bulgarian-language online and print outlets that it owns or finances. For example, China Today (Китай днес) is a weekly newspaper covering Chinese domestic and foreign policy and bilateral relations, published by the same team that produces the Bulgarian edition of Russia Today (Русия днес). 8  Other popular media websites include the Bulgarian-language China Radio International website and We Are China Facebook page.

Leaders’ meetings in the framework of the 16/17+1 initiative for economic cooperation: The 16/17+1 summit in Sofia in 2018 concluded with memoranda for $1.75 bn in loans from the China Development Bank to small and medium-sized companies in Bulgaria, and investments in infrastructure projects. 9

The Cooperation between China and Central and Eastern European Countries (C-CEEC) Global Partnership Center in Sofia: Announced during the seventh C-CEEC leaders’ meeting in 2019, the center was to be situated within the Bulgarian Council of Ministers. It would offer consultation and advice to government agencies and businesses involved in the 16/17+1 economic initiative and “promote(s) the C-CEEC mechanism’s principles of openness, equality, fairness, and transparency.” 10 There is no evidence of its actual functioning yet, perhaps due to the pandemic and a protracted political crisis in Bulgaria after March 2021.

Development of a Bulgarian-Chinese Innovation Center in Sofia: Sofia University has volunteered to host the center, which was agreed by the two countries’ leaders in 2018 and which would focus on information technologies and health sciences. 11

Exchange visits/bilateral meetings: For example, the Chinese Association for International Understanding (CAFIU), a Beijing-based institution of the Chinese Communist Party, 13 has hosted several tours of China for Bulgarian leaders in fields such as academia, journalism, and business. It also regularly invites Bulgarian representatives to its international events and co-chairs similar Bulgarian-Chinese fora in Sofia.

Academic facilities: One of the main tools for reaching young people is the Confucius Institute in Sofia, the first on the Balkan peninsula and one of the first in Eastern Europe. 14 Launched in 2006, it was designated a model for the development of Confucius Institutes worldwide in 2013. 15 Other centers exist in universities across the country. 16

Content-sharing agreements with local electronic and print media: 24 Chasa, one of the most widely distributed daily newspapers, regularly reproduces pieces from China Radio International. In addition, Bulgarian National Television has an agreement with China Central Television to air Chinese content on BNT 2 and its other channels, and the private TV-7 airs Chinese content.

Agreements with professional organizations: Most notably, the Union of Bulgarian Journalists and the Chinese Union of Journalists agreed in November 2020 to launch a journalistic forum on solidarity and cooperation. 17

Business lobbies and associations: For example, the Plovdiv-based Bulgarian-Chinese Business Development Association seeks to promote Bulgarian agricultural produce in China. In addition, a Bulgarian-Chinese Chamber of Commerce is active nationally.

Given the fairly limited (albeit growing) direct economic footprint of China in Bulgaria, and in particular the lack of flagship projects by Chinese state-owned companies, the impact of Chinese soft and sharp power should not be overestimated.

Chinese propaganda in Bulgaria is reminiscent of the rigid Cold War stylistics and content, yet one should not underestimate its efficiency and long-term impact. China’s main focus is on issues that are generally neglected since the Cold War but are particularly relevant in Bulgaria, the poorest country in the EU. Keywords and phrases such as “peaceful coexistence,” “poverty,” “equality,” “national sovereignty,” “non-interference,” and “social justice,” appear frequently in Chinese propaganda. They do not impress the local elites but they touch on the anxieties and priorities of ordinary Bulgarians, which could help explain why a 2020 Pew Research Center poll found that 55% of Bulgarians have a favorable view of China, a higher percentage than the other surveyed CEE and Western European countries. 18

Those most vulnerable to Chinese propaganda tend to embrace euroskepticism and anti-NATO/anti-US sentiment. These are mostly either Russophiles or Bulgarian nationalists who support the Bulgarian Socialist Party or the “patriotic fringe” parties. As Chinese influence grows internationally, however, many politicians from other mainstream parties have flirted with joining the pro-China lobby. The parliamentary Bulgaria-China friendship group is one of the most popular in the legislature. 19 And compared with other CEE parliamentary groups, Bulgarian members of the European Parliament are less critical of authoritarian regimes, including China’s. 20 For example, only 10 of Bulgaria’s 17 MEPs voted for a European Parliament resolution condemning human rights violations against the Uyghurs in China, and only 11 condemned China’s crackdown on pro-democracy activists in Hong Kong. 21 On the basis of these resolutions and others, the Political Capital think tank’s China-critical index puts MEPs from the Bulgarian Socialist Party among the most China-friendly mainstream parties in the European Parliament. The party’s votes are often out of step even with the Socialist and Democrats Group’s policy preferences. 22

Photo: Prime Minister Boyko Borissov and the People’s Republic of China’s State Council of China Li Keqiang at the opening of the 2018 16+1 Summit in Sofia, Bulgaria. Credit: Council of Ministers of the Republic of Bulgaria.

The trajectory in Bulgarian-Chinese relations mirrors the general shift in US/EU relations with Beijing. The Bulgarian government was initially a vocal supporter of some announced initiatives to benefit from investments under the One Belt, One Road initiative, since renamed the Belt and Road Initiative. But outside of some private-sector efforts, not much has materialized. In the absence of any substantial initiative as the 16/17+1 format peters out, old-style Chinese propaganda is unlikely to sway many Bulgarians. Yet, the general attitude toward China in Bulgaria remains positive, and the pro-Beijing lobby in the country remains strong, though with limited access to the mainstream political and cultural spectrum. The war in Ukraine has exacerbated Bulgaria’s political instability, with the country’s political elite divided over an approach to Russia. This leaves opportunities for China to try to win over the parts of Bulgarian society repulsed by the Kremlin’s brutal attack on Ukraine. Yet, however economically tempting, Chinese overtures to Bulgaria are likely to be met by a mainstream clearly focused on realizing Bulgaria’s EU-financed projects first.