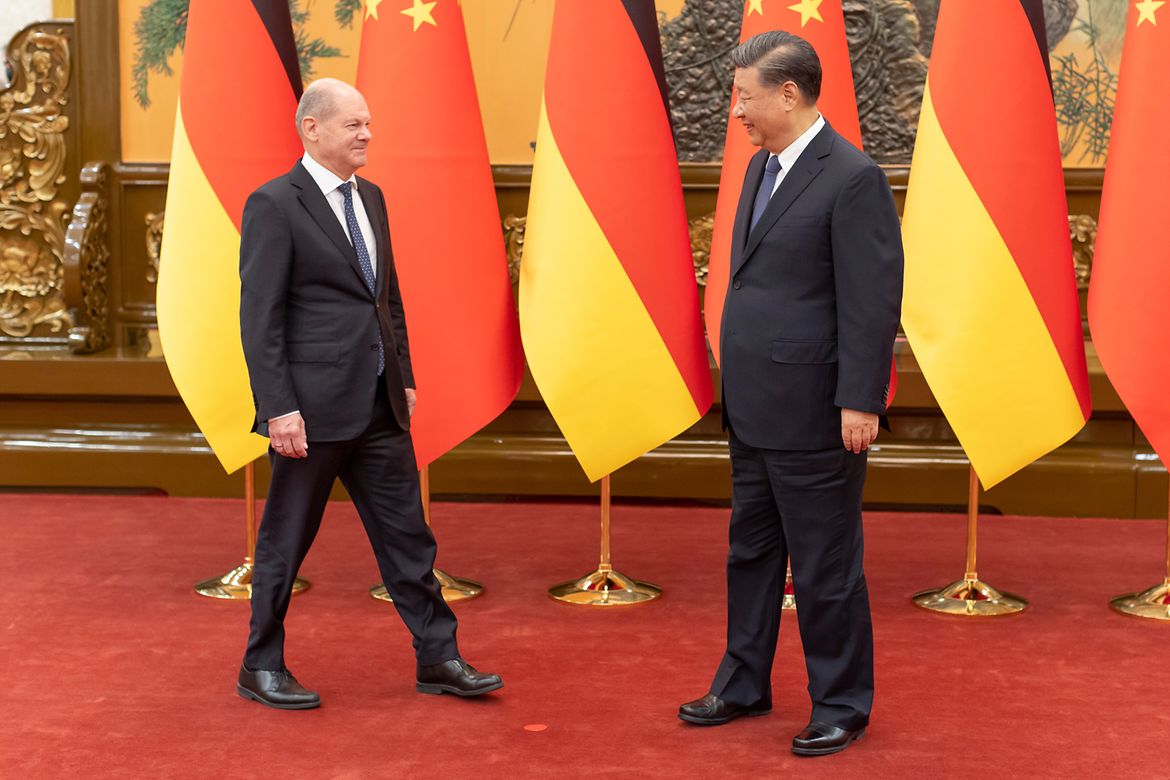 Just 72 hours after Russian President Vladimir Putin unleashed his all-out war of aggression against the Ukrainian people, German Chancellor Olaf Scholz addressed the Bundestag with what was widely billed as a watershed in his country’s foreign and security policy.

The February 27 speech set lofty expectations, delivered less than three months after Scholz assumed the helm of Europe’s largest economy following the 16-year chancellorship of Angela Merkel. The widely welcomed speech seemed to presage not just a swift change in German defense, energy, and diplomatic policy toward the Russian Federation, but a sea change — a Zeitenwende, in Scholz’s words — that might shatter the country’s foreign policy dogma of decades.

Eight months later and hopes that Germany’s long-established policy frameworks — like Wandel durch Handel, or change through trade — have finally been buried in the graveyard of failed geopolitical strategy may be in doubt. Recent actions by Scholz — as well as revelations from the country’s industrial sector — are dampening the more optimistic expectations of the Zeitenwende, and provoking fears of a reanimation of repudiated realpolitik.

Indeed, a zombie Ostpolitik seemed visible in the shadows behind Scholz’s controversial visit to Beijing this month, just days after the Chinese Communist Party’s 20th National Congress set the stage for President Xi Jinping to solidify his grip on power for an unprecedented third term. In light of the moment, it was notable that Scholz was joined not by other European heads of state or EU officials in a show of democratic solidarity, but instead by roughly a dozen business leaders from firms like Deutsche Bank, Siemens, and BASF.

If this seems an overly skeptical take on events, remember that we’ve been here before. As I’ve argued before, Germany’s friendly relations with Russia stretch back through former Chancellor Angela Merkel’s tenure, through former Chancellor Schröder’s time in office during the early 2000s, ostensibly tracing its roots as far back as Willy Brandt’s 1970s Cold War era concept of Ostpolitik. With Putin, we now know there was no change through trade. And no democratic Wandel ever emerged from Putin’s Kremlin, though there were many, many years of Handel delegations to Moscow, and deals that greatly increased Germany’s dependence on Russian energy and critical infrastructure, such as the Nord Stream pipelines.

It’s easy to forget the widely criticized 2015 visit of then-Vice Chancellor Sigmar Gabriel just over a year after Russia’s illegal annexation of Crimea and the initial invasion of Eastern Ukraine. After the visit, Gabriel was quoted by the Kremlin as not only offering firm support for Gazprom’s Nord Stream 2 pipeline, but also signaling to Putin that Berlin would work to keep the project under German control so that “opportunities for external meddling will be limited” (read: attempting to keep the project outside EU measures designed to support the continent’s energy security.)

After Russia’s full-scale invasion of Ukraine, and Scholz’s Zeitenwende declaration, this format of German leaders flying to an autocratic nation for a bilateral state visit with infrastructure deals high on the agenda might have seemed off limits.

Yet, even with increasing concerns about Xi’s growing authoritarianism, and with Russia’s energy weaponization against Germany both visible and damaging, and demonstrably rebutting years of change through trade orthodoxy, the run-up to Scholz’s Beijing trip had a familiar format.

The weeks ahead of the Scholz visit saw the culmination of a long-brewing deal to sell part of the Port of Hamburg to the Chinese state-owned shipping enterprise Cosco. According to reports, the firm is closely tied to both the Chinese Communist Party and the People’s Liberation Army under the country’s program of “civil-military fusion,” and has raised intelligence concerns given a 2017 Chinese National Intelligence Law, which the Financial Times describes as bringing “Chinese companies further into Beijing’s strategic fold, [allowing] the state intelligence apparatus to demand that companies assist in intelligence collection.” And since the beginning of Russia’s February invasion of Ukraine, Cosco has continued to use its tanker fleet to transport Russian crude oil, as other shippers refused to trade Russian hydrocarbons.

With this in mind, the proposed deal reportedly drew the ire of both the EU as well as the US, which said Cosco should not be allowed to take a controlling stake.

The objections thus mirrored longstanding concerns about Germany’s infrastructure dependence on hostile authoritarian states, concerns that have been expressed over the years by the country’s friends and allies across both sides of the Atlantic.

This time, however, the deal also generated widespread opposition across the German political spectrum itself, with reports that six German ministries in Scholz’s own government strongly opposed the deal. This included not only the German Economy and Foreign ministries (led by the more hawkish Greens, Robert Habeck and Analena Baerbock), and the Finance and Transport ministries — led by Scholz’s FDP coalition partners — but also the heads of the German Defense and Interior ministries from Scholz’ own SPD. Bruno Kahl, the head of Germany’s BND foreign intelligence agency meanwhile testified at a Bundestag hearing in October that he and his agency “are very, very critical about the participation of China in critical infrastructure.”

Faced with a wall of criticism, on 26 October Scholz’s Chancellery offered a compromise whereby it would take a 24.9% stake, rather than the 35% originally planned in Container Terminal Tollerort, in the Port of Hamburg. This was described as a means of limiting Cosco’s involvement “in management or strategic decisions”, but was again sharply criticized. Katharina Dröge, co-leader of the Green Party’s parliamentary bloc, said the imagined compromise still damaged Germany’s  sovereignty in critical infrastructure, and added: “Those who imagine this investment as a purely economic project have learned nothing of the Russia policy of recent decades.” Just as with Nord Stream before it, the Cosco agreement is not just a commercial deal.

Even as the dust was settling, the economic daily Handelsblatt reported progress toward another controversial Chinese investment proposal. On 27 October, reports emerged that the German government was poised to approve the takeover of Dortmund-based chipmaker Elmos Semiconductor SE by a wholly owned Swedish subsidiary of China’s SAI Microelectronics. Reports suggested the government was sanguine about the deal, arguing the Elmos semiconductor technology was the same as that already available in China. This contradicted the assessment of the BfV federal domestic intelligence agency, which warned that Chinese ownership in German chip production capacitywas the concern. The point was conveyed in a sharp tweet from German CDU politician Jens Spahn, who stated: “We support semiconductor production in Germany with billions of euros with the aim of becoming more independent of China . . . and then sell semiconductor production to…China.”

With the Cosco deal in hand and the SAI deal churning, Chancellor Scholz published an article on the eve of the China visit. He defended the trip by pointing to his refusal to “decouple” from China, while attempting to manage strategic dependence — invoking the Cosco compromise as a risk reduction measure implemented by his government.

While Scholz did follow through with his vow to raise a range of human rights and international security issues during his visit, the focus remained largely economic, symbolized by the announcement of deals beyond the Cosco approval – including a re-announcement of the sale of 140 Airbus jets to China. More emblematic of the economic focus? The large German business delegation that flanked the Chancellor during the visit.

This included Martin Brudermüller, CEO of BASF, who publicly called for an end to “China bashing” in the lead up to the visit, and whose company is the majority shareholder of Wintershall DEA, one of the five so-called “Western Investment Partners” of the Kremlin’s sanctioned, and now-damaged Nord Stream 2 pipeline project. Notably, on the same day Brudermüller joined Scholz in Beijing — November 4 — a Spiegel/ZDF investigation revealed that a Wintershall joint venture with a subsidiary of Kremlin-controlled Gazprom provides gas condensate to the Russian parent; this is used to produce jet fuel for the Russian air force, currently mounting air strikes on Ukraine.

This is no different to visits by Merkel and Schröder to Vladimir Putin over the years. And as such, there is a very real risk here for Germany’s self-declared change of course.

If Chancellor Scholz merely hopes to pursue business as usual with a key trading state (and it is important; China was Germany’s second-biggest export market after the US last year), then perhaps Berlin still hasn’t moved on from its Neue Ostpolitik foreign policy to the promise of the Zeitenwende.

He knows the problems with that approach. Not only do many in government oppose such a policy, it is outright unpopular with the German public, who (as with Ukraine) seem to have a very good grasp of changing world trends and where the country’s interests lie. A November poll found just 9% of Germans considered China trustworthy, 1% fewer than those who said the same about Russia. Some 63% said it posed a global threat (compared with 86% for Russia.)

It may be that the resounding criticisms of the trip, and of deals cementing in strategic reliance on authoritarian nations, will be sufficient, and perhaps Scholz’s coalition will ultimately deliver a real Zeitenwende fully evolved away from past illusions of Ostpolitik.

Other democracies, led by the US, should continue to encourage this in diplomatic engagement, given Germany’s essential role as Europe’s leading economy. There is hope; just days after the visit, the German government ultimately reversed course on one China decision, blocking the takeover of Elmos by China’s SAI Microelectronics, citing national security concerns.

So at least for this moment, we can hope the scoreboard might read: Zeitenwende 1. Zombie Ostpolitik 0. But the game’s not over yet.

Dr. Benjamin L. Schmitt is a Research Associate at Harvard University, a Senior Fellow for Democratic Resilience at CEPA, a Fellow of the Duke University Center for International and Global Studies “Rethinking Diplomacy” Program, and a Term Member of the Council on Foreign Relations. (Twitter: @BLSchmitt)