Why Shouldn’t Ukraine Strike Back?

Russia gives itself the right to invade sovereign neighbors, while denying their legally established right to retaliate. 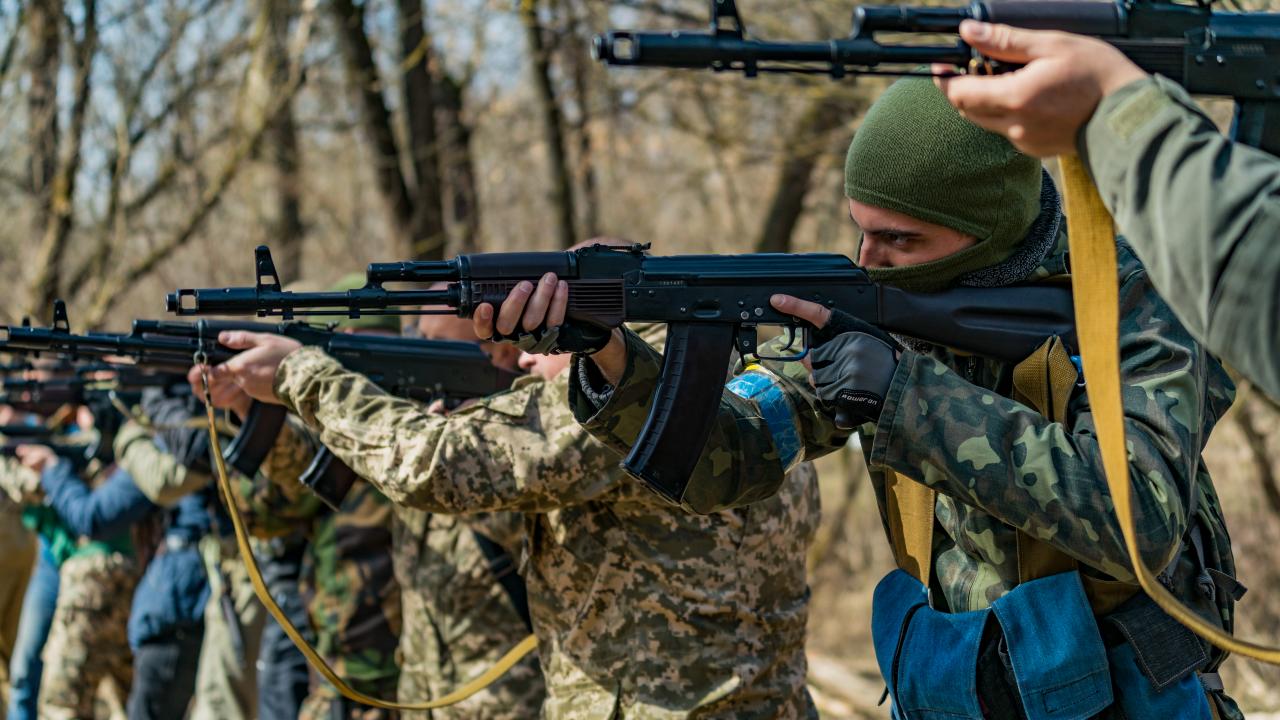 Photo: Civilian volunteers learn how to use their rifles during a military training in a camp of Zaporizhzhia, Ukraine. With the Russian army just a few kilometers of the city, many civilians are getting military skills for the future combats in the Russia´s war in Ukraine. Credit: Celestino Arce/NurPhoto

The base basics: Russia has launched a brutal war on Ukraine in violation of its pledge in 1928 (the Litvinov Protocol) and 1945 (the United Nations Charter) never to fight except in self-defense.

Pursuing its “special military operation”, this war also violates international laws on the required treatment of civilians and prisoners of war. Russia bombs nurseries, schools, and hospitals as well as apartment buildings. It starves, tortures, mutilates, and kills prisoners of war (PoWs.) A Russian diplomat calls for some PoWs to be executed by hanging, Individual Russian soldiers steal what they can from private homes while the larger Russian machine has purloined grain that could feed hungry nations or Ukrainians.

Meanwhile, Ukrainians try to drive back the invaders. Their own pluck is now bolstered by the US and other Western weaponry with a longer range and greater accuracy than Russia’s armaments. Russia complains about this foreign assistance even as it craves military and economic help from China, Belarus, Kazakhstan, Chechnya, Iran, and Syria.

Mindful that no NATO country wants the Ukrainian war to spread, Ukraine has agreed not to use US supplied weapons to strike targets in Russia. The effect is uneven. Russians do whatever they wish inside of Ukraine, but Ukrainians may do nothing inside Russia, Innocents are murdered while war criminals go unpunished.

Could Ukraine receive UN authorization to strike back? On March 2, the UN General Assembly voted overwhelmingly for a resolution deploring Russia’s invasion of Ukraine and called for the immediate withdrawal of its forces, in a global expression of outrage that highlighted Russia’s increasing isolation. In an emergency session of the UN’s General Assembly, 141 of the 193 member states voted for the resolution, 35 abstained, and five voted against.

The only countries to vote no in support of Moscow were Belarus, North Korea, Eritrea, and Syria. Longstanding allies Cuba and Nicaragua joined China in abstaining. On February 25, the day after the war began, Russia was the sole vote against a similar resolution in the Security Council, where the Kremlin’s delegate vetoed the resolution, This is what caused Ukraine’s allies on the Council to refer the matter to the General Assembly.

This was the first time in 40 years the Security Council has referred a crisis to the Assembly and only the 11th time an emergency session of the UN General Assembly has been called since North Korea invaded the South in 1950.

It was summoned under a “uniting for peace” resolution, in which global threats may be referred to the General Assembly, “if the Security Council, because of lack of unanimity of the permanent members, fails to exercise its primary responsibility to act as required to maintain international peace and security.”

Even without UN approval, UN Charter permits Ukraine to hit targets inside Russia. Article 51 provides: “Nothing in the present Charter shall impair the inherent right of individual or collective self-defense if an armed attack occurs against a Member of the United Nations, until the Security Council has taken measures necessary to maintain international peace and security.”

The danger, as the Kremlin constantly warns, is that Russia might escalate, perhaps even to using nuclear weapons against Ukraine or its backers. The possibility of escalation is intimidating, but Putin is an egotist concerned for his own survival even more than for his macho image. If he remains a calculating schemer, he will not risk response in kind by NATO.

As for Ukraine, it has already displayed through artillery barrages, suspected behind the lines acts of sabotage, and drone attacks on targets in Russia that it understands its right to self-defense. The US has every legal right, and possibly a moral obligation, to supply the longer-range weaponry that would make a real difference.

Walter Clemens is an Associate at Harvard University Davis Center for Russian and Eurasian Studies and Professor Emeritus of Political Science, Boston University. Clemens’s books include ‘Can Russia Change?’ and ‘The Republican Virus in the Body politic’ wclemens@bu.edu.