We need to be prepared to talk with the Russians about the consequences of the war. 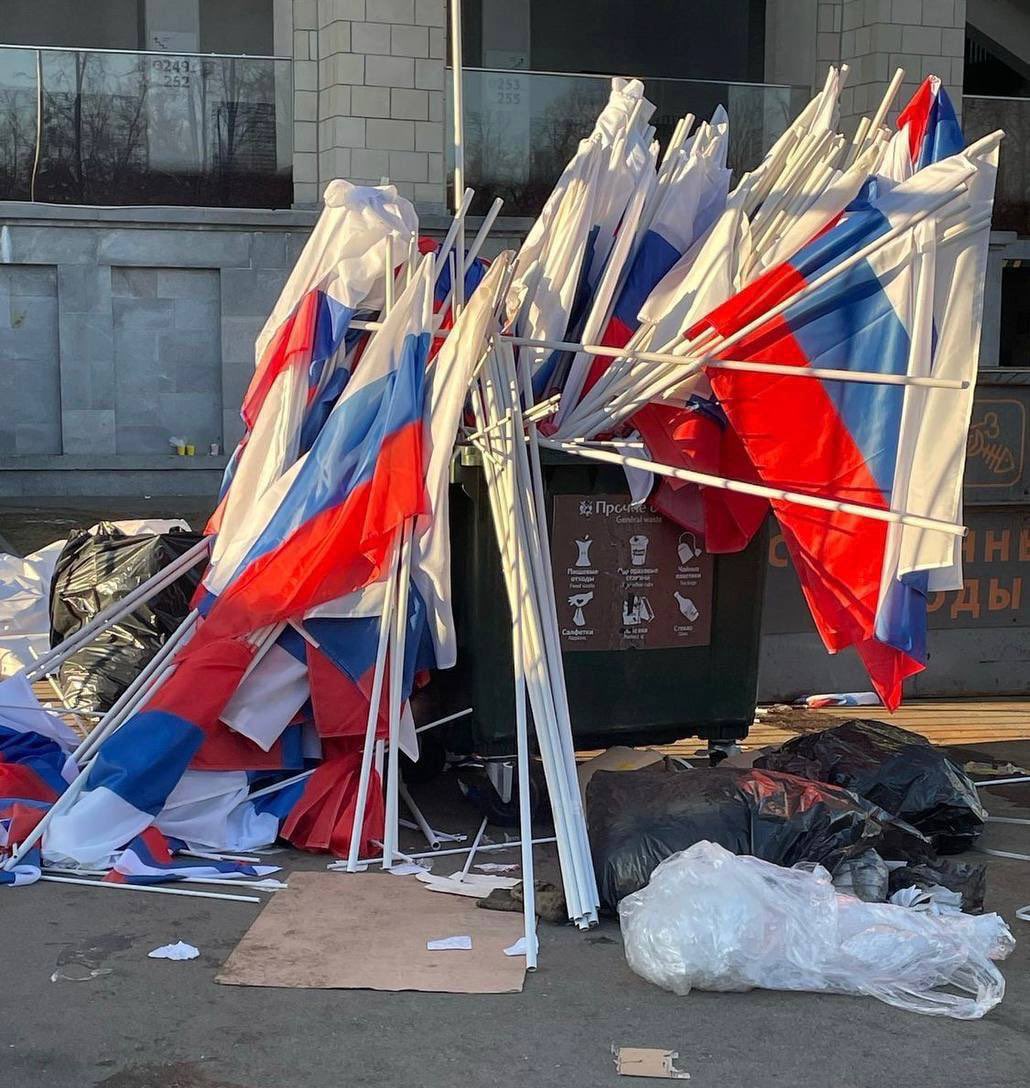 Photo: Russian flags in a garbage dumpster after a rally. Source: UkraineBizMag/Twitter https://twitter.com/Biz_Ukraine_Mag/status/1506311026400272396

Despite the massive attacks on Ukrainian infrastructure underway for several days, Russian propagandists are beginning to signal that they understand deep down that the Kremlin is losing the war. The response is an attempt to mobilize the population by painting a bleak and frightening picture of what defeat would look like.

Russia responded to the October 8 attack on the Kerch Bridge by pummeling Ukrainian infrastructure and civilian areas, a form of collective punishment that it’s already suggested, may amount to war crimes. These attacks are now new — Russia has targeted civilians throughout its full-scale invasion — but the current scale of attacks is huge. On the night of October 12-13 alone, more than 40 Ukrainian settlements were hit by Russian barrages.

Yet these attacks have made no appreciable difference to Ukrainian military operations. Advances continue on the Kharkiv and Kherson fronts, as they have for the past month, leading many analysts to conclude that Russia’s targeting of civilians and infrastructure is a sign of limited military options.

It seems that at least some Russian propagandists understand this. Along with bold threats and calls for further strikes on civilian infrastructure, there is a growing amount of commentary describing the possibility and consequences of defeat. In particular, these fears are being voiced by participants in the country’s foremost propaganda show, Evenings with Vladimir Solovyov.

Here, defeat is painted as a historical disaster, and not just for Russia. One participant on the show, director Karen Shakhnazarov, stated on air at the end of September that the West does not understand the consequences it would suffer if this happened. In her view, the West’s dreams of gay pride parades on the streets of Moscow would be disappointed, and instead “we will see the bloody disintegration of a country stuffed with nuclear weapons, the consequences of which will be unpredictable.”

Likewise, the website of Russia’s main news agency, RIA Novosti, in an article entitled “Russia Can’t Afford to Lose”, stated that mayhem would result. “Any past weakening of Russia was accompanied by bloody conflicts at its borders,” the author wrote, recalling the post-Czarist Russian Civil War and conflicts inside the failing Soviet Union around the time of its collapse. The West, it stated, would without question seek to exploit Russia’s weakness and create new bloodshed

These are established themes in Putin-era propaganda. During the spontaneous popular protests of 2011–2012, propagandists told Russians that a change of power would inevitably lead to “the collapse of Russia, bloody chaos, and war.” The population was told that a “Swamp Revolution” had been prepared by the CIA, which sought to replicate in Russia the uprisings in Libya and Syria.

To justify his September 21 “partial” mobilization, Putin again played on such fears of disorder and dismemberment, declaring that “the goal of the West is to weaken, divide, and finally destroy Russia.” This theme has since been extended to more actively make the point that defeat is a disaster not just for the government, but for ordinary people who would suffer terribly from the depredations of “the collective West.”

Russian propaganda can — and often does — look absurd to outsiders. The falsehoods are so transparent that there is no need for individual refutation. And yet events, conceived and executed by the Kremlin leadership can be self-fulfilling. If before 2022, or especially 2014, the West never considered the need for war — or even in its wildest dreams — victory over Russia, now it does. The desire to defeat Russia is the implicit goal of most NATO states’ efforts. So the threat to the regime which so recently seemed only the fruit of the fecund mind of Vladimir Putin, now threatens to come true.

This trend is clearly reflected in an article published by Readovka, one of the popular pro-war Russian Telegram channels, under the headline, “Woe to the vanquished. What happens if we lose.” Unlike previous propaganda myths, some consequences of a Russian defeat are described in quite realistic terms.

Readovka says that defeat will mean the loss of Donbas and Crimea; that Russia would have to “surrender for trial a large number of people,” including “militiamen and journalists” who represent “the most energetic and active part of the country.” There would follow a shortage of money and technology; the country would be forced to admit guilt for its past behavior (in other words, the notorious “de-Nazification” campaign), as well as accept a process of decolonization, meaning a pull-back from the lands the Kremlin refers to as the near-abroad.

The West and the Russian opposition face a complex mission: to assist Russian society to accept the inevitable consequences of defeat and to explain that these are not as terrible as the propagandists say (at least for ordinary Russians.) But in the end, it must also be stated that countries which wage wars of aggression against their neighbors must accept that they have lost, and that this is no one’s fault but their own. This is not merely a whim of the victors, but a natural consequence of the crimes of the Putin era.