What is “Hybrid Warfare,” Really?

What NATO should do to stay resilient in the face of its challenge. 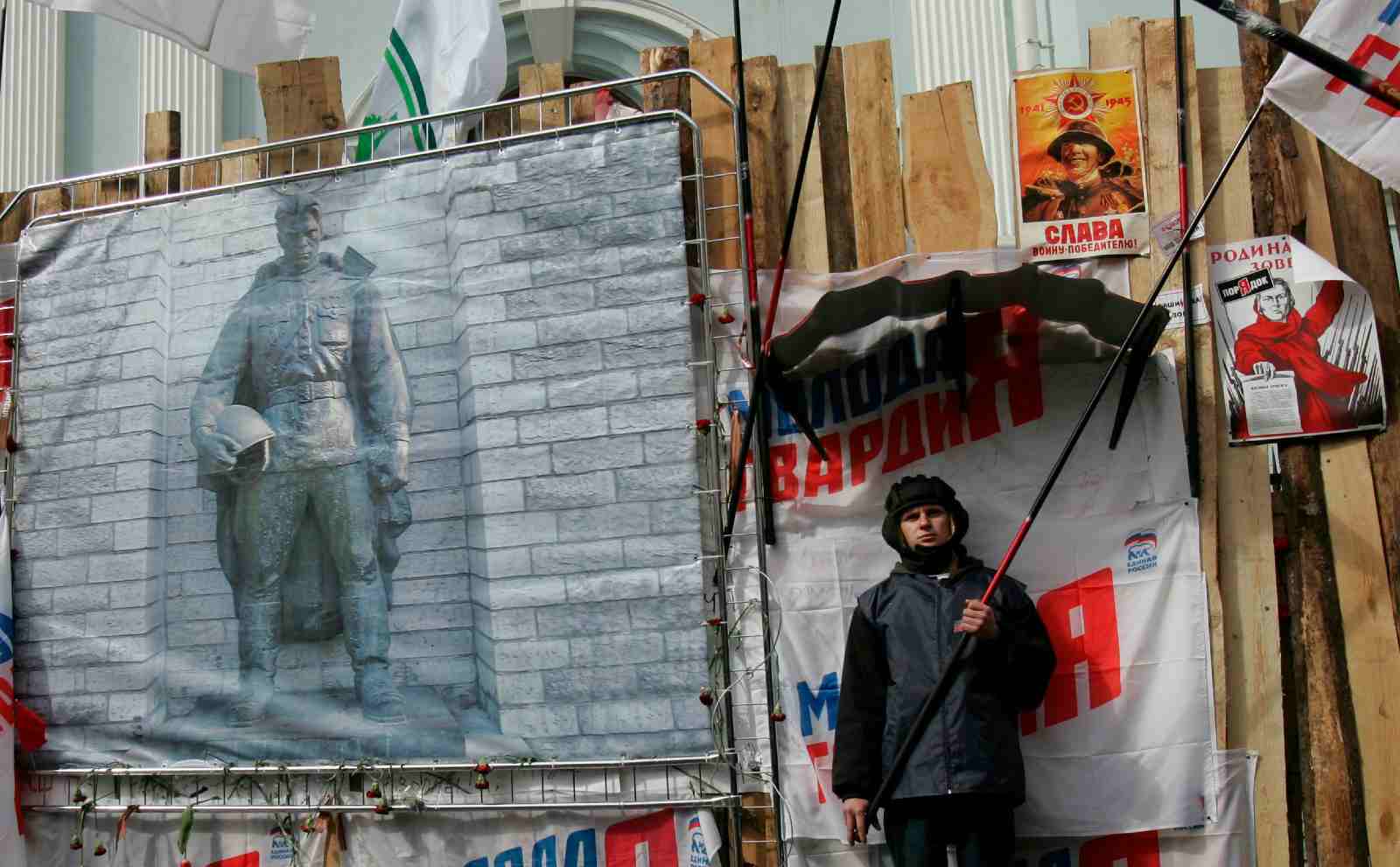 Photo: A protester holds a flag during a picket of Kremlin-loyal youth organizations in front of the Estonian embassy in Moscow on May 3, 2007. The poster on the left shows the statue of a Red Army soldier, whose relocation in Tallinn has sparked recent tensions between Russia and its ex-Soviet neighbor. Credit: REUTERS/Denis Sinyakov

The term “hybrid” comes from Latin, as it was used in the Roman Empire to describe a child born to parents of different social status (for example a Roman citizen and a slave). Later on, it evolved to denote phenomena, entities, or actions of combined nature that are not mechanically “mixed”, but are organically integrated, cohesive, and coordinated. As understood by NATO, “hybrid threats combine military and non-military as well as covert and overt means, including disinformation, cyberattacks, economic pressure, deployment of irregular armed groups, and use of regular forces. Hybrid methods are used to blur the lines between war and peace, and attempt to sow doubt in the minds of target populations.”

The first recognizable academic use of “hybrid” as applied to warfare dates back to 2007, when LTC Frank Hoffman wrote about the rise of hybrid wars in the Middle East context — namely the combination of kinetic and non-military tools used by actors such as Hezbollah during Israel’s military campaign of 2006. When Russia launched its aggression against Ukraine in 2014 using a range of non-military or clandestine means cloaked by extensive disinformation efforts and accompanied by official denials, NATO began using “hybrid” as the term to describe what looked like a new type of warfare at the time.

In July of 2014, while Russian covert efforts to infiltrate and take over the Donbas were underway, the Western analytical community “discovered” an article written by Army General Valeriy Gerasimov, the Chief of the General Staff of the Russian Federation’s Armed Forces in February of 2013, titled “The Value of Science is in Foresight.” The article contained a curious diagram depicting the components of modern warfare, highlighting, in particular, the centrality of non-military means and their prevalence over military ones (in a ratio of 4 to 1. Information warfare was identified as the central element of modern warfare across all of its phases, from the covert origins of a conflict to the peace-enforcing operation at its end. In his initial gloss of the diagram’s core tenets, analyst Mark Galeotti coined the “Gerasimov Doctrine,” a term that became widely used as a stand-in for Russia’s model of hybrid warfare. Galeotti later revisited his original assessment and, together with other Russia analysts, concluded that there is no such “Doctrine” per se, but rather that the model itself represents Russia’s views of what warfare looks like on a global scale in the 21st century.

To be fair, the “Gerasimov Model” combines elements of both: it has both a descriptive value (what modern warfare is as perceived by the Russian leadership), as well as a prescriptive one — how the Russian military should be studying its elements and effects, and applying them against Russia’s adversaries. Furthermore, it has become clear that Gerasimov did not invent this notorious “model” on his own. His thinking was heavily influenced by more recent writings of Russian military theoreticians, as well as by Soviet military strategists from the 1920s and 1930s, such as Svechin, Isserson, and others. They all emphasized the centrality of political warfare and information warfare, as well as rapid covert deployments of troops and the absence of formal declarations of war in the modern era.

Although many actors have used non-military tools throughout history to divide and defeat their enemies, hybrid warfare in the 21st century has acquired new relevance. It has been elevated to become the “fighting style of choice” of weaker, revisionist, revanchist powers who are eager to elevate their status on the world scene but do not dare trigger a large-scale conventional confrontation that they know would result in a military defeat or a global nuclear conflagration. Instead, they opt for a combination of military and non-military means to divide and defeat their stronger adversaries without resorting to a full-scale war. The hybrid warfare “toolbox” includes elements, or “strands,” such as political, diplomatic, economic, and financial warfare, legal (lawfare), as well as socio-cultural efforts, with infrastructure, intelligence, and criminal groups being widely used, too. These covert, initial penetration steps are followed by the deployment of covert military operatives and, if necessary, by limited military contingents to force the adversary into submission and enforce peace under the hybrid aggressor’s terms by deploying a “peacekeeping mission.” The hybrid operation in this format is backed by the implicit threat of tactical or even strategic nuclear deployment, in order to cow governments and influence public opinion, with information warfare, disinformation, deception, and propaganda serving as the hybrid efforts’ “backbone” from start to finish.

It is important to note, however, that not all combinations of military and non-military means should be qualified as “hybrid efforts.” Operations that skew heavily non-military, and where the hybrid aggressor tries to deny its involvement and its real objectives, merit the title. Similarly, contemporary Western efforts to respond, such as the U.S. “Multi-Domain Battle” Doctrine, or the use of non-military tools by Western militaries (such as information operations, StratCom, intelligence, political, diplomatic, legal, and economic tools) should not be regarded as a form of Western “hybrid warfare,” despite what Russian propaganda might claim.

Russia’s hybrid invasion of Ukraine initially caught the trans-Atlantic community by surprise, especially its combination of speed, cohesion, and coordination among military and non-military actors involved in the operation. Still, since 2014, NATO has been able to respond and adapt quickly to the modern application of these old forms of warfare.

Still, this is not a “mission accomplished” moment. The organization must continue to play an active role in tackling hybrid threats emanating from state and non-state actors, and it must do so efficiently and decisively, for the sake of preserving the international order and the trans-Atlantic security architecture. As an alliance of many nations, each with its “fortés” and special skills, contributing to the common transatlantic security, NATO can tackle not only the various hybrid domains taken separately but alos rather provide “a synergy platform” aimed at strengthening the “hybrid defense” of our democratic societies. It must fight military threats from outside, as well as threats from within, across the entire spectrum of political, social, legal, energy, economic, intel, and cyber domains. Many of those, of course, will have to be dealt with in cooperation with other supranational organizations (such as the EU) that have better competency on non-military aspects, such as the economy. Still, NATO is at its best when it unites and coordinates these kinds of efforts, in a bid to achieve vast synergies that improve the resilience of its members.