US Lend-Lease — Russia Gets Nervous

The US Congress last week approved a Lend-lease Act for Ukraine, resurrecting the World War II program of that name. Russia is appalled. 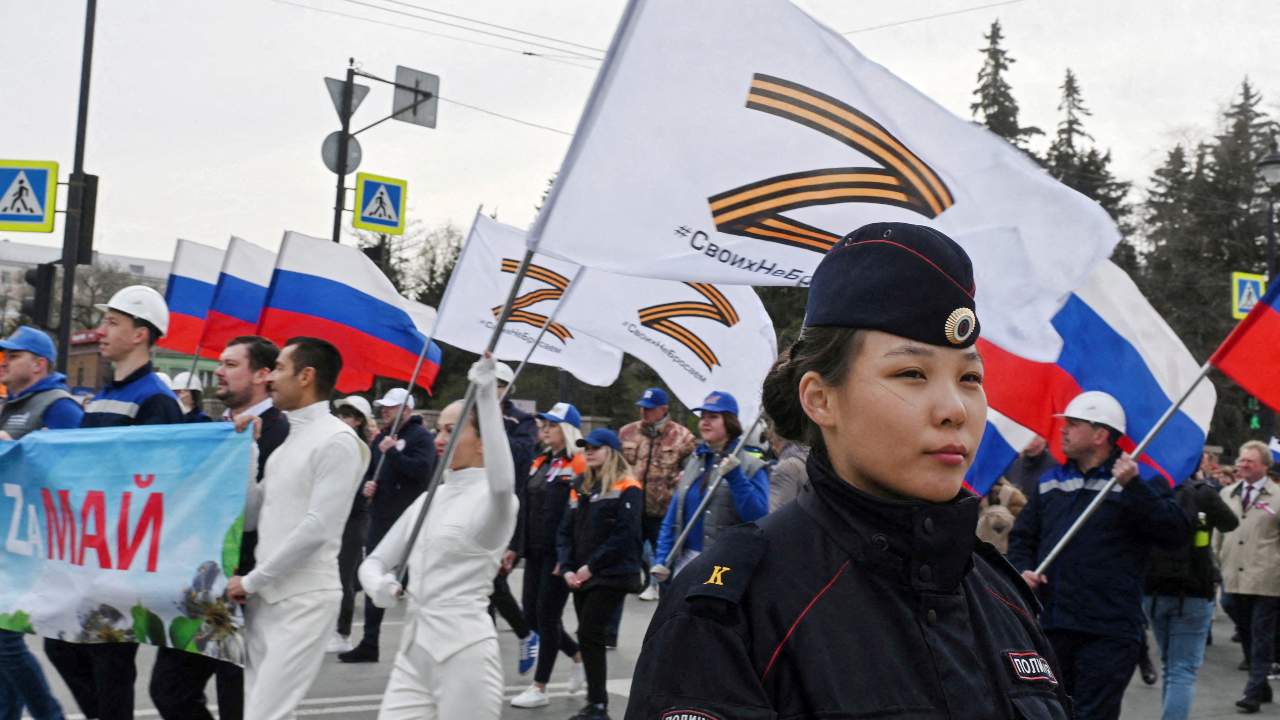 Photo: A police officer stands guard as participants march during a May Day rally in Omsk, Russia May 1, 2022. Credit: REUTERS/Alexey Malgavko TPX IMAGES OF THE DAY.

Judging by the reaction of Russian propagandists, the news has greatly alarmed the Kremlin. The April 28 decision creates a simplified procedure to supply any types of weapons to Ukraine and other countries, including Poland.

The administrators of the pro-Kremlin Telegram channels agreed that the decision — coming on the same day as President Biden’s announcement of an additional $20bn for military aid to Ukraine — will now drag on and could become a “new Afghanistan” for Russia. The propagandists listed the advanced weaponry that Ukraine stands to receive and predicted that from now on “the entire territory of Europe will become a space for massive armed confrontation with Russia for years to come.” Some of the authors acknowledged that the new program “will deprive Russia of local technological and military superiority.”

Others put on a brave face and observed that similar deliveries “didn’t really help the Afghan national army”, but at the same time advised the Russian military to quickly “grind down the enemy’s manpower, and then deprive it of the physical ability to deliver foreign weapons to the left bank of the Dnieper, at the same time destroying any warehouses.”

Parallel with this, Kremlin-friendly media sought to discredit Lend-lease. Propagandists explained that the program is primarily designed by the Americans to grow their economy through budget financing of companies producing weapons. At the same time, they argue that the US and European NATO allies are stripping their own arsenals of weaponry and leaving themselves vulnerable. “Currently, American social networks are full of expert opinions that even replenishing the weapons supplied to Ukraine would take years,” one online newspaper stated.

The tone of anxiety is nonetheless unmistakable. “The volumes of weapons that Western countries supplied to Ukraine are simply monstrous,” the same paper said. “For Russia, the worst option would be if the U.S. and the West really mobilize. Then they will just fill Ukraine with weapons.”

At the same time, the Russian media seek to intimidate Ukrainians with the idea that “America has begun to work on the transformation of Ukraine into a long-term field of military confrontation,” and is ready to completely destroy Ukraine in order to weaken Russia. Military assistance is not provided free of charge, they say, and sooner or later Ukraine will have to repay debts “literally to the penny”, and they also prophesy a “monstrous corruption” which will mean that many types of weapons may not reach the front.

Russian reaction is also haunted by the historical resonance of the term lend-lease, since the last time it was used — initially to aid Britain in 1941 — the aim was to defeat Naziism, a tricky issue when Vladimir Putin argues that is precisely his aim in Ukraine. The answer, as is so often the last resort, was to rewrite history. So, several Telegram channels settled on an article that stated that World War II US lend-lease was sent not only to help the allies, but also to their enemy, Adolf Hitler. (As it turned out, the article was about American bank loans issued to Weimar Germany in the 1920s.)

Sometimes the mask slips. While Ukraine is referred to as a “new Reich,” there is an inconsistency in the coverage. Back in January, a month before Putin’s latest invasion was launched, the Kremlin ideologue Alexander Dugin wrote on his portal with extreme frankness: “The Treaty of Versailles was so humiliating for Germany that revenge like Hitler’s National Socialism was a foregone conclusion of the Treaty of Versailles in 1919. The West did the same with Russia in the 90s. But under Putin, Russia has become stronger, has become an axis, and has begun to behave sovereignly.”

More recently, Rostislav Ishchenko, another recognized Kremlin “expert on Ukraine,” shared similar views on a website that is officially part of the state-run “Rossiya Segodnya.” Carefully criticizing those who cheerily suggest a tactical nuclear strike on Warsaw, he reminded readers that Russia should not repeat Hitler’s mistake. “Just a reminder that Hitler believed that Great Britain and France would not declare war on him because of the attack on Poland . . . But war was declared,” he warned his “hot” comrades.

Be that as it may, it is obvious that American lend-lease has Russia seriously worried. This is not surprising, given that even pro-Kremlin sociologists admit that the number of people closely following the war has been switching off. The numbers have “been declining for several weeks in a row.” Observers note: “The desire of broad sections of the population to escape from the existing realities, including through entertainment and other leisure formats.” Another important trend was the shift in the attention of citizens “from the political agenda to the economic,” as the consequences of Putin’s aggression come home to roost. This is an obvious worry for the authorities.

Despite this trend, the aggression of Russian propaganda has only grown in recent weeks. At first, the Ministry of Defense tried to prepare society for the possible use of nuclear or chemical weapons in Ukraine “under a false flag”, accusing the United States of preparing a provocation. However, the propaganda machine failed to understand the subtle aim and began bluntly stating that the war would most likely end with a nuclear strike by Russia. This is exactly how the editor-in-chief of RT Margarita Simonyan described the most likely outcome of the “special operation” while speaking with her colleague, the fiery propagandist Vladimir Solovyov on his program. At the same time, she emphasized that she was not against such an outcome, and Solovyov agreed, observing that “we will go to heaven, and they will simply drop dead.”

Such intense propaganda has at least two goals. First, it is designed to expand and mobilize the “passionate minority”, which, unlike the apolitical majority, is still actively involved in the political agenda. Secondly, propaganda is designed to increase the belief in an external threat to such an extent that Russians cannot even think about expressing dissatisfaction with their own socio-economic problems, which are worsening by the month.