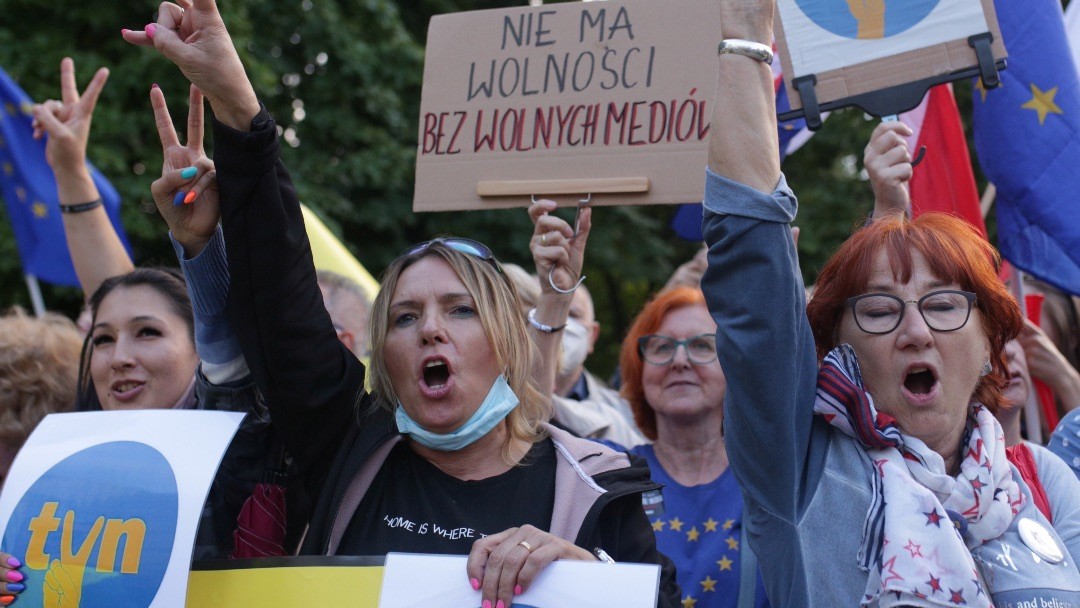 Photo: People attend a demonstration in defence of media freedom and against a proposed amendment to the country's broadcast media law regarding the share of foreign capital in Polish media, in Warsaw, Poland August 10, 2021. The placard reads: "There is no freedom without media freedom". Credit: Adam Stepien/Agencja Gazeta/via REUTERS.

Latvia Poised to Summon Conscripts as Russian Menace Grows Ukraine’s War of No Return Iran vs. the People: A Test of Legitimacy Western Elites — Rubles Bought (Some of) the Best What’s a Russian? Rebuilding Ukraine: A Historic Plan for Congress Prioritizing the Rule of Law: Ukraine Must Stay the Course
Explore

Introduced by the ruling right-wing Law and Justice (PiS) party, the bill prohibits entities outside the European Economic Area from owning a majority stake in Polish media companies. The legislation is widely seen as targeting Poland’s largest private broadcaster, TVN, an outlet that frequently airs critical coverage of the government and whose owner is the U.S. media conglomerate, Discovery Inc.

The vote provoked fierce emotions. Protesters gathered outside the Sejm, denouncing PiS for engineering a “coup” while thousands of demonstrators took to the streets in cities across the country, including in Cracow, Poznań, Wrocław, Szczecin, and Lublin.

The vote brought immediate protests from Poland’s closest friends. Vice President Antony Blinken said the U.S. was “deeply troubled” by the vote, while the European Commission Vice President Věra Jourová described it as a “negative signal.”

The bill’s passage through the Sejm was chaotic and bad-tempered. The opposition approved a motion to adjourn the Sejm session until next month, but the speaker, a PiS member, decided to order a second vote, provoking bitter accusations that she was running roughshod over the procedure. On the second vote, the motion failed after three members from the right-wing Kukiz’15 party switched sides. Parliament remained in session and passed the media bill 228-216, with 10 abstentions.

The bill now proceeds to the Senate, where the opposition has a majority. Senators can delay legislation for up to 30 days, but any decision they make can be reversed by an absolute majority in the lower house of parliament. It is unclear if the bill’s supporters can muster that, especially now that the government has lost its parliamentary majority following the defection of its junior coalition partner, the Agreement (Porozumienie) party. The coalition’s collapse came a day after Jarosław Gowin, the Agreement’s leader and a vocal critic of the bill, was fired as deputy prime minister.

The severity of the impact on US-Polish relations is unclear. The US has increased its military presence on Polish soil in recent years, a key strategic aim for most of the Polish political class. The U.S. has not threatened retaliation as yet, but Blinken said it would affect foreign investment in the country and also “significantly weaken the media environment the Polish people have worked so long to build.” It would also further antagonize relations with the EU, already strained due to a long-simmering dispute over the rule of law. The U.S. also attacked a government bill to limit the compensation rights of Holocaust victims.

Since it came to power in 2015, PiS has weakened the basic pillars of Polish democracy. It has attacked judicial independence and scapegoated minorities. It has also threatened press freedoms, purging editors and journalists from state-owned Polish Radio and Polish TV and replacing them with loyalists.

But to this author, the crisis seems different and more serious. To be sure, Polish civil society remains strong – witness the demonstrations across the country. Still, if the bill becomes law and the leading source of independent broadcasting for millions of Poles is restricted or outright eliminated, the country will enter uncharted territory. How Poland’s key ally responds could make all the difference.