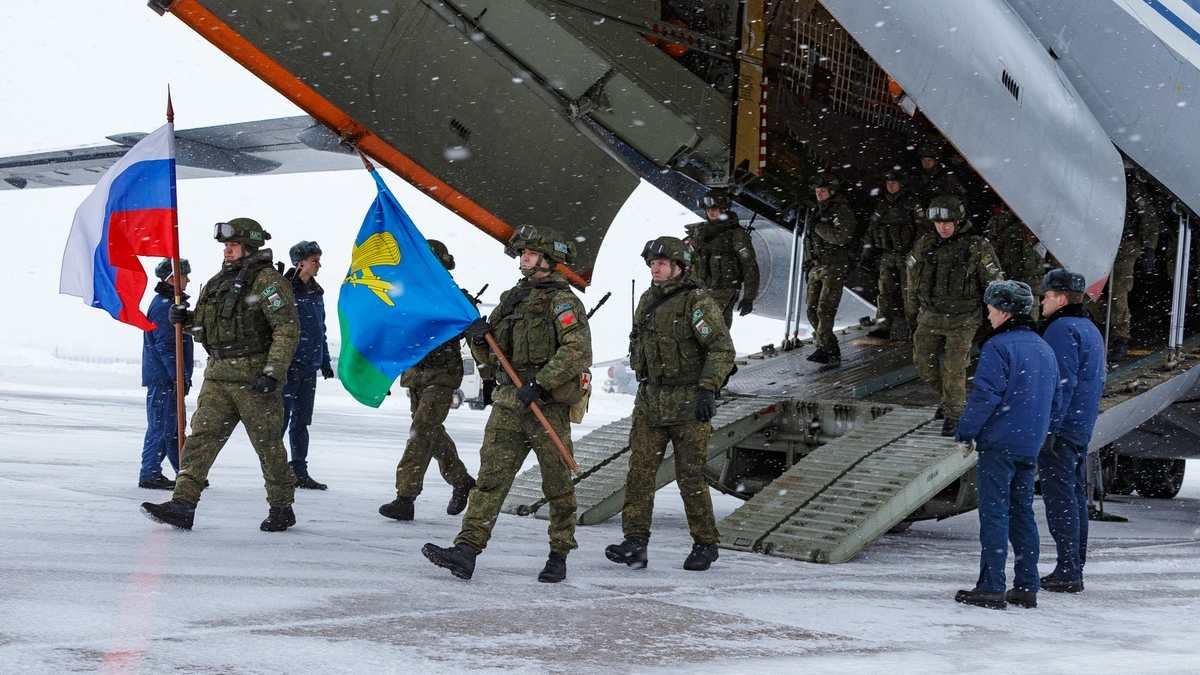 Photo: A meeting ceremony in the Moscow Russian paratroopers from the CSTO peacekeeping contingent in the Republic of Kazakhstan. Credit: Collective Security Treaty Organisation Photo Gallery.

Russia’s full-scale invasion of Ukraine on February 24 has created enormous problems for its military industry. With defense firms subjected to some of the harshest sanctions in modern history, enormously curtailing access to high-tech components from the democratic world, the Russian armed forces are struggling to repair equipment, while re-supplying its invading units and manufacturing new weapons. There are signs that the Kremlin may seek to cut this knot by conscripting a reluctant ally, Kazakhstan, to assist.

Russia’s defense industry faced problems even before February 24. Plagued by debt, corruption, an absence of corporate transparency, structural problems, and poor economic efficiency, its defense manufacturers were only able to produce weapons and technologies largely thanks to strong state support. Today, with the Russian state unable to solve the defense sector’s multiple problems, the industry finds itself in tatters. For example, the US government stated last month that both Russia’s major tank producers — the Uralvagonzavod Corporation and the Chelyabinsk Tractor Plant — had been left idle by a lack of foreign parts. Meanwhile, a war that has exposed so many failings in the Russian military, rages on even though the army continues to face difficulties with logistics and supply.

To mitigate this, Russia’s military industry will seek alternatives for production and repair.

As the number of Russia’s allies dwindles worldwide, it is already calling on partners at the six-member Collective Security Treaty Organization (CSTO) — the Russian-led military alliance of some neighboring states — for support. While Belarus is usually Russia’s CSTO partner of choice, it will be of little help in the current situation as its own defense industry is also a direct target of Western sanctions. Kazakhstan, on the other hand, is largely unscathed by Western sanctions and was recently the recipient of CSTO assistance in the bloody suppression of a popular uprising earlier this year. It may be thought that its leadership is in a poor position to resist the Kremlin’s demands, despite its statements to the contrary. Its business elite is also intimately bound up with Russia.

Since the collapse of the Soviet Union in 1991, as Kazakhstan developed its military industry, it maintained a significant economic and defense interdependence with Russia. Its participation in Russian-hosted military exercises, cooperation with Russian defense companies, including on repairs of Soviet-era Russian weapons, and development of new technologies for mutual use, demonstrate a strong and sustained partnership. And most recently, given the fragile security environment following Russia’s invasion of Ukraine, its deputy finance minister tabled a three-year budget proposal to increase defense spending by approximately $1 billion.

Kazakhstan also offers a possible escape route from Western sanctions. The Russian state has control over multiple military and industrial complexes located on Kazakh territory, which are still fully operational and unaffected by Western sanctions.

One prominent example is the Baikonur cosmodrome, which Kazakhstan leases to Russia. Baikonur serves as a major development platform for Roscosmos, Russia’s state-owned space company. The firm utilizes Baikonur to directly aid the Russian space and military industries. Although the company is now sanctioned by the West, it can continue to freely operate even as Russia continues its war of imperial expansion.

Additionally, Kazakhstan and Russia may have an opportunity to strengthen cooperation in the automotive industry, particularly in developing components and spare parts. Kazakhstan is experiencing an increase in automotive production and manufactures multiple Russian brands of passenger cars (Lada, Renault) and commercial vehicles (GAZ, KAMAZ, LIAZ, MAZ, PAZ, UAZ, and URAL.) Given Russia’s military needs for its ongoing war in Ukraine, the Kremlin will aim to leverage these projects and industry ties to access certain equipment, repairments, and technology that Russia cannot provide due to the impact of sanctions.

The Kazakh government is already walking a thin line when it comes to Russia’s invasion of Ukraine – it has not condemned the invasion nor supported it in the UN General Assembly vote. It has issued an official statement of respect for Ukraine’s sovereignty and territorial integrity but continues to use Kremlin talking points by referring to the war as a special military operation. The President of Kazakhstan, Kassym-Jomart Tokayev, announced that Kazakhstan will not assist Russian state- and non-state-owned companies in circumventing sanctions, but that the two will nonetheless continue their economic cooperation.

Does the Kremlin intend to pressure and use Kazakhstan in this economically hazardous operation, knowing that it may cause the country to be targeted? All the signs are that it does. At a meeting of the CSTO in Moscow on May 16, both Russia and Belarus called for Kazakhstan’s economic and industrial support to overcome Ukraine’s and NATO’s “aggressive” politics. Neither Russia nor its ally Belarus have been shy of reminding Tokayev of the “kind support” provided in quashing the January protests. The two countries have clearly implied that Tokayev has an unpaid debt.

Yet Tokayev faces a tricky situation at home. Not only does he have a demonstrably unhappy population, but many have also expressed opposition to Russian aggression in Ukraine. Publicly, Kazakhstan has expressed a willingness to offer a new home to Russian companies seeking a freer business climate, while stating that sanctioned entities will not be welcome. It is unclear how that distinction will be enforced.

To ramp up the pressure on Kazakhstan, Kremlin-linked Russian voices inside the country have also claimed that ethnic Russians, who compose nearly 20% of Kazakhstan’s total population, face discrimination from ethnic Kazakhs. There is little subtlety here — Russia always claims its speakers are oppressed when it is disgruntled with non-compliant smaller neighbors, and rarely provides much evidence.

Hence, Kazakhstan finds itself in an uneasy situation. To avoid Western sanctions and maintain its mostly Russia-linked economic stability, the Kazakh government is trying to appease both a large neighbor and a domestic audience. Russia has made it clear that it is fully aware of the country’s middle-man dilemma. But as Vladimir Putin becomes more isolated and desperate, he may not give Kazakhstan much of a choice.

Ivanna Kuz is a Program Assistant at the Center for European Policy Analysis (CEPA). Previously, she worked at the NATO Headquarters in Brussels and for Democratic Leader Charles E. Schumer in the US Senate.

Danylo Tsurkan is a Transatlantic Defense and Security Intern at the Center for European Policy Analysis (CEPA.)