Ukraine: Tales of Hope and Despair

Since the beginning of Russia’s biggest invasion of Ukraine, the western city of Lviv has served as a refuge for multiple thousands fleeing home. 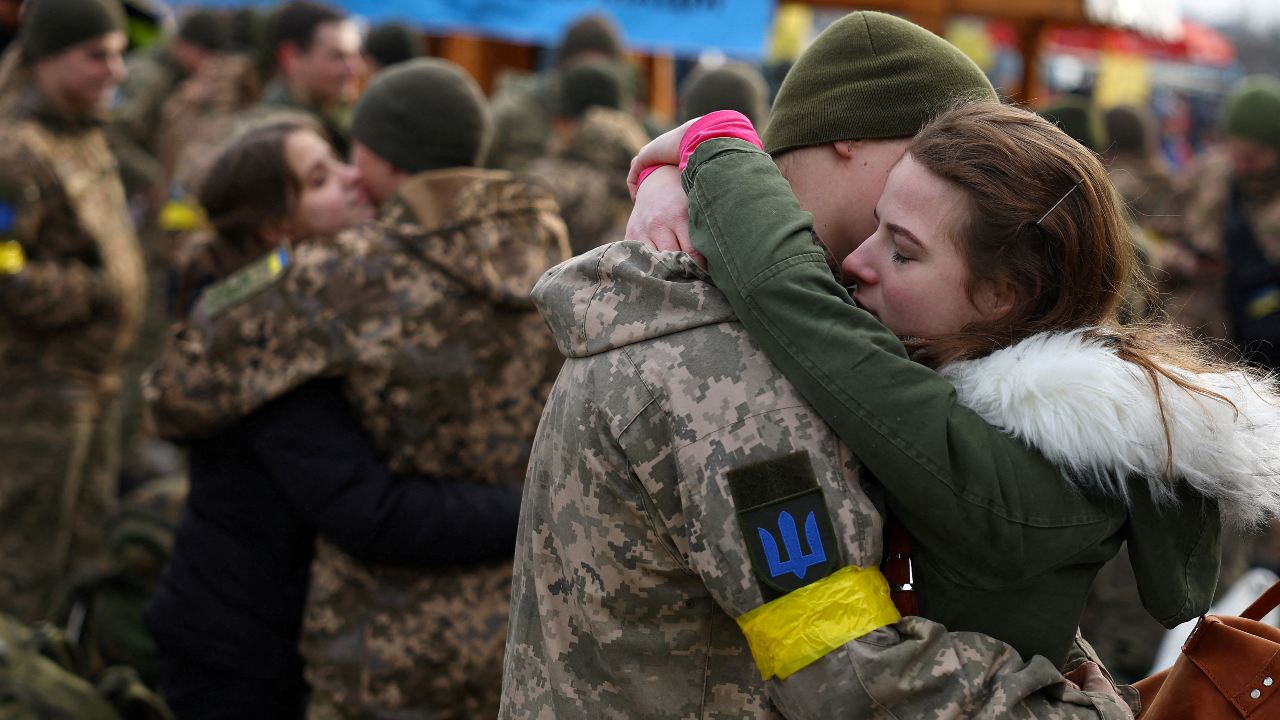 Photos: Olga hugs her boyfriend Vlodomyr as they say goodbye prior to Vlodomyr’s deployment closer to the front line, amid Russia's invasion of Ukraine, at the train station in Lviv, Ukraine, March 9, 2022. Credit: REUTERS/Kai Pfaffenbach

It’s not hard to find stories of great sadness and loss in Lviv, and of new hope. Sometimes everything is wrapped into a single heart-breaking tale.

When the war began, a family in the southern part of Mariupol faced an awful dilemma. As Russian shells began to rain down indiscriminately, one woman went into labor. Her husband rushed her to the hospital and the baby was successfully delivered, albeit prematurely. The bombing worsened; the baby needed long-term medical treatment, so the young family were told to leave the hospital and evacuate from the city.

There was no time to lose, and no time to take their eldest daughter or grandma who were left behind in increasingly ferocious urban warfare. It took the parents and their newborn baby two weeks to reach Lviv by which time medical staff concluded the infant needed care in a neighboring country.

They have lost contact with the girl and grandmother in Mariupol. The husband took his wife and baby to the Polish border and bid them farewell; as a man of fighting age, he was unable to leave. The man, of course, was not allowed to leave the country. Within minutes of waving them off, the news arrived that his older daughter and mother had been killed as his wife was giving birth in Mariupol.

“It was impossible to even look at him: his wife with a newborn child in Poland, the eldest daughter dead, his mother gone,” says Anastasia Vararu, a coordinator at the Ukrainian Baptist Theological Seminary in Lviv, where the family had stayed for a few days. The husband gathered himself together, and after a few days, he joined other volunteers and headed east to the frontline near Zaporizhzhia, northwest of his hometown of Mariupol.

The seminary caters to all those in need, providing refuge to about 200-400 people every day. The flow has been relentless. “Some people just walked out of the train station and prayed on their way. They said God has brought them here. One woman said, ‘You can’t not let me in, I don’t know where to go, I was brought to you.’”

The initial idea of simply caring for former students, or only Christians soon proved to be inadequate. “We indiscriminately accepted those who found us, heard about us,” she says. “Our colleagues, volunteers from the railway station, started bringing people here. In the first days, we found mattresses, mats, bed sheets . . . All three floors here were occupied in the first weeks, we no longer knew where to put people.”

The refugees are provided with everything the seminary can find. Volunteers seek to offer some human balm to those who have experienced disruption, loss, trauma, and sometimes outright horror, especially to those coming from Mariupol and Kharkiv where the Russian military has made no distinction whatsoever between civilians and military. “Our mentors take care of their emotional needs, our team of chefs took care of physical support; a storehouse of clothes, cosmetics, and other essentials is always available,” Anastasia says.

Fresh flowers are visible throughout the building; they have become a tradition since a group of refugee women arrived at the seminary and began to cry, seeing something of beauty and peace after going through hell. Since then, volunteers always ensure that there are flowers on the tables and decorative lights on the ceiling.

The previous day, an elderly couple had arrived from Kharkiv. Their story is typical and brutal. After spending a month sheltering in a basement from never-ending Russian attacks Forced to leave their home by the endless shelling and Russian air attacks, and with Lydia suffering a range of health conditions serious enough to warrant treatment in a neighboring, NATO state, they traveled for more than 24 hours on a blacked-out train with carriages crammed to accommodate three times the usual numbers of passengers.

“Every day a free evacuation train leaves Kharkiv,” Fedir says. “We were brought to the station by volunteers, they helped us board the train. They help the disabled, they help everyone, well done!”

His wife chimes in: “We were all together, old and young; children were crying. People stand all night, switching places from time to time.” There were long halts as the train was warned of danger ahead, finally proceeding only when the danger had passed.”

Lydia and Fedir are contemptuous of Putin’s legions. “The situation in Kharkiv is very difficult now, the massacre continues every day; Kharkiv is surrounded on all sides, but our people are defending themselves and not letting them into the city,” she says, suggesting that “even the Germans” had not behaved as badly during World War II.

They say Putin expected to be greeted with open arms and flowers, because Kharkiv is Russian-speaking and close to the border. Some had their doubts about the Kremlin’s behavior before, but now, Fedir says, the vast majority now identify as Ukrainians. They have no desire to be “liberated” by the people blasting their city to pieces.

Relieved by the extraordinary normality of life in Lviv (“there’s cars driving, people walking around!”), they nonetheless need to support that neighboring Poland has offered to its neighbors.

The burden of the past weeks can be felt in the tired faces and voices of this good-natured couple, but at the same time their fighting spirit shines through. They may go abroad, but they plan to return to their native Kharkiv.

The Russians “want to have Kharkiv by [Soviet victory day] May 9, but they will lose on all fronts,” says Fedir.

Kateryna Panasiuk is an author and journalist studying politics at the Ukrainian Catholic University. When war came to my home, Ukraine, she chose to do what I know best and started a volunteer project to collect and share stories of Ukrainians affected by the war.

Mykyta Vorobiov is a freelance journalist studying politics at the Ukrainian Catholic University and the National University of Kyiv-Mohyla academy. Forced to leave Kyiv when war broke out, he has since combined work at Lviv City Council with coordinating a journalism project and editing articles.

If you wish to donate to the seminary and to help establish a new center near the frontline, please use this link: https://upfmissions.org/ubts/ubts-response-to-crisis-in-ukraine/#toggle-id-5