Vladimir Putin claims that the historic convergence of values among the various peoples of Russia has produced a “Russian world” in which they all cooperate. He’s wrong. 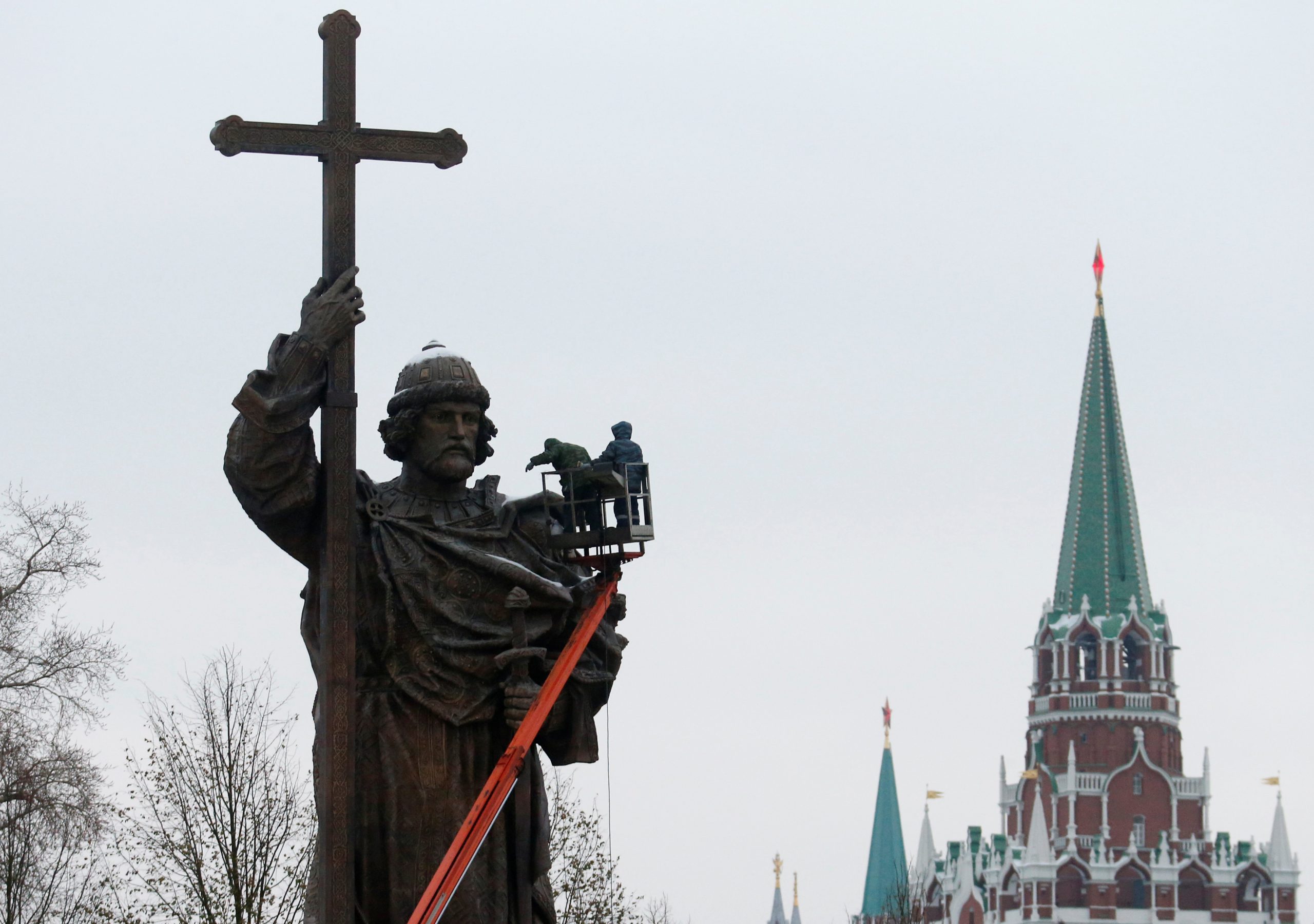 Photo: Employees work on the newly erected monument of grand prince Vladimir I, who initiated the christianization of Kievan Rus' in 988AD, with towers of the Kremlin seen in the background, in central Moscow, Russia, November 2, 2016. Credit: REUTERS/Maxim Zmeyev

Russia’s leader contends that Ukraine and its people are part of Russia. He wants to reunite them with their homeland—just as Hitler acted to bring German speakers in Austria and Sudetenland heim ins Reich — “home” in his Third Reich.

As Timothy Snyder puts it, we see in the ruins of Ukrainian cities and in the Russian practice of mass killing, rape, and deportation, that the chilling claim of a nation’s non-existence is the rhetorical preparation for its destruction; for a genocide.

Ukraine and Russia are one, says Putin, because they share the same civilization of Orthodox Christianity imported from Byzantium in 988 and sustained in Muscovy, the “Third Rome,” after Byzantium fell to Muslim Turks in 1453. Putin’s view resembles that set out by monks in Kyiv’s Monastery of the Caves in 1674. Fearing attacks by Ottomans and the threat from Catholic Poles to retake Kyiv, the monks published the Synthesis, a history textbook presenting Kyiv as the first capital of the Muscovite tsars and Muscovite Orthodoxy, a city that could not be abandoned to infidels or Catholics. The monks called for the unity of Muscovy with the Cossack Hetmanate. Russian empire builders in the 17th century were not yet thinking about national affinities, but as the years passed this story of Kyivan origins became ever more resonant, including during the Putin era. The facts remained the same but their interpretations evolved.

The idea that “civilization” is key to understanding world affairs is a gross oversimplification. The British historian Arnold Toynbee traced the rise and fall of 21 major civilizations from ancient times to the mid-20th century. American political scientist Samuel Huntington identified six or seven civilizations interacting — often clashing — with each other in the late 20th century. Ukraine, he wrote, is “cleft” between its Catholic/Uniate west and its Orthodox east. In 2011 Niall Ferguson published Civilization: The West and the Rest. These authors are correct that civilization — defined by Huntington as the broadest form of cultural identity — provides much of the context for state behavior, but it is seldom decisive compared to identity — how governments and peoples perceive their values and interests.

Stalin and others have tried to describe the objective factors that make a nation and inspire nationalism, such as geography. But this quest cannot succeed, because reality is subjective. If key segments of a population feel it is a nation, it is or can be. Great Britain and its American colonies shared a great deal of the same culture and language, but their values and perceived interests diverged in the mid-18th century. Step by step, they found themselves at war — from 1775 to 1783 and again from 1812-1815.

Johann Sebastian Bach, Immanuel Kant, Ludwig van Beethoven, and Johann Wolfgang von Goethe were shaped by the same civilization as Adolph Hitler, Hermann Göring, and Heinrich Himmler. If civilization can spawn such diverse outcomes, what does it explain?

A similar question emerges if we consider Taiwan and mainland China. Elites in Taipei and Beijing use the same language and share in the same traditions. Both capitals now claim to honor Confucian and other shared values. Both polities have grown richer from economic interactions. Still, they hover on the brink of war because most Taiwanese want to do their own thing — like Americans in the 1770s.

Xi Jinping claims that today’s China inherits a 4,000-year-old civilization. His mythmaking ignores the centuries when Chinese kingdoms fought one another and when China was ruled by Mongols and, in more recent centuries,  by Manchurians. When the Manchus faded, Nationalists and Communists waged a long civil war that could reignite at any time. Divergent readings of “civilization,” like religion, can spur conflict as well as unity,

Whatever the traditional roots of today’s Ukraine and Russia, these bonds mean little compared to the values and perceived interests of leaders, elites, and the public in each country. Indeed, their perceived interests have often conflicted for more than 1,000 years. As Putin and most serious historians agree, today’s Ukraine and Russia originated in Novgorod and Kyiv, small settlements turned into towns by Vikings in the 9th and 10th centuries. These adventurers, mainly from Sweden, founded the House of Rurik, the dynasty that ruled the East Slavic lands for more than seven hundred years—from 862 until 1598.

The Byzantines often referred to these aggressive Scandinavians as Rus’ — a term that may have derived from the Finnish word for Swedes — Ruotsi, The origin of the word Viking is unclear, but the Old Norse word víkingr  meant “pirate” or “raider.” The Vikings are also called Varangians in English and varyagi in Russian. Across Europe,  as in the lands of the Eastern Slavs, the Vikings first plundered; then traded; and then merged with the locals, giving up their language and pagan gods.

Regardless of their shared cultural roots, the Vikings were highly competitive. Rival princes struggled to ascend the pecking order from remote places like Pskov to the pinnacle principality, Kyiv, established centuries before Moscow, and called “Mother of all the Russias.” For centuries, Kyiv was seen as the center of political as well as religious power in the lands of Rus’.

For centuries too, the Rus’ were threatened by Turkic-speaking nomads from Central Asia. However, the Varyagi princes seldom collaborated with one another to resist the invaders. When Cumans (also known as Polovtsy) encroached in the 12th century, Prince Igor in Novgorod-Seversky fought to resist them but got little support from other Rus’ princes. Indeed, some allied with the Cumans. Parts of this story are chronicled in The Lay of Igor’s Host and Borodin’s opera Prince Igor. Indeed, some princes fought with Cumans against other rival princes, many of whom fought each other to gain hegemony in Kyiv, Russians see the Lay as a monument of Rus’ civilization, but Kazak writer Olzhas Suleimenov in Az i Ya contends it is replete with Turkic influences. (His book was published in 1975 but banned in the USSR until 1989.)

Unlike the views of Huntington and Putin on civilization, complexity science (a set of theories that originated at the Santa Fe Institute) helps us understand the ebb and flow of events in Rus’ from the Viking age to the present. Complexity science defines societal fitness as the ability to respond effectively to complex challenges and opportunities. Interdependent entities can collaborate for mutual gain or pull each other down, like crabs in a basket. This kind of fitness seldom results from a top-down direction or from the opposite extreme — random anarchy. It emerges from self-organization within a framework of shared values, laws, and customs—as in today’s European Union or yesterday’s United States.

Self-organized fitness failed to develop in the anarchic polities of Kyivan Rus’. The Viking princes had many incentives to cultivate self-organized fitness, but ignored or aborted abundant opportunities to do so. Similar behavior persisted in the politics of Russia under the tsars, the Soviets, and Vladimir Putin, where the rule has been sauve qui peut — each for him or herself.

Departing from Soviet patterns of behavior, in the late 1980s self-organized fitness emerged in the popular fronts of the three Baltic republics and in Ukraine. It has been the source of Ukrainian vitality in the continuing resistance to Russia’s invasions. From all walks of life, Ukrainians have left their former occupations to do whatever they can for the common cause. They have become more resilient, and fitter, under extreme duress.

Walter Clemens is a Professor Emeritus of Political Science, at Boston University, and an Associate, at Harvard University Davis Center for Russian and Eurasian Studies. His next book is ‘What Happened to Russia?’