The possibilities of space are almost limitless, but not if authoritarian states like Russia act without thought for humanity’s future. 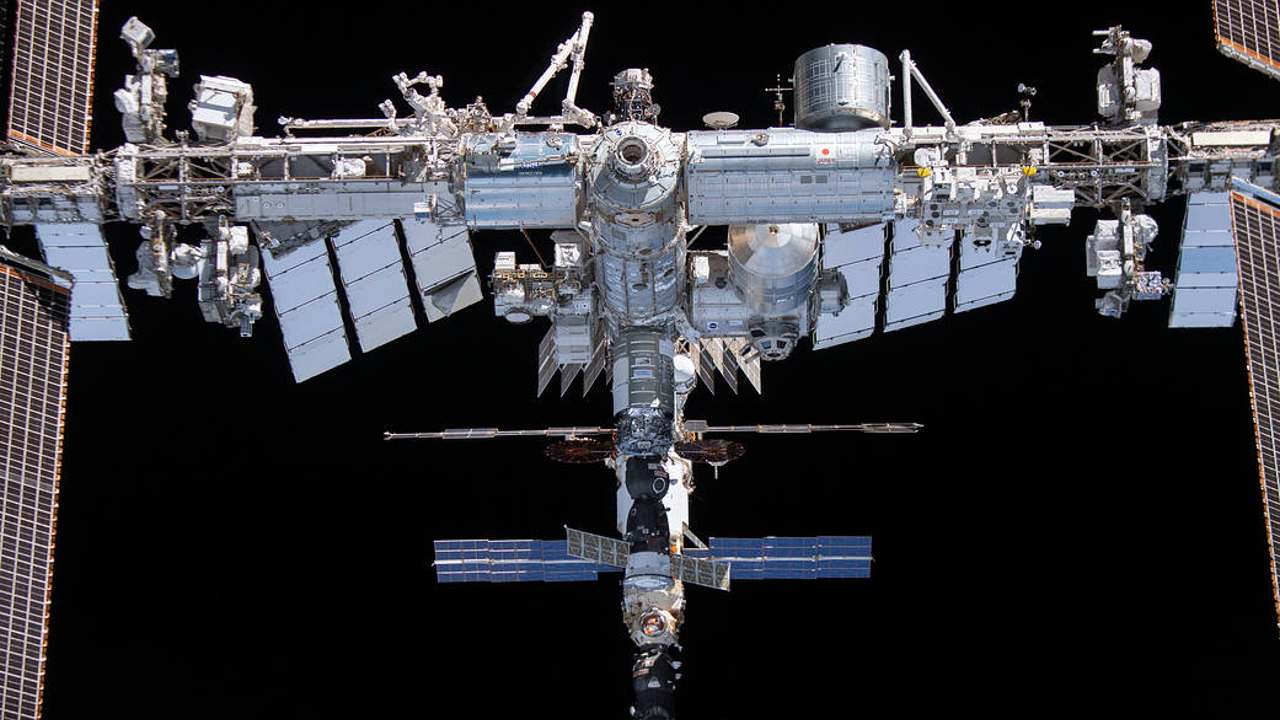 Photo: The International Space Station is pictured from the SpaceX Crew Dragon Endeavour during a fly-around of the orbiting lab that took place following its undocking from the Harmony module’s space-facing port on Nov. 8, 2021. Credit: NASA

Just like the roller-coaster nature of international progress on Earth, the very human proclivity to risk the promise of recent giant leaps in space has become worryingly clear. Just three days after I called on policymakers in these pages to take seriously the increasing security threat posed by the proliferation of space debris in low Earth orbit, Russian President Vladimir Putin’s Kremlin emphasized the point better than any analysis ever could.

On November 15, the world awakened to dramatic headlines that all seven personnel aboard the International Space Station (ISS) — four NASA astronauts, two Roscosmos cosmonauts, and one German astronaut of the European Space Agency (ESA) — were alerted to a space junk collision threat and had to be hurriedly directed into spacecraft docked with the ISS; the Russian Soyuz MS-19 and SpaceX Crew Dragon Endurance capsules.

While the ISS encounter with space debris was almost immediately confirmed by Roscosmos, Russia’s space agency, the cause of the event did not become clear until a few hours later. That’s when the US Department of State released a statement by Secretary Antony Blinken attributing the danger to the Russian Federation, which it stated, had “recklessly conducted a destructive test of a direct-ascent, anti-satellite missile against one of its own satellites.”

The statement went on to confirm that the anti-satellite test (ASAT) resulted in the immediate generation of “over 1,500 pieces of trackable orbital debris and will likely generate hundreds of thousands of pieces of smaller orbital debris,” adding that “this dangerous and irresponsible test will now threaten satellites and other space objects that are vital to all nations’ security, economic, and scientific interests for decades to come.”

Blinken’s statement was backed up by NASA Administrator Bill Nelson, who called the test “irresponsible and destabilizing.” US Space Command issued a detailed statement indicating that Russia’s test had targeted Kosmos 1408, a Soviet-era electronic and signals intelligence Tselina-D class satellite that had been launched from the Plesetsk cosmodrome in September 1982.

While Kosmos 1408 had ceased operations many years before the test, it had a mass of roughly 2,200 kilograms (4,850lbs), making it a “very large satellite” according to LEO labs — a commercial radar tracking service providing mapping of objects in low Earth orbit. In a report, LEO labs also highlighted that the Russian test was doubly irresponsible given not only the size of the target, but that its trajectory is in “a high inclination orbit, at an altitude that put it right in the middle of many other operational assets; notably, it was less than 100 km (62 miles) above the ISS, and less than 100 km below multiple commercial constellations including SpaceX’s Starlink fleet.” Parallel analysis of the subsequent growing space debris field was also presented by researchers at the Harvard-Smithsonian Center for Astrophysics.

Russia spent nearly a full day in silence before any official acknowledgment of the test. In the interim, Yuri Shvytkin, Deputy Committee on Defense Chairman of Russia’s Duma blithely called the State Department’s account untrue, claiming that “there is no limit to the State Department’s fantasies . . . Russia is not engaged in the militarization of outer space.”

Shvytkin’s denial didn’t last long. On 16 November, the Russian Ministry of Defense acknowledged that it had in fact “successfully conducted” the ASAT, with Russian Minister of Defense Sergei Shoigu astonishingly claiming that “the resulting fragments do not pose any threat to space activities” in spite of the event necessitating emergency evacuation drills for the ISS’ occupants just hours before. A separate press release by Roscosmos sheepishly underscored their own priority that “ensuring crew safety has always been and remains our top priority.”

This messaging dissonance between Russian government agencies seemed to confirm suppositions by space experts and Russia watchers that the Defense Ministry simply didn’t warn Roscosmos in advance. NASA Administrator Nelson suggested as much when he was quoted in the Washington Post speculating that Roscosmos chief Dmitry Rogozin likely didn’t “know a thing about this, and [this was] the Russian military doing their thing,” pointing out that a NASA delegation was in Moscow meeting with Roscosmos personnel at the time of the test, who Nelson believed would have been “just as appalled as we are.”

Conflicting statements aside, the action itself underscored Nelson’s point. Russia’s ASAT threatened Russian personnel, not only the space assets of Russia’s adversaries like the United States, or its self-proclaimed potential partners like China (the Chinese Tianhe space station module also sits in low Earth orbit.) The Atlantic’s terrific report on the incident — “Maybe don’t blow up satellites in space” — hit the nail on the head when its author Marina Koren asks readers “how do you tiptoe around the topic of one of your officemate’s bosses blowing a satellite to bits, with seemingly no regard for their safety — or yours?”

The incident suggests an alarming lack of coordination between Russian government agencies, which could lead to concerning national security developments elsewhere. Taken alone, the reckless test endangers international norms on the peaceful use of outer space. Of course, we were treated to screeds of whataboutism when Foreign Minister Sergei Lavrov dismissed U.S. concerns about the gravity of the test “that Russia poses risks to activities for the peaceful use of outer space is, to say the least, hypocrisy,” accusing the US of ignoring “proposals from Russia and China on arms regulation in space.” Unsurprisingly, those same proposals have been highlighted by experts as a “treaty trap” crafted to de facto legitimize many years of Russian and Chinese efforts to militarize space, while forbidding the technical development of US and allied systems.

Seen against the backdrop of Russia’s litany of other hostile acts against the transatlantic community this year, the ASAT test really underscores the growing tendency of Putin’s Kremlin to weaponize any and every field it engages in. This should be kept in mind as President Biden engages with Putin following his initial call earlier this month aiming to deter Russia’s threatened military intervention in Ukraine.

Furthermore, every day that passes without the establishment of well-defined norms for activities in space, not only threatens our security on the ground. but the potential long-term viability of operating in Earth’s orbit itself. It’s easy to imagine how actions disrupting government, military, or intelligence satellites could result in conflict here on Earth. But catastrophic economic and social impacts around the planet are also possible, since so much of our daily lives rely on commercial satellite operations. The targeting of such platforms — say those providing satellite navigation or communications services for a large population — could lead to widespread political instability in short order.

Moreover, the resulting fields of space debris created by orbital weapons can themselves endanger the lives of astronauts (as highlighted by the Russian ASAT incident), as well as unintentionally damage satellites of other nations, potentially leading to unintended responses from originally unrelated nation-states. And all of this might pale in comparison to the creation of space debris fields with the potential to make swaths of Earth’s orbit unusable for generations to come.

The international community will have to come together to work toward the norms needed to ensure the security of Earth’s near orbit, and fast. This is why Ambassador W. Robert Pearson and I have called on the Biden Administration (in a piece to be published in Foreign Policy this month) to announce a global Summit for Space Security in 2022.

The frontiers of space are increasingly open to non-professional astronauts, including billionaires and others — Michael Strahan, legendary defensive end for the New York (football) Giants reached the final frontier last week — who now journey beyond the Earth on commercial spacecraft. These inspirational flights have captured the public imagination, which now can conclude — at long last — that the promise of our shared space future is within reach. The international community must act quickly to ensure that promise is realized.

Dr. Benjamin L. Schmitt is a Postdoctoral Research Fellow at the Harvard-Smithsonian Center for Astrophysics, a Senior Fellow for Democratic Resilience at CEPA, and a “Rethinking Diplomacy” Fellow at the Duke University Center for International and Global Studies. (Twitter: @BLSchmitt)