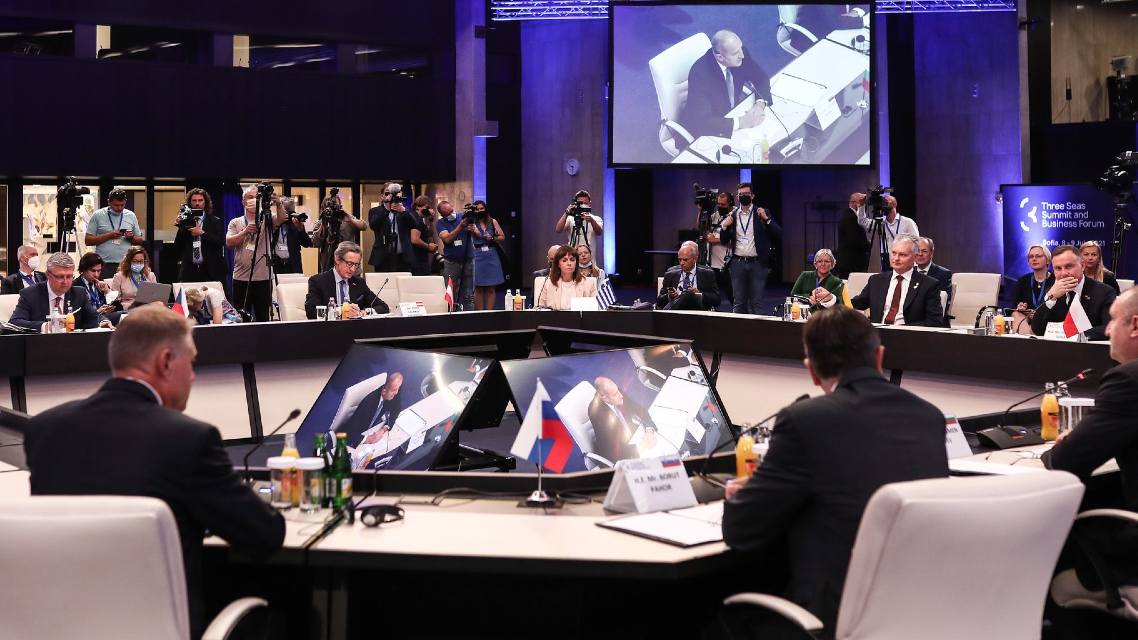 When President Joe Biden met NATO and EU leaders in Brussels in mid-June, he stressed the need to push back against Russian aggression, as well as against Chinese influence through its 5G technology and belt-and-road investments. Ahead of NATO’s next summit, the alliance is in fact updating its strategic concept to address these challenges.

But as NATO works on fleshing this out in 2022 or later, Central and Eastern European (CEE) nations are already taking practical steps that will advance these same objectives.

At their Three Seas Summit in Bulgaria on July 8-9, leaders of the 12 member states of the Three Seas Initiative (3SI) gathered to advance their own prosperity and security by investing in critical infrastructure projects that will link them more efficiently with each other, Western Europe, and the global economy. (Estonia, Latvia, Lithuania, Poland, the Czech Republic, Slovakia, Hungary, Slovenia, Croatia, Romania, and Bulgaria are members of NATO and the EU, while EU member Austria is not a member of the military alliance.)

One of the unfortunate legacies of some 40 to 50 years of Soviet occupation and domination of much of Central and Eastern Europe is an often creaking and crumbling infrastructure. Much is based on the needs of old empires — energy lines are mainly connected east toward Russia, while many railroad and road networks were built to suit the needs of the Austro-Hungarian and Ottoman empires. Now, CEE states need to connect to the West, where their economic markets are, and which (one day) military reinforcements may need to use. Some work has been done (like the Czech D5 and D8 highways to Germany), but the IMF estimates the region requires almost $600bn to meet its needs.

The Three Seas Initiative aims both to modernize and to globally connect the infrastructure of these Central and East European nations, which includes not just roads, rails, and ports, but also digital architecture and sustainable energy.

The initiative operates on a model of public-private partnerships, where governments commit funds to a shared Three Seas investment fund, whose resources are in turn leveraged to encourage even larger private sector investments into concrete, “bankable” projects. Thus far, nine of the 12 Three Seas participating states have invested almost $1.2bn in the fund, with a target of $3.6bn to $6bn.

From the structure of the initiative itself, it is clear that the Three Seas Initiative is a practical, tangible way for democratic, market-driven societies to compete effectively against the wave of technology and investment coming from China, as well as ongoing military aggression from Russia. Instead of fine rhetoric, the Three Seas Initiative represents “rubber hitting the road” when it comes to advancing the Biden Administration’s stated priorities of pushing back on Russia and China.

U.S. support is therefore not only logical as a continuation of existing policy — it is urgent. The initiative was conceived largely by U.S. strategic thinkers (hat tip: Ian Brzezinski of the Atlantic Council) to the consternation of many in Germany and the EU more broadly, who found the U.S. meddling with Europe’s commercial relations with China and Germany to be a nuisance.

That annoyance was compounded because it was the Trump Administration that provided staunch U.S. support, including by pledging a $300m capital contribution from the Development Finance Corporation to the Three Seas investment fund – a substantial infusion that could convince others, such as Germany, to invest as well.

The Biden Administration has likewise given strong rhetorical support to the Three Seas Initiative, evidenced by the video messages presented by President Biden himself and Secretary of State Blinken. Up in the air, however, is what becomes of the U.S. capital infusion pledge.

While the U.S. political rhetoric is strong, the DFC has thus far only offered to provide up to $300m in loans for 3SI projects, rather than a capital contribution. Whereas other states are putting up funding on an equity basis, expecting a return on investment, the U.S. is insisting on a method by which the U.S. is paid interest. This adds only more consternation from participating states, Germany, and the EU alike.

Given the strong support from the highest levels of the Biden Administration, U.S. implementation of its support for the Three Seas Initiative needs to be better.

The United States should take the lead in engaging Germany and the EU more broadly to become major supporters of the initiative, alongside the United States. Germany has a far greater financial interest in the success of Central and Eastern European countries than it does in one-off business deals with Russia or China.

The Bulgaria summit was promising — reflecting several years of commitment to the initiative at the highest levels of government in Central and Eastern Europe. It is a real-world way to execute the goals espoused by the United States at the recent NATO and U.S.-EU Summit meetings. The United States should commit fully to the initiative — including with real funding — both to advance America’s own interests and to ensure the success of the initiative overall.