The West Should Raise the Price of Putin’s Belarus Plaything

Russian politics may seem mad at times, but when it comes to money it is surprisingly pragmatic 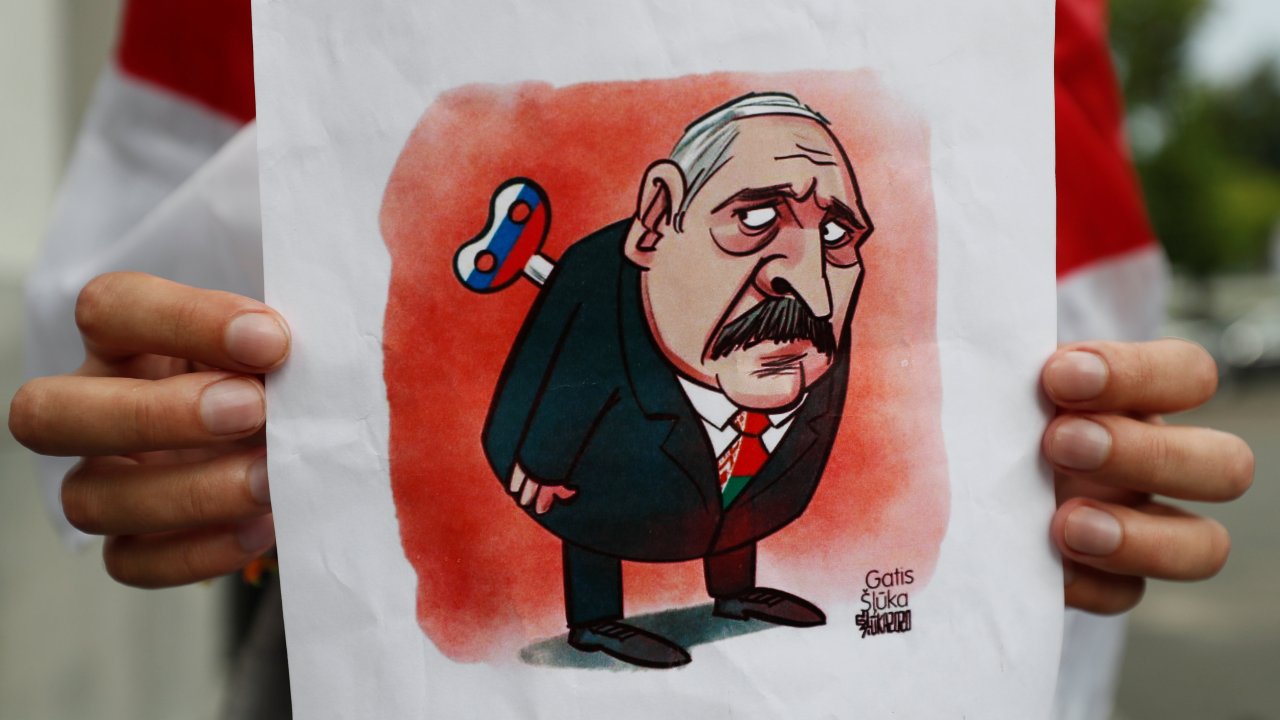 Photo: An activist holds up an artwork depicting Belarusian President Aleksander Lukashenko as they attend a rally in support of the Belarusian anti-government movement and detained blogger Roman Protasevich, in front of the Ministry of Foreign affairs in Kyiv, Ukraine May 28, 2021. Credit: REUTERS/Gleb Garanich

In August 2020 when hundreds of thousands of Belarusians took to the streets in protest against a stolen election and police brutality, it seemed to many this was the end of Lukashenka’s 27-year long rule. But, as so often, Russia once again came to his rescue. Not only did the Kremlin give Lukashenka $1.5bn to prop up the economy and strengthen the security apparatus, it even sent a pool of Russia Today journalists to Belarus when Lukashenka’s regime propagandists went on strike.

Russia’s firm support combined with the West’s toothless “wait and see” approach, allowed Lukashenka to launch a wave of repression on a scale perhaps unseen in Europe since the war in Yugoslavia. Over 30,000 Belarusians were arrested, thousands were tortured, hundreds were recognized as political prisoners and several died. Belarus’s deputy minister of the interior openly declared that the most vocal opposition supporters should be killed, while the rest should be placed in concentration camps. One concentration camp was even created – outside the city of Slutsk in the Minsk region. In its official statements, the Interior Ministry no longer calls the opposition supporters people anymore, using pejorative terms instead. In the last nine months, Belarus has effectively turned if not into North Korea, then into another Donbas or Somalia — a violent rogue state with no concept of law.

Throughout this period, the European Union (EU) showed very little interest in resolving or engaging in the Belarusian crisis. That situation only changed on 23 May when the Belarusian regime effectively hijacked a Ryanair plane and forced it to land in Minsk to arrest a passenger — Raman Pratasevich, a prominent opposition journalist and activist. Overnight Lukashenka’s domestic terror became a burning international issue and a serious test for the EU’s foreign policy.

There is a group of observers, some quite influential, in the West who repeat like a mantra that sanctions against Belarus will make the country even more dependent on Russia. At first glance this makes sense, but only as long as you know nothing about Lukashenka’s personality and the last 25 years of Belarusian history. Lukashenka has a psychopathic lust for power. He repeatedly promised political and economic reforms to the West and deeper integration to Russia, but when it came to keeping his promises, he always retreated. Because both reforms and deeper integration would put an end to his absolute power over Belarus.

Despite the fact that over the past two decades Lukashenka has deceived both Russia and the West dozens of times, neither the former nor the latter have made any serious efforts to change the Belarusian status quo. For the West, Lukashenka’s domestic antics have never been an important issue. For Russia, supporting its stroppy ally comes at a relatively cheap price. And while it seems that for the West the proverbial last straw was the Ryanair incident, through a belated recognition of Lukashenka’s domestic terrorism; Russia’s last straw will most likely be a dramatic rise in the cost of project Lukashenka.

It is crucial to understand one thing: it is impossible to get rid of Lukashenka without Russia. But that is not the dead-end it might appear — we can push Russia to reconsider its stance on Lukashenka by making him too expensive a toy for the Kremlin.

And that’s where sanctions come into play. Not a laughable visa ban against a handful of officials who never traveled to the EU in the first place, but serious economic sanctions with real and immediate effect. First of all, a complete ban on the export of Belarusian petrochemicals and potash fertilizers to the EU. These two sectors are Belarus’s main sources of foreign currency. If sanctions are imposed, the upkeep of Lukashenka’s regime will cost Russia not $1.5-2bn a year, but a much more substantial $5-6bn.

In addition, the sanctions should directly affect the interests of Russian businesses in Belarus. It is critically important to impose sanctions on the Gazprom-owned Yamal-Europe gas pipeline which runs through Belarus. Given Gazprom’s key role in Russia’s politics, sanctions against its Belarusian pipeline send a clear signal to Russia that the Belarusian issue is urgent.

This could also provide a solution to the US-Germany dispute over Nord Stream 2 (NS2.) While Germany is interested in direct gas supplies from Russia without “troublesome” transit countries, the U.S. strongly opposes increasing European dependence on Russian energy supplies. Imposing sanctions would allow Germany to finally complete the NS2 project and receive gas directly from Russia. It would also maintain Ukraine’s status as a gas transit country, while the overall gas supplies from Russia to Europe will stay at the same level, which should work for the U.S.

Russian politics may seem mad at times, but when it comes to money it is surprisingly pragmatic. In terms of upkeep costs, Belarus under real sanctions is Donbas + Transnistria + Abkhazia + Ossetia multiplied by five. The moment Lukashenka becomes too expensive for the Kremlin, the Russian ruling class would solve the Belarusian crisis with a speed and effectiveness that Germany, the EU, and the U.S. would never be able to match.