The View From Estonia

Shared Knowledge and Trust Are Increasingly Two Casualties of the Crisis Knowledge is strength. But that is what Estonians—in a state of emergency until at least May 1—lack. Estonians are disciplined. We follow the government rules and recommendations, use self-isolation, quarantine, and minimize social interaction. Streets and shops are empty, theaters, cinemas, gyms, spas, schools, […]

Shared Knowledge and Trust Are Increasingly Two Casualties of the Crisis

Knowledge is strength. But that is what Estonians—in a state of emergency until at least May 1—lack. Estonians are disciplined. We follow the government rules and recommendations, use self-isolation, quarantine, and minimize social interaction. Streets and shops are empty, theaters, cinemas, gyms, spas, schools, and universities are locked. We try to keep our distance even in the overcrowded parks and forests near towns.

The immediate practical problem is testing. Supplies are short and since March 20, conditions are tight. In order to be tested, you must not only show severe symptoms but also be either over 60; have a severe chronic qualifying disease; or be a health-care worker, police officer, or frontline worker. The official figure of 352 people with COVID-19 (as of March 23) is not only misleading; it is wrong. The lack of data makes it hard for us to make rational decisions and leads to several unwelcome tendencies:

More broadly, the current situation reminds us of a saying by our first post-1991 president Lennart Meri: the sea connects neighbours, land divides them. Poland’s unexpected and poorly communicated decision to close its borders trapped hundreds, if not thousands of homebound Baltic citizens on the German-Polish border. Media images of the resulting lines of vehicles stretching for kilometres revived painful memories of the early 1990s. In those days travellers from the Baltic states to the rest of Europe faced two or three days of waiting on the Lithuanian-Polish border, plus the unpleasant attention of corrupt border guards, customs officials, and police. An initial Polish offer to enable private cars to travel through Poland in convoys was rescinded.

The solution came by sea. The Tallink operated ferry Romantika hurried to the German port of Sassnitz to rescue Estonian, Latvian, and Lithuanian citizens. Many of them, including groups with elderly people, small children, and pets, had spent days and nights in their cars. The Romantika docked in Riga on the night of March 19, with 472 passengers and 152 cars. The full impact remains to be seen, but the story is a hard blow to mutual trust. The Estonian government had long advertised Poland as Estonian’s primary like-minded EU partner and close ally. For now, the main routes westwards for Baltic people and goods are by sea.

Maybe the first lesson from all this is the fragility of the upper layer of solidarity, civilization, and common values in the face of a crisis that does not recognize borders. It is now high time for the EU to take the lead and handle the problem, otherwise the messaging from China and Russia will prevail. This does not mean only (and not even primarily) economic regulations and mechanisms. If solidarity, common values, and unity are to carry the same meaning in a new reality we are entering, then action is needed now. Otherwise, once the dust settles after the crisis, we may find that these terms do not exist or have an entirely different meaning.

Eeva Eek-Pajuste is Director of the Lennart Meri Conference at the International Centre for Defence and Security.

Photo: View of Tallinn by Sarari1123 via Pixabay. 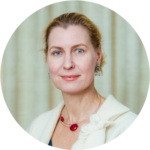