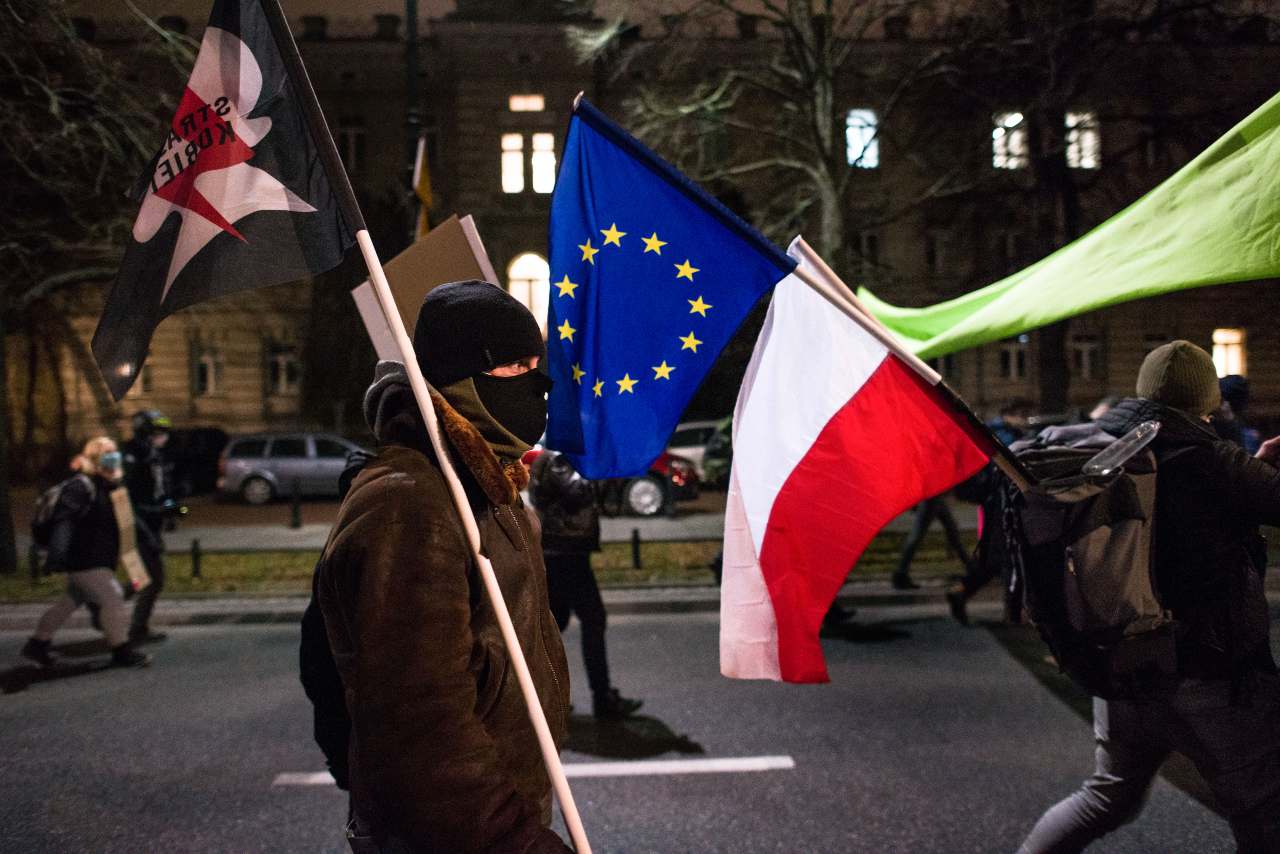 Photo: A protester walks with the Polish and the EU flag tied together during the demonstration. Under the slogan "A Walk for Future'' (Spacer dla Przyszlosci) hundreds of students gathered at the Chancellery demanding the resignation of Prime Minister, Przemyslaw Czarnek from the ruling Law and Justice (PiS) party as the minister of education and science, whom they described as "a homophobic minister proclaiming controversial views." The Women's Strike (Strajk Kobiet) and the Youth Strike for Climate (MSK) also joined the educational strike. Credit: Attila Husejnow / SOPA Images/Sipa USA

Poland’s government is under fire again, accused by its critics of inching the country closer to a populist authoritarian system. While previous controversies centered on judicial reforms and a high court ruling restricting access to abortion, the latest episode concerns the media, which the United Right coalition led by the Law and Justice (PiS) party has vowed to “re-nationalize.”

The government has moved energetically to reduce foreign ownership of Polish outlets. (The country’s largest state-controlled oil refiner PKN Orlen has repurchased 170 regional media titles from the German Verlagsgruppe Passau.) The latest push is a proposed law that would increase taxes on television commercials – a move branded by the opposition as a thinly-veiled effort to drive out of business privately-owned stations, especially TVN and Polsat, on account of their persistent criticism of PiS. In response to the proposed tax, on February 10th dozens of Polish media outlets suspended reporting, blacking out their pages and screens and declaring a “day with no media” to drive home the point that the policy’s real goal is to silence them.

Many see the tax as an attempt to eliminate outlets unfriendly to PiS, noting that the state-funded TVP is no longer a public television conglomerate but a propaganda mouthpiece for the government. For such critics, PiS’s “re-nationalization” of the media is part and parcel of the illiberal centralization of the state underway since 2015. By buying out foreign owners and increasing taxes PiS is replicating its stranglehold over TVP on a national scale, in the process reducing access to sources of information critical of the government.

Supporters of the policy point out that because of the way privatization proceeded after the collapse of communism, the overwhelming majority of Polish media remains in foreign hands, with, for instance, 75 percent of all Polish newspapers owned by German conglomerates as of 2016. According to this view, the government is merely acting to correct the imbalance. By emphasizing the German ownership of a large sector of Polish media, the government has also sought to tap lingering anti-German sentiment among older generations of Poles while arguing for an irreducible link between national sovereignty over the country’s key strategic assets, including the media, and the preservation of Polish independence.

Though the question of state ownership of the media will impact Polish politics for the foreseeable future, the issue goes deeper than jousting between the government and the opposition (and even this binary is far from neat – for example, one of PiS’s coalition partners, Jarosław Gowin’s “Agreement” party, opposes the tax). The fight over the media has exposed a more profound cleavage, namely two competing visions of the “rules of the road” for Polish democracy.

PiS leader Jarosław Kaczyński and his entourage not only believe that the country’s post-communist transformation was hijacked by former communists and their liberal allies, which allowed the old nomenklatura to transition to new positions of power, but that the country’s disrupted 20th century and legacy of subjugation have hampered its capacity to enjoy fully the fruits of its sovereignty. Poland’s history of underdevelopment as a conquered nation, the thinking goes, necessitates extraordinary measures. This is the “catch up at any cost” school. Its members believe the country has earned the right to maximize its sovereignty. The centralization of power and control by the government when exercised for the benefit of the nation is not seen as the state’s undue intrusion into the private sector, but rather as a means of reaping the hard-won fruits of independence and asserting Polish values, with the media a vehicle to transmit these traditions to the next generation.

The other school rejects the proposition that Poland’s history of suffering at the hands of foreign occupiers entitle its leaders to deviate from the liberal democratic script, no matter the alleged national interests at stake. In short, this is a divide about the degree to which historical injustice allows one to “bend the rules.” It is also about the shape of the Polish political system going forward, and whether institutions founded on liberal democratic norms can be altered to reflect a country’s historical experience and distinct proclivities, or if charting a “Polish path” risks a slide into authoritarianism.

It is too early to assess whether, and if so at what point, the Polish public will reject this latest drive to render “fully Polish” the country’s post-communist institutions by asserting more control over the media. There are clearly generational and geographical differences at play, with younger Poles raised in urban areas more opposed to the state encroaching in areas of economic and social activity, including the media, and the conservative-leaning electorate in rural Poland more accepting of the government’s policy. Regardless of how it plays out, PiS’s drive to “re-nationalize” the media is symptomatic of a larger struggle over the future of Polish democracy, and what measures comport with – or imperil – Poland’s status as both a sovereign and a democratic country.