The Kremlin pretends that strong personal relationships are a mark of Russia’s president. That’s not really true. 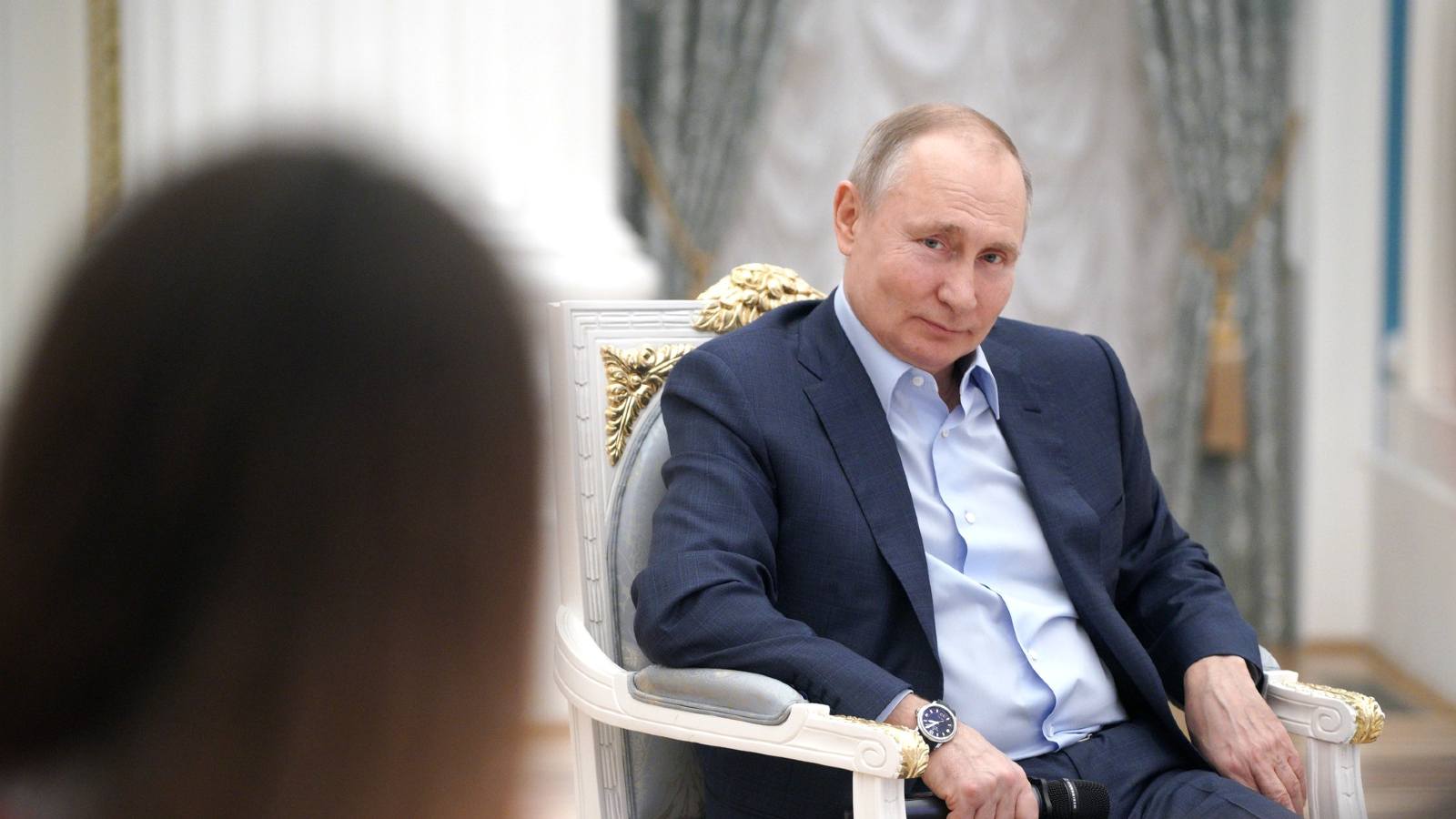 All Bluff? Russia’s Nuclear Threats Russia’s Militarization of the Black Sea: Implications for the United States and NATO After Putin Russian Power Wanes in the Borderlands Putin’s Options Dwindle Despite ‘Coffin Money’ The Bewilderment of Kremlin Propagandists Time to Confront Russia’s Nuclear Recklessness in Ukraine
Explore

When Volodymyr Zelenskyy broke the news on April 13 that Viktor Medvedchuk, Putin’s favorite Ukrainian oligarch, politician and ally — the man who some saw as the head of a future Ukrainian puppet regime — had been arrested by Ukrainian counterintelligence, the question emerged what Putin would do about it.

Zelenskyy immediately offered to swap him for Ukrainian prisoners of war. The response from Putin’s spokesperson, Dmitry Peskov, was not very encouraging: “Medvedchuk is not a Russian citizen and has nothing to do with the special military operation [in Ukraine],” and added, “We are not at all sure that he wants Russia’s involvement in resolving this situation he faces.”

After that, Medvedchuk’s wife — who fled Ukraine before the invasion — had no choice but to address the presidents of Ukraine and Turkey with her plea to release his husband, since there was no assistance on offer from Russia’s president, at least publicly.

This is a surprise and offers a new glimpse into the outlook of Vladimir Putin.

Loyalty to friends and allies was always an important part of the Kremlin’s foreign policy narrative. It was never a secret that Putin’s old German friends from his KGB time in East Germany were given profitable positions in Kremlin’s-controlled corporations. Just like the Lannisters in Game of Thrones, he always paid his debts.

Nor did the Kremlin ever hide that Putin’s allies, those presidents and premiers unseated by ungrateful, Western-manipulated masses were always welcome in Russia. Putin thereby became a collector of prominent politicians in exile, including Viktor Yanukovich, former president of Ukraine, and Askar Akaev, a former president of Kyrgyzstan. And that is why journalists spent years trying to locate Syrian President Bashar al-Assad’s property in Moscow — nobody ever questioned that Putin would give him asylum if his regime fell. (in 2019, 19 Moscow apartments were identified as probably belonging  to Assad’s extended family.)

In fact, it was such a well-known element of Kremlin strategy, that Putin even tried to use it against Ukrainian politicians as a way of compromising them before the Ukrainian public: just a few weeks before the war started, Putin offered asylum to Petr Poroshenko, a predecessor to Zelenskyy, who had found himself in legal trouble in Ukraine (Poroshenko immediately refused the offer and stayed in Kyiv.)

Putin and Medvedchuk’s intimate relationship is well-known and well-documented. Ten years before the annexation of Crimea, Putin honored Medvedchuk by becoming a godfather to his daughter. For the Russian president that meant he had invested his personal prestige in a second-rate Ukrainian politician, a debt that Medvedchuk was expected to repay.

Over the years, Putin maintained support for Medvedchuk: in 2009 he wrote an essay about his ally, praising him as “a real Ukrainian patriot” and as one of the “most ardent supporters of the development and strengthening of Russian-Ukrainian relations.”

Their relationship became closer over the years — in 2012 Putin visited the Medvedchuk’s luxury dacha in Crimea. To many, that looked like a mafia boss vacationing with a trusted member of his gang. Putin kissed his goddaughter and took her in his arms, he and Medvedchuk’s family sat at a round table in front of a gigantic fountain, as an unofficial anthem of Leningrad, Putin’s birthplace, was played. The boss was visibly pleased.

Vladimir Putin also cared about Medvedchuk’s family, just as he did for his friends in Russia – a Medvedchuk relative was given positions in several companies in Igor Sechin’s Rosneft empire. Before the war, Medvedchuk was seen as the most important Putin’s political ally in Ukraine; the main reason why Zelenskyy placed him under house arrest from May 2021.

So why has Putin now left his old friend to swing in the wind, why hasn’t he rushed to save “his guy”?

Putting aside all the propaganda about Putin’s unwavering loyalty to friends, there are, in fact, examples of Putin attacking “his people,” especially when he feels vulnerable or threatened.

In the summer of 2012, then-Prime Minister Putin was in a vengeful mood following months of protests in Moscow, believing it was a threat to his return to the Kremlin as president. Yet he won the presidency in May and set about taking revenge. On June 12, 2012, the police raided the apartment of Ksenia Sobchak, a celebrity who had sided with the protesters and went to anti-Putin rallies. Sobchak’s father, the mayor of St Petersburg, had hired Putin when he left the KGB, and made him his deputy – the two families became close, and Putin was present at Ksenia’s christening. Later, Sobchak had exploited her closeness to Putin to build her celebrity career on Russian TV and Putin tolerated that until she joined protesters, who were paid, Putin believed, by the West. This amounted to treason in Putin’s book.

The way the police conducted the raid was intended to be humiliating – it was early morning, and Sobchak opened the door to police almost naked, only in her underwear. Police refused to let her get dressed for several hours and mocked her, making unpleasant and personal comments. Few doubted the orders came directly from Putin. Sobchak learned her lesson — ultimately continuing a lucrative TV and advertising career — while Putin got his revenge.

Yet it was a domestic issue, not meant for international consumption.

Medvedchuk, on the other hand, is a Ukrainian Putin’s proxy, and the entire world is watching to see how Putin might help his friend.

But as with many other elements in Putin’s big plan for the invasion of Ukraine, Medvedchuk failed him: the once-powerful pro-Moscow political opposition in Ukraine is non-existent. Even former pro-Russian loyalists have donned camouflage and taken a gun to fight the invader.

Confronted once again with the consequences of his own failure, Russia’s president is once more in a vengeful mood. He has purged the FSB branch responsible for fostering vast networks of supporters in Ukraine. Generals who promised swift success have been removed. Medvedchuk, the possible puppet-in-chief of a Quisling Ukraine has apparently fallen into that same category of people who failed the boss.

And here is a problem: Vladimir Putin became so obsessed with Ukraine, that he treats it as a domestic issue. Medvedchuk failed to deliver, and now he is to face the consequences – that seems to be Putin’s message.

But it is worth remembering that to almost the whole world, Ukraine is a separate country. And that for other would-be friends of Putin’s Russia, Medvedchuk’s plight may one day mirror their own conundrum. What message is the Kremlin’s top man sending to other politicians about the real value and staying power of Russian support?