The Empires Strike Back: A New Age of Imperialism

Russia and its friends are working hard to resurrect and build empires at the expense of its neighbors. The West must recognize the dangers of this global trend. 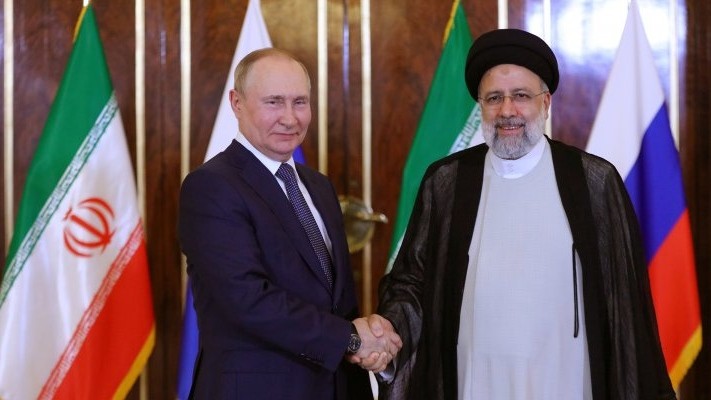 Photo: Meeting of the Presidents of Iran and Russia. Credit: Government of the Islamic Republic of Iran Website.

As Russian troops continue their war in Ukraine, their desire to take and hold territory, to expel Ukrainians, to eradicate a Ukrainian identity, and to reestablish formal political and administrative control is striking.

Their actions recall the words of the then US Secretary of State John Kerry during the 2014 crisis over Crimea: “You just don’t in the 21st century behave in 19th century fashion by invading another country.” Kerry’s comment was meant to highlight Russia’s apparently anachronistic behavior as a way to isolate it politically. From the perspective of 2022, we see not only an altered geopolitical landscape and an undermined liberal international order, but a return to the familiar patterns of imperialism that dominated world politics for centuries.

Furthermore, Russian imperialists are not alone. A group of neo-imperialist nations including Turkey, Iran, and China, are gravitating toward Russia, supporting its war effort, and grabbing influence for themselves.

On paper, these nations appear to make a strange team, but they share — to a greater or lesser extent — an aversion to liberal values, democratic governance, and the post-1945 respect for state sovereignty. They are all eager, in their various ways, to expand their influence at the expense of their neighbors. They wish to overturn what they consider to be a recent history of decline and humiliation at the hands of outsiders. They work to undermine not only the autonomy and sovereignty of their neighbors, but their identity and their right to exist as unique, independent identities. They are not shy about using military power in pursuit of these goals. And all four countries also share a romanticized sense of their own glorious history in which they once reigned as a great imperial power, spread civilization, and suffered aggression at the hands of their neighbors.

Turkey represents a curious case, because alone among the four countries identified, it is closely linked to the West and to the post-1945 system. It joined the Council of Europe in 1950 and became a formal American ally and NATO member in 1952. In 1964, it became an associate member of the European Economic Community. In 1999, Turkey was recognized as a candidate for membership in the European Union.

At the start of this century, the rise of the AK Party, led to debates about Turkish “neo-Ottomanism.” Since the Ottoman Empire was a precise historical phenomenon, drawing exact parallels with the present regime is inherently problematic. Nevertheless, Turkey’s record over the past 20 years has a distinctly imperialist feel. It has eagerly involved itself in the politics in North Africa. It has invaded and occupied part of Syria. It carried out military operations in Iraq and maintains a growing military presence there. It challenges Greek sovereignty, the terms of the Lausanne treaty, and regularly violates Greek airspace. President Tayyip Erdoğan openly supports the doctrine of the Blue Homeland (Mavi vatan)—which aims at dominance in the Eastern Mediterranean. Turkey has collaborated with Azerbaijan for the diminution of Armenia. It maintains an occupation force of 35,000 troops on the island of Cyprus, and has used its military presence there to colonize the northern third of the island since 1974. Turkey has even raised its profile in the Balkans. All these actions are evidence of a renewed brand of Turkish imperialism.

Iran, too, is undergoing an imperial revival. Thanks largely to American missteps in the region, Iran now has a stranglehold on power in parts of Iraq. It controls key elements of Lebanese politics through Hezbollah, parts of Yemen through the Houthis, and exerts a powerful influence in Syria after helping Bashar al-Assad retain power in the Syrian Civil War. Former President Mahmoud Ahmadinejad evoked the Persian Empire of Cyrus the Great in a Twitter dispute with President Trump in 2019. A few years before, Iranians created Cyrus the Great Day to further honor the memory of the founder of Achaemenid Persia.

In its foreign policy, Iran aims at restoring imperial glory in one form or another. Its regional contest for hegemony with Saudi Arabia, its open threats against Israel, and its pursuit of nuclear weapons are all destabilizing for the region and underpin the importance for the US of resuscitating the Joint Comprehensive Plan of Action.

China is also flexing its imperialist muscle. Restoring China’s historical imperial borders is familiar territory for the country’s Communist Party. In 1950, after defeating the Nationalists during the Civil War, China invaded and occupied Tibet. In 1979, it attacked Vietnam in an attempt to support its client, the Khmer Rouge regime in Cambodia. It reclaimed Hong Kong from the British in 1997 and during the past few years has slowly been grinding away the democratic elements of its government, casting aside its treaty commitments in the UK-China Joint Declaration. Over the past few years, Chinese imperialism has once again been on the march. It is waging a genocidal campaign of repression against its Uighur population in the western part of its empire, engaged in brutal fighting with India in 2020 to secure land in the Himalayas, and has created a chain of heavily militarized islands in the waters of the South China Sea, disregarding an international court ruling on the issue. And, of course, there has been renewed talk and military maneuvers signaling a potential takeover of Taiwan.

All this leads us back to Russia, the world’s largest country and once its largest empire. Putin’s famous lament about the collapse of the Soviet Union was not only about balancing an unchecked American hegemon, it also signaled a longing for Russian greatness and for empire. Imperial rhetoric is widespread in Putin’s Russia as scholars, most notably Timothy Snyder, have pointed out. Even during the funeral of his daughter, the Russian imperialist Aleksandr Dugin claimed that she had died for the Russian “empire.” As Snyder convincingly argues, Russia’s war in Ukraine is colonial. It is imperial. It is designed to conquer, to subjugate, and to destroy the Ukrainian identity. Russia’s actions are toxic not only for Ukraine, but for Poland, Lithuania, Estonia, and Latvia. They have dangerous consequences for Europe and the entire NATO alliance.

As policymakers across the world craft their responses, they should understand both the imperial nature of the challenges facing them and the developing collaboration among those imperial powers. These kindred regimes have gravitated toward each other, providing support for their respective imperial projects. Leaning on the rhetoric of a “new era” Xi Jinping and Vladimir Putin famously announced a “friendship” with “no limits.” It was no accident that this announcement came less than three weeks before the invasion of Ukraine. There is a history, after all, of imperial powers colluding before launching aggressive wars, as we should recall, near as we are to the August 23 anniversary of the Molotov-Ribbentrop Pact.

At the start of 2022, Russia, Iran, and China conducted joint naval drills. President Putin recently visited Iran to solidify relations. In July, there was a trilateral summit with Russia, Iran, and Turkey, meant to signal that Russia was not entirely isolated politically. But there was a broader signal too — that these nations, with their imperial agendas, are ready to support each other and to push back against Western attempts to isolate and contain them.

These developments should be a cause for concern in the United States and across the Western alliance, from London and Paris to Berlin, Tokyo, and Canberra. The United States and its allies may come closer to success in these various efforts at containment if there is a recognition that the enemies of today represent an unwelcome resurrection of the imperial ideas of an earlier era. Like the imperial states of the past, they will cooperate with each other in order to achieve their goals. They are inspired by their own (twisted) sense of their history and by their own imperial dreams.

In that sense, we are once more in a world of empires, where the strong attack the weak at will, where power determines borders, and where those who stand on principle must stand together or fall apart.

Andrew R. Novo is a Nonresident Senior Fellow with CEPA’s Transatlantic Defense and Security program. He is a Professor of Strategic Studies at the National Defense University, Washington, DC, and an adjunct at Georgetown University’s School of Foreign Service.