As Armenia and Azerbaijan near a peace treaty, Russia is increasingly distanced from the region. 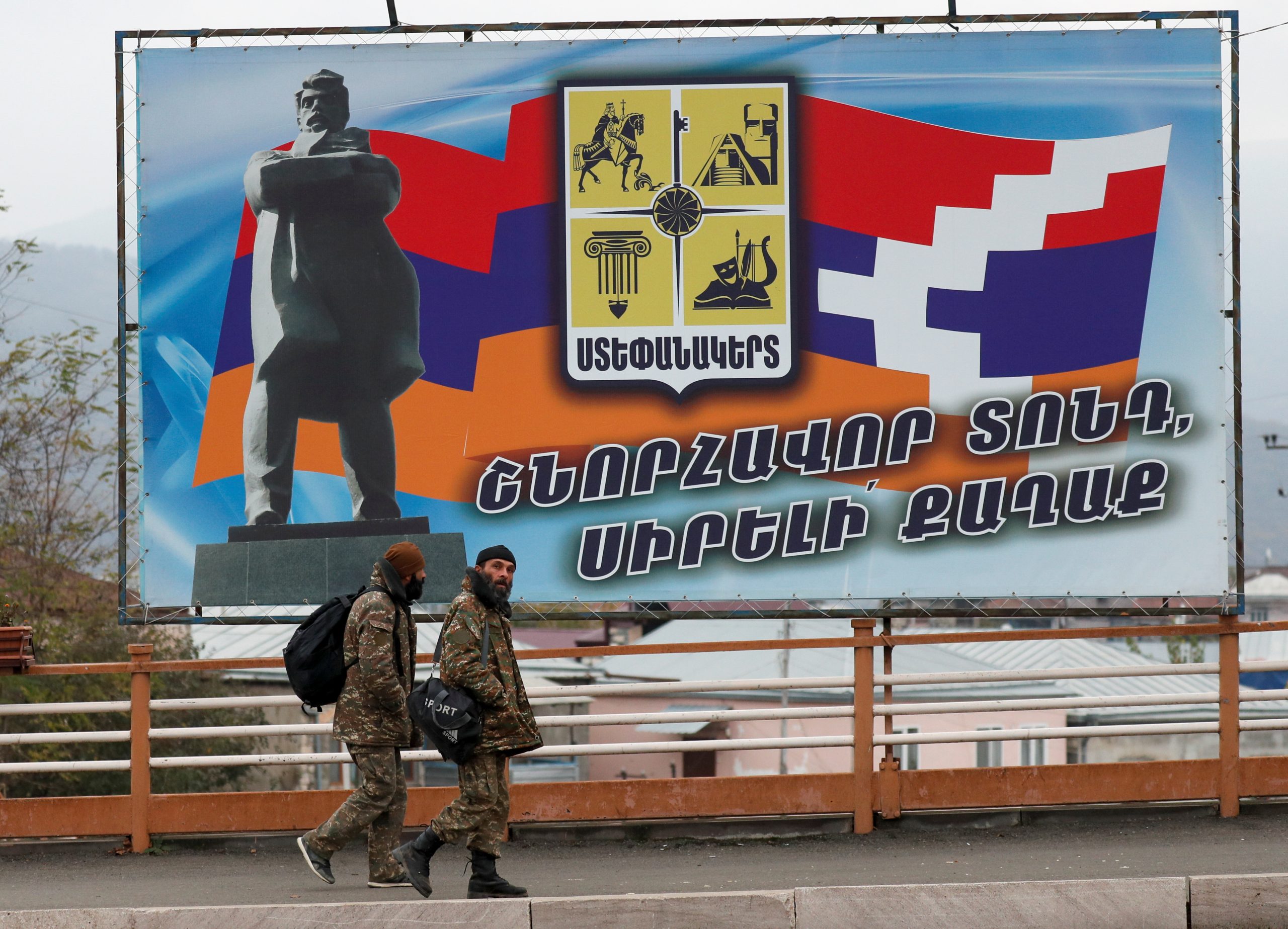 Photo: Men walk along a street in Stepanakert in the region of Nagorno-Karabakh, November 16, 2020. Credit: REUTERS/Stringer

Armenia and Azerbaijan seem to be inching toward a comprehensive peace deal by the year-end. The hints in the media have been circulating for months, with various representatives from the Armenian leadership signaling a high probability of progress on the peace deal.

In the latest statements, the Armenian side was unequivocal. Armen Grigoryan, Secretary of the Security Council, said that Armenia and Azerbaijan had agreed to sign the peace deal by the end of December. A long-disputed border dispute may also be resolved in the coming months.

Simultaneously, similar positive noises emerged from Azerbaijan’s key ally, Turkey. The country’s foreign minister announced that Azerbaijan and Armenia have already reached an agreement on the principal points of a peace treaty. And remember, this all comes just a month after the two sides engaged in heavy clashes, and less than two years since Azerbaijan won the 2020 war over Nagorno-Karabakh.

Exactly what the treaty will include is not yet clear, but based on recent statements from the two capitals, it seems likely to include mutual territorial recognition, a major achievement. This will effectively mean that Armenia will recognize Nagorno-Karabakh as part of Azerbaijan’s territories. In return, it will hope to get special language and other cultural rights for ethnic Armenians living in the enclave.

This seemingly unexpected development is, in fact, a result of months-long diplomatic efforts spearheaded by the West. Since the war in Ukraine, the US has actively re-engaged the South Caucasus and delivered progress in Armenia-Azerbaijan talks has received attention in Washington. Just recently, US Secretary of State Antony Blinken spoke with Azeri President Ilham Aliyev and Armenian Prime Minister Nikol Pashinian in separate talks on October 11, emphasizing the need for peace and hailing practical steps toward an agreement.

More importantly, the European Union (EU) has significantly upped its game in the region following Russia’s aggression in Ukraine, and now seeks to push back against the Kremlin’s self-interested “peacebuilding” efforts, including its military buffer force between the two sides. France, always supportive of Armenia, has been especially active in calling for an agreement. In a recent statement, President Emmanuel Macron accused Russia of purposefully instigating instability between Armenia and Azerbaijan.

Russia is obviously unhappy. While most of its attention is focused on conquering Ukrainian territory, the war has caused a serious decline in Russian influence; the South Caucasus are a good example. Overstretched militarily, Russia in unable to control the ripple effects, with local actors now seeing opportunities for a more active foreign policy. Azerbaijan has used a more coercive approach toward Armenia, while the latter turned to India for large military equipment purchases. Turkey has emerged as a significant winner, pushing for its own rapprochement with Armenia, while the latter has questioned Russia’s treaty commitment to its defense.

The vacuum in the South Caucasus is real and the West has much to gain if it uses the opportunity. In early October, the EU agreed to send a special mission to the border of the two countries. It is not certain what the mission might accomplish in practical terms, beyond building confidence and perhaps even facilitating border delimitation process, but the move is notable anyway because it signifies a shift from Russian- to EU-mediated efforts. Indeed, over the course of this year all summits of Armenian and Azerbaijani heads of states were held exclusively under EU auspices. Prisoner of war exchanges were also mostly the result of American, European or Georgian mediation.

Russia has been absent. This worries the Kremlin, but can do little more than make angry statements from the sidelines; Russian Foreign Ministry’s spokesperson Maria Zakharova recently commented that the EU is trying to undermine Moscow’s efforts to help.

So this may now mark the start of a new era, with the end of the so-called post-Soviet period and Russia’s notion of regional hegemony. A peace deal will also, of course, remove the need for Russian peacekeeping troops on Azeri soil once the current agreement expires in 2025.

Yet, a deal will not guarantee peace. For this to happen both Armenia and Azerbaijan will have to learn the art of making concessions. Moreover, Azerbaijan’s often-coercive strategy will make it difficult to attain a stable peace. Armenia meanwhile is thinking of challenging the existing military imbalance by increasing defense spending and building military-industrial connections with states other than Russia.

Yet, the growing evidence of the potential deal is nevertheless highly promising. It signals a major shift from Russian-dominated efforts to Western-led initiatives. With Russia militarily overstretched, it might be unable to reverse its loss of influence in the South Caucasus.