The occupied Georgian region of Abkhazia has effectively conceded to Kremlin demands on private property, further complicating a fragile relationship 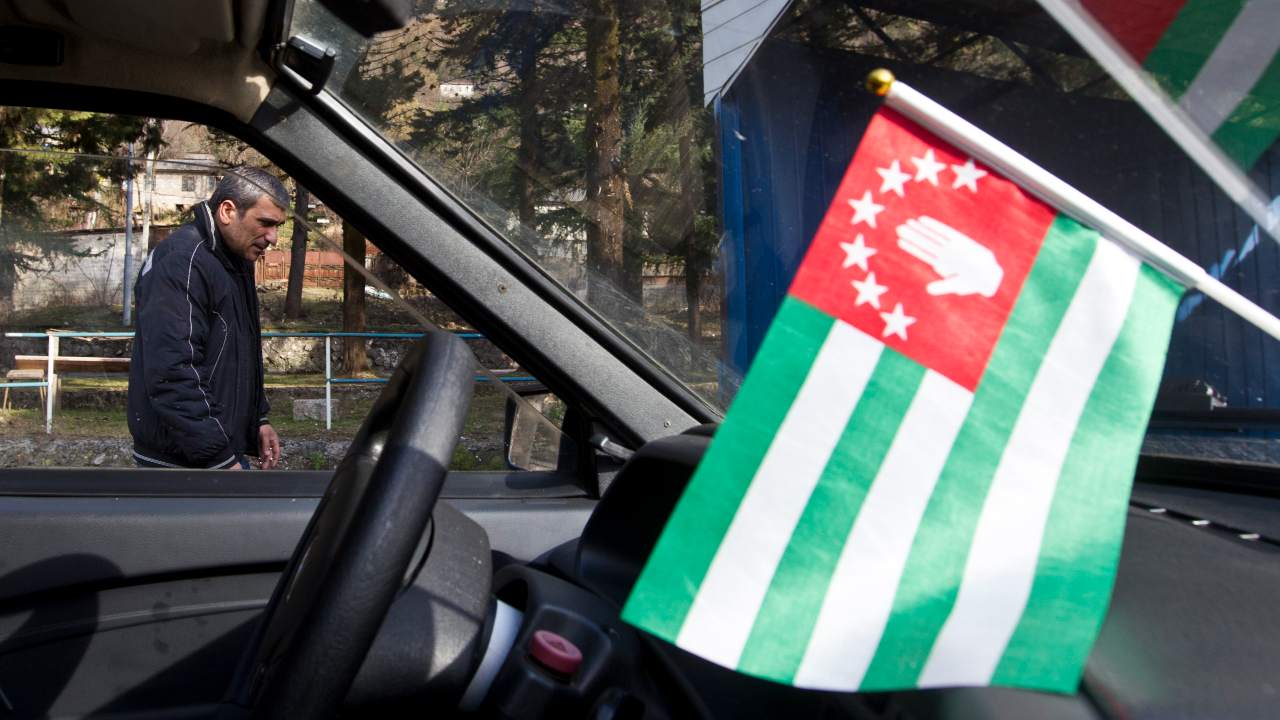 Photo: A flag of Abkhazia is on display inside a car in the town of Tkvarcheli, some 50 km (31 miles) southeast of Sukhumi, the capital of Georgia's breakaway region of Abkhazia December 27, 2013. The territory of Abkhazia is located several miles southwest of the border with Russia and the Olympic Park in the Adler district of the Black Sea resort city of Sochi which will host the 2014 Winter Olympic Games in February. Abkhaz separatists fought Georgian government forces in 1992-1993, after which the breakaway region declared independence. Russia, Nicaragua, Venezuela, Nauru, Vanuatu and Tuvalu recognized Abkhazia as an independent state while all other countries regard it as a Georgian province, according to local media. Picture taken December 27, 2013. Credit: REUTERS/Maxim Shemetov.

Abkhazia’s separatist leadership de facto agreed to transfer the 186-hectare (460 acre) Bichvinta (Pitsunda) estate where Soviet leaders once spent their summers, and its resort seafront, to the Russian side.

The decision is part of an agreement confidentially negotiated in early 2022 between the Kremlin and local leaders, which in turn builds upon the 2020 program aiming at harmonizing the Abkhaz-Russian relationship. In reality, the deal paves the way for the breakaway region’s de facto annexation.

Squeezed between Russia and Georgia (and legally part of the latter), Abkhazia is a small area bordering the Black Sea with a population of about 200,000 people. It fought a war with Georgia from 1992-3 and has been beyond Georgia’s control since that time. In reality, it is a protectorate of the Russian Federation although local leaders claim some degree of autonomy.

Russia’s recent behavior however brings that into question. The Abkhaz population is opposed to the resort’s handover, calling for a moratorium on the process. And though the final decision has yet to be made by the region’s parliament, the overall feeling is one of inevitability about the final decision. The overwhelming public sentiment is that of betrayal by Abkhaz officials of the region’s independence aspirations.

The direction of travel is clear. It follows the decision to hand the non-functioning Sokhumi airport to the Russian tycoon Oleg Deripaska. The airport has been a subject of intense negotiations between the two sides as the Abkhaz representatives pushed for investments from Russia, while the latter seemed unwilling to commit because of the international community’s firm support for Georgia’s territorial integrity, which makes it impossible for international airlines to use the airport. The handover hardly looks like an investment, but rather another concession from the Abkhaz side to suppress Russia’s neo-colonial appetite.

Russia has a strategy that rests on cultivating and utilizing fears in Abkhazia. And with nearly 10,000 Russian troops in the separatist region as a check against Georgia’s NATO aspirations, Abkhazia has little space to resist Russian depredations. Any move to limit cooperation with Moscow would be met with Russian economic and political reprisals. Moves to revive its frozen relations with Georgia would trigger protests by Abkhaz opposition forces, often supported by Russia, which in the past have often culminated in public violence and takeover of administrative buildings.

Russia cleverly exploits the situation through new demands to separatist leaders. Those usually involve rights for Russians to buy land and apartments. Arguably more important is the sale of existing Abkhaz infrastructure such as electricity grids, water pumping systems, and other facilities. Investment is critical to the Abkhaz economy, which traditionally has been entirely dependent on Russian tourism. Yet, allowing foreigners to buy the land (a right prohibited by the Abkhaz constitution) is a deeply traumatic concession.

The Abkhaz are religious about their pursuit of sovereignty. Allowing Russians to own private property undermines this critical sensibility. The prevailing understanding is that the handover of Bichvinta to Russia is unlikely to be temporary, but will rather become permanent.

Aslan Bzhania, the Abkhaz separatist leader, blackmailed the population by arguing that the request for the estate’s handover came directly from the Russian leader Vladimir Putin, who wants to hold official meetings there. The Abkhaz side, Bzhania argued, could not ignore it because Russia is the security guarantor without which Georgia would be emboldened to enforce its territorial integrity.

Blackmail comes from the Russian side too. Mikhail Shurgalin, the Russian ambassador to Sokhumi, argued during a meeting with Abkhaz non-governmental organizations (NGOs) that the refusal to follow the Russian request could result in Russia’s reconsideration of financial and military support to Abkhazia.

Abkhazia’s future is looking bleak. With the aggression against Ukraine in February, Russia now demands absolute solidarity from its allies, which limits Abkhazia’s space for maneuvering.

In addition, the war in Ukraine has encouraged the West to see separatist conflicts in the wider Black Sea region through the prism of Russia’s malign geopolitical policies. Any hope of international recognition has fallen to below a vanishing point.

What Russia does in Abkhazia fits the Kremlin pattern of explicitly imperial behavior. Modeling on the Soviet leaders and Romanovs, the present Russian leadership now openly seeks annexation of lands. But Russia’s behavior also signals the growing troubles in its “separatist empire”.

Amid defeats in Ukraine and a lack of support in the international arena, blackmail has now become Russia’s tool of choice when it deals with its loyal partners and allies. There is no love in this marriage.