The glory days of Russia’s Roscosmos are behind it; the agency is now engaged in an arid blame game 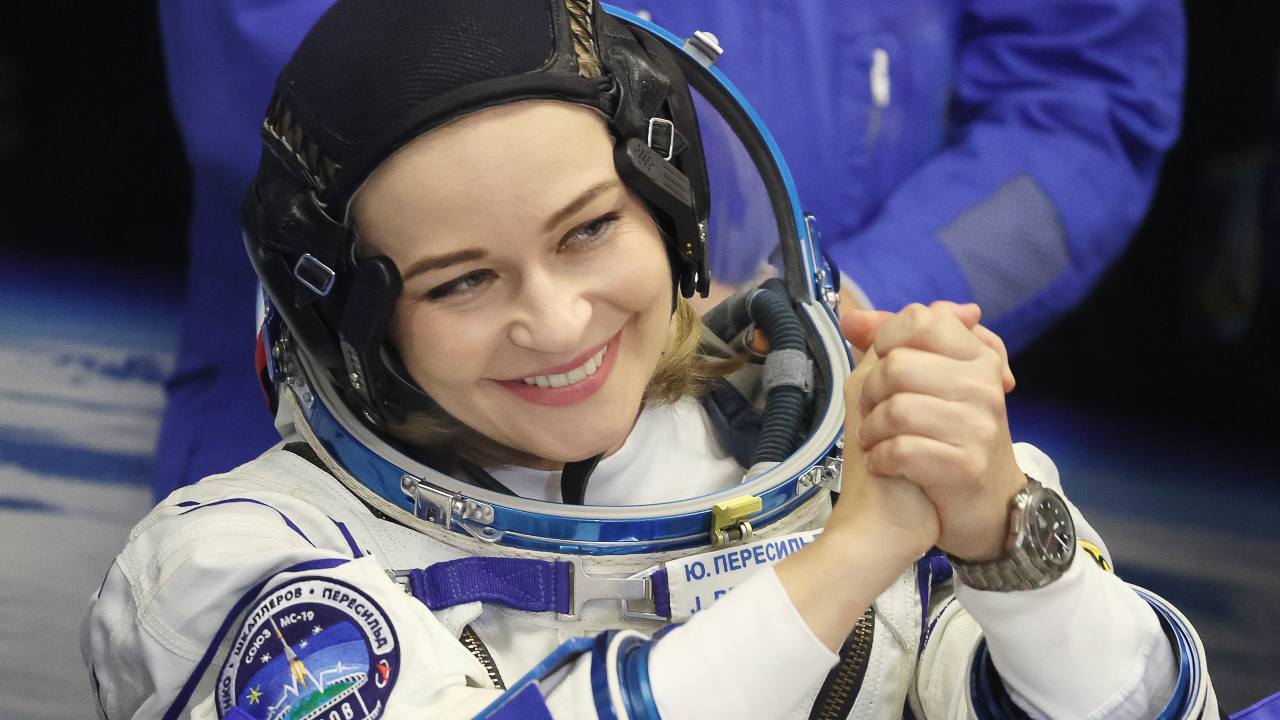 Photo: KYZYLORDA REGION, KAZAKHSTAN – OCTOBER 5, 2021: Actress Yulia Peresild of the ISS Expedition 66 prime crew poses with her space suit on at the Baikonur Cosmodrome ahead of the launch of the Soyuz MS-19 mission involved in making the feature film "The Challenge" (working title) aboard the International Space Station, which is scheduled for 5 October 2021 at 11:55 Moscow time. Apart from Peresild, the ISS Expedition 66 prime crew also includes Roscosmos cosmonaut Anton Shkaplerov and film director Klim Shipenko. The film is a joint project of Roscosmos and Channel One. Credit: Sergei Savostyanov/TASS

This week a Russian actor and director arrived 250 miles (400km) above Earth at the International Space Station (ISS) to start filming on a new feature project called The Challenge — which is expected to be the first film shot in space. Yulia Peresild, a 37-year-old actor of  Estonian descent, and director Klim Shipenko, 38,  lifted off from the Baikonur Cosmodrome in Kazakhstan on October 5 to spend 12 days shooting.

The Challenge is a docudrama about a female surgeon having to operate on an astronaut in space. And as always, there is a strong political theme to the event, if not in the script. Russia has been racing to beat a U.S. film crew into space; Tom Cruise and NASA have reputedly been planning to shoot with the aid of tech billionaire Elon Musk.

A new space film is of course exciting, but its glitz masks serious problems with the Russian space agency, the once-mighty Roscosmos, which has not only sought to crack down on internal dissent but also to prevent reporting on its activities in both the military and space spheres.

From October 11, anyone reporting on space activities or the military will be automatically branded a “foreign agent.” This means any discussions surrounding production capacity, plans, organizational restructuring, new technology, or materials (among many other things) will be severely restricted. That also means that reports on Roscosmos’ internal problems will struggle to see daylight.

As so often in Russia, the problems relate to an agency run by an established member of the political elite, Vladimir Putin appointee, Dmitry Rogozin, and the story emerged in Novaya Gazeta, a news outlet which has seen several of its journalists murdered, and whose editor, Dmitry Muratov, was awarded the Nobel Peace Prize on October 8.

Not only have stories emerged of poor management and financial problems at the state-run agency, but also of a vicious crackdown against staff speaking to journalists. In July, veteran Soviet cosmonaut Sergei Krikalev — the last cosmonaut in a senior leadership role — was fired from his post at the agency after questioning whether sending entertainers into space was the best use of funds when the budget had just been cut by 20%. He was reinstated shortly afterward and has not spoken publicly since.

Other Roscosmos staff however followed his lead, speaking to Novaya Gazeta about the agency’s repeated purges of so-called Russophobes, and on the sometimes eccentric spending decisions.

For example, erratic project management included a new ISS module sent into space despite an intended lifespan of just a few years, constantly changing deadlines and the prioritizing of geopolitical interests over strategic partnerships.

“Our systems do not need any advertising about their reliability and safety. Foreigners have been flying on Soyuz for 30 years,” another veteran cosmonaut Gennady Padalka told Novaya. “Korolev, Gagarin, Voskhod, Vostok, Soyuz do not need PR and propaganda; they have already gone down in history . . . and not remotely because of the current efforts of Roscosmos’ leadership.”

In case there was any misunderstanding about who he blamed for the mess at Roscosmos, Padalka added: “It would be understandable if the current heads created something unique and wanted to promote that [instead].”Such as, for example, the new Sokol-M spacesuits which now come with a fly, as well as a shorter lifespan.

Allegations of poor management are not confined to Roscosmos. The agency is emblematic of other government-run agencies. Andrey Ionin, of the Russian Academy of Sciences, told Novaya that “this is all part of the aggressive expansion of the Russian ruling elites inside state monopolies.”

According to Rogozin, a prominent nationalist appointed by Putin in 2018, the problems simply relate to a lack of funds and the effects of U.S. sanctions. “There is a big difference between the spending on the Soviet and Russian cosmonautics. We are under huge financial constraints,” he told an audience at the Russian Academy of Sciences in April.

And there is truth in that. The Roscosmos budget for 2020 is just one-third of its 2014 level, at $1.7bn, and is far below NASA’s budget of $22.6bn. China’s spending on space has meanwhile been soaring, although it has not reached U.S. levels.

The idea that Russia is simply falling behind in an unaffordable race understandably does not appeal to Russian presidential spokesman Dmitry Peskov, who explains that at least some problems simply stem from negative Western efforts to “humiliate” the Russian space program.

In reality, he said, Russia is a pioneer and missions such as filming The Challenge “help advertise our achievements and space exploration in general [and] are great for the country.”