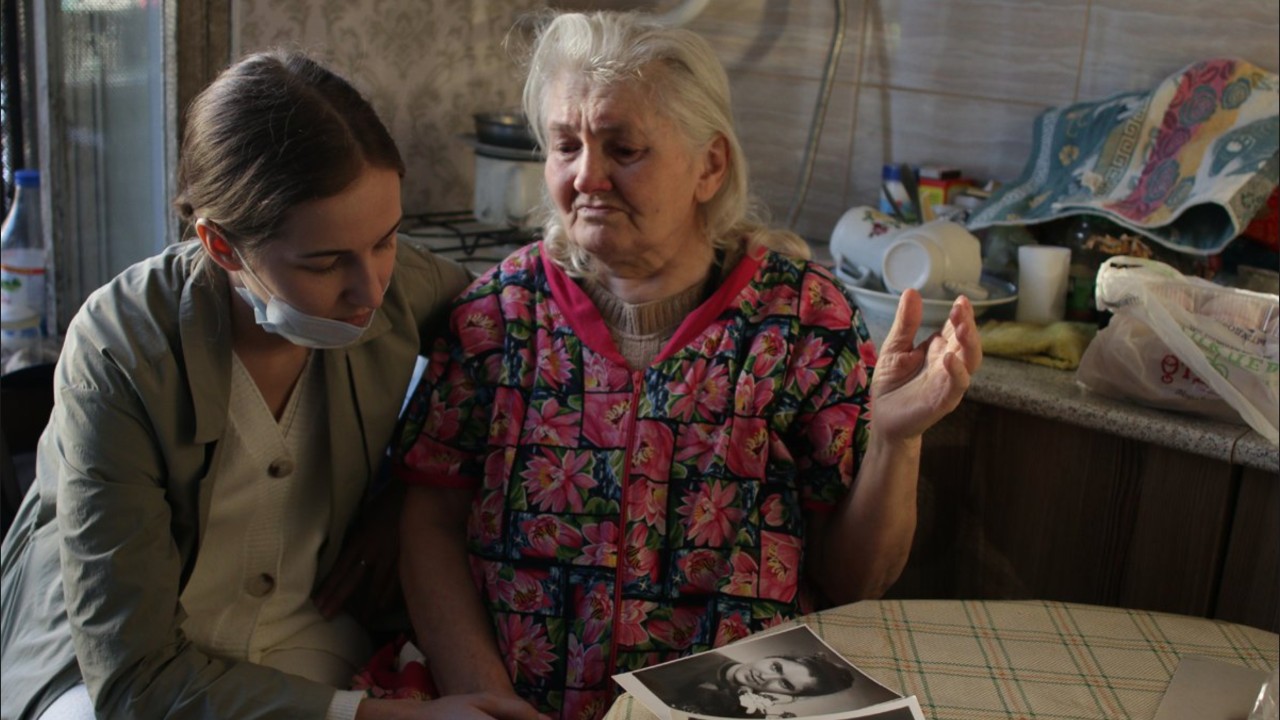 Photo: Anastasia Volkova, a volunteer from the group "Be with us", with Alexandra Gavrilovnaya. Credit: Svetlana Vidanova / Novaya Gazeta

Alexandra Kovaleva – or Baba Shura (Granny Shura) as she is known — is an 84-year-old Moscow resident forced by legal authorities to live in degrading conditions in one of the wealthiest cities in the world. She has been charged, for more than a decade, for utilities that don’t exist. She has no water and no electricity, but the authorities nonetheless claim she owes more than $7,000 in unpaid bills.

Russians have been outraged by the story, which appeared in Novaya Gazeta, and which for many summarizes much that is wrong with their country. The tale of seemingly endless bureaucratic ineptitude, deliberate deprivation of resources, and exploitation by neighbors is depressingly familiar. It all began 13 years ago, when a minor utilities debt suddenly led to her resources being cut off, despite promises that this would not happen.

First, they cut off the gas and disconnected the stove, then they shut off her water and removed her faucets. She scraped together enough to pay off the initial debt, unaware that the money was credited for the non-existent usage of utilities that had already been cut off. The debt snowballed and the courts ultimately decided that Baba Shura owed 554,000 rubles. In the event of non-payment, the court threatened to cut off the gas and water that had already been terminated in 2008.

“In August 2020, Baba Shura was summoned as a defendant, for the non-payment of debt on utilities that have been disconnected for 13 years. She was not provided with documents outlining the court’s decision, not even copies, nor the initial claim – in short, nothing that would help her appeal, Novaya Gazeta’s Nataliya Chernova wrote.

Utility bills were not her only problem. Baba Shura owed a neighbor 100,000 rubles (around $1,400), money borrowed after the devastating death of her daughter. In exchange, he would claim her pension to compensate for the up-front sum.

Russia’s elderly struggle even without being exposed to the Kafkaesque legal system. In 2018, angry protests swept the country after the Kremlin announced that it would be increasing the retirement age, leading many to grimly point out that people would die before qualifying for pensions. Ever-increasing debt and poverty are an enormous burden on the lives of Russians, especially the elderly population who often end up living with younger relatives in later years.

President Vladimir Putin promised last year to eliminate poverty in the provinces, where malnourished pensioners queue for giveaways of expired foods. However, this heart-wrenching case is happening in the nation’s capital city.

The pandemic has undoubtedly made the situation worse. Last March, authorities in Moscow announced measures forbidding people over 65 from leaving home, with the city offering just 4,000 rubles (around $50) in compensation. Some 21 million Russians live below the poverty line, with the state-defined minimum wage equating to 10,800 rubles (about $165) a month.

Income inequality has been growing for years. After the pandemic, Russian citizens are expected to be about 10% poorer than they were in 2013. But despite the socio-economic ills that poverty brings, it is not a priority.

The issue is worse in the regions beyond the capital. Earlier this year, Novaya reporters visited the Siberian city of Yakutsk and found a city in disrepair. In residential areas — specifically the impoverished 17th Quarter — some houses were so dilapidated that bathrooms had fallen through to the floors below, walls crumbled, dumpsters overflowed and residents emptied toilet waste from buckets in their yards.

The Muscovites that have noticed her plight are furious. Over the same period that she has accrued such significant debts, her city became ever wealthier and now ranks 25th in the world for its population of billionaires. Kovaleva’s story resonated with so many Russians because it marks growing public recognition of widening income inequality.

“Be With Us,” a social initiative, has started examining Baba Shura’s case and offering her administrative support. But it too has fallen victim to bullying and harassment from anonymous individuals. Lawyers say the old lady has not exercised all her rights,  indicating that in reality there is little legal protection for the poor and the elderly.

Born in 1937 and having lived through World War II, Baba Shura later found work in a factory. Injured at work in 1975 but never compensated, she was provided with a Moscow apartment and asked to resign. She became a mother, but the father beat her and then left.

Working in low-paying jobs, her daughter fell sick in 2009 and died 10 years later. Baba Shura has “lost her reflexes, intelligence, and mobility. She also lost her family. She clings to her two-room apartment not as a living space, but as the last island of life that is given to her,” Chernova wrote.

Hers is one of many sad stories amid falling or stagnated incomes across the country — of a lonely old lady unable to afford the essentials and losing her dignity as she struggles to stay alive.

This story is written by Aliide Naylor and is based on reporting by Natalia Chernova for Novaya Gazeta. Russia, Explained is a weekly newsletter by Russian independent newspaper Novaya Gazeta. Read the edition upon which this adaptation was based. Courtesy of the Russian Language News Exchange