Navalny has now ended his life-threatening hunger strike but the campaign against him and his supporters is far from over. 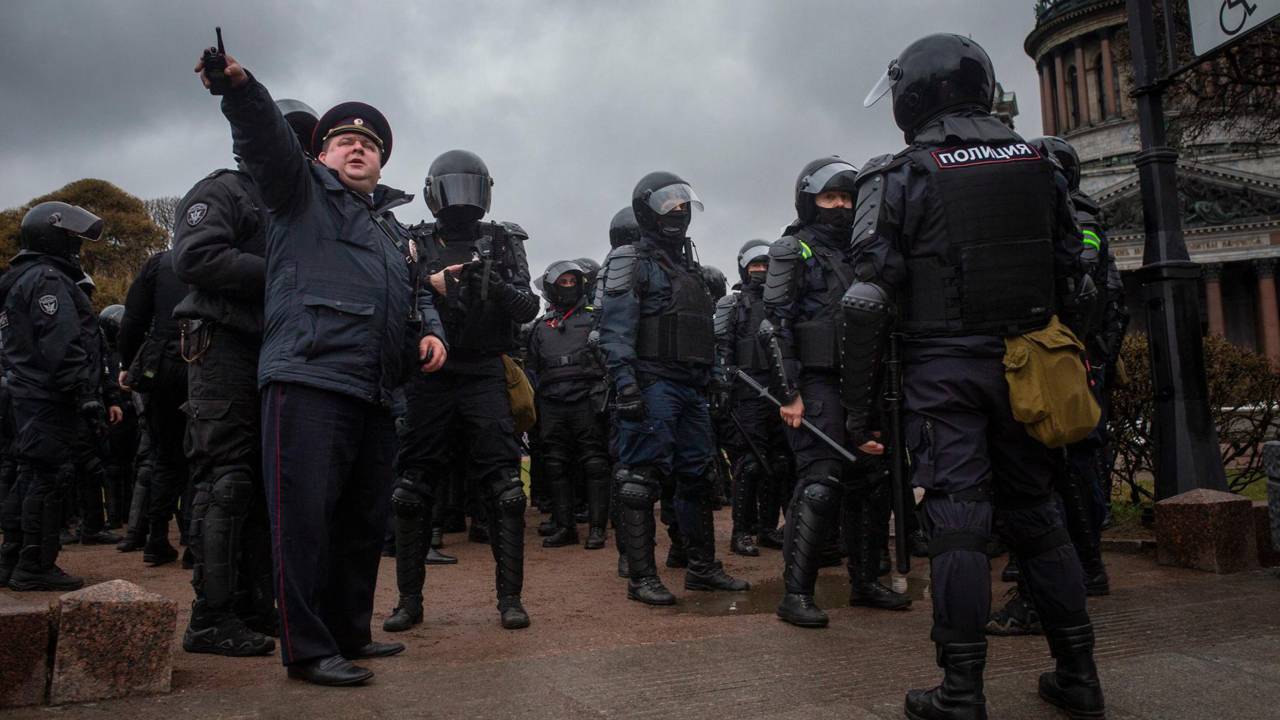 The fifth wave of mass protests supporting Russian opposition activist Alexei Navalny swept through Russia last week. This was not the biggest during three months of demonstrations since his arrest and yet the security forces detained more than 1,900 peaceful protesters — the most since January. Around half of all those arrested across Russia last week were detained in St. Petersburg.

Once an opposition outpost, not to mention the epicenter of the 1917 Russian Revolution, Russia’s liberal, literary “northern capital” has fast become a hotbed of police violence.

“Some of the harshest detentions took place there, and from time-to-time electric shocks [from stun guns] crackled. These weapons were also used in the metro concourses, where people were thrown onto the stone floor and beaten,” a witness told Novaya Gazeta’s St. Petersburg correspondent, Tatiana Likhanova.

“I am 65 years old. I’m short of breath, and I have high blood pressure. I’ll die here,” said another protester as he was attacked and bundled into a bus. Officers appeared ready to let him go, until the appearance of their boss, Lieutenant Colonel Vitaly Kosarim, who shouted that there was still space in a second bus.

Kosarim is the current head of the 2nd Directorate for the Protection of Public Order (part of the Russian Ministry of Internal Affairs (GU MVD)). Known as a ferocious street marshal , some local people have taken to social media asking for help to “identify the monster” along with amateur phone snapshots. His reputation has even led him to be nicknamed the “Adrenaline Doughball” by his own men, a non-admiring reference to a Russian children’s tale.

Back in January, St. Petersburg police were noticeably more hardline toward protesters than elsewhere, escalating to the point that one even drew a firearm in the street, while others electrocuted protesters with shock batons and many demonstrators were badly beaten. In the wake of those protests, St. Petersburg was home to the highest nationwide rate of complaints about injuries and police misbehavior.

Novaya Gazeta’s Likhanova recently exposed the full extent of Kosarim’s influence, and his role in perpetuating this spike in officer violence since he rose from the ranks in the city of Bryansk, some 380 kilometers southwest of Moscow.

A former head of the riot police, Kosarim first started making a real reputation for police brutality two years ago — most notably as he presided over the dispersal of the May Day demonstration in 2019. Then, St. Petersburg recorded more than half the 124 people arrested across Russia, and reports of police brutality came flooding out of the city even though the events was officially approved. Navalny’s campaign coordinator in St. Petersburg, Aleksandr Shurshev, was singled out and tackled to the ground by police, and was later imprisoned for 10 days. Demonstrators also alleged that a woman’s arm was broken during the violent crackdown. That year, he spoke at a Russian MVD forum about the legislative framework and general rules for coordinating mass events.

Local authorities have been encouraging Kosarim’s “successes” and he has been rewarded with bonuses. At the end of 2011 he received a sum of 25,000 rubles (around $870), “for excellent performance of duties in the protection of law and order on the territory of St. Petersburg.”

Meanwhile, special analysis from the Novaya Gazeta data department’s Daria Talanova examines why the arrest figures are so high in general for 2021. They have already reached the levels of 2020 after just four months of the year, and there are a wealth of factors at play besides Navalny’s situation and broader questions about the post-Putin era. Referencing all court decisions under Article 20.2 of the Administrative Code (on violating the procedure for organizing or holding a rally) since 2015, Talanova spotted a pattern of growing legal ambiguity of what constitutes a violation. Authorities often loosely interpret the laws, finding loopholes such as declaring any protest participant an organizer and then charging them for failing to request permission to protest, or accusing protesters instead with obstructing or interfering with pedestrians.

Russian officials also appear to have figured out how to eliminate one of the most effective forms of civil disobedience in Russia in the last decade. After the Bolotnaya protests in 2012, the Kremlin ramped up restrictions on gatherings. Single-person pickets emerged as the only forms of protest not requiring preliminary approval from authorities and could also be held spontaneously. However, in practice, many single-picket protesters were still detained (such as activist Vladimir Ionov, who was ultimately forced to leave Russia in 2015). The authorities have responded in recent years with a crackdown on such protests, including additional legal restrictions and increased fines.

The mass solidarity movement with imprisoned and poisoned opposition leader Navalny was sparked in late January when he was sentenced on politically motivated charges to more than two years in a penal colony. Since then, Russian security forces have arrested over 13,000 protesters. The latest wave of repression is part of a broader crackdown on dissent that intensified following President Putin’s 2020 constitutional power grab, after which the government introduced new and dramatically expanded laws targeting civil society groups and journalists.

Navalny has now ended his life-threatening hunger strike, appearing emaciated as he made his first court public court appearance on April 29 since ending it. But the campaign against him and his supporters is far from over. The Russian prosecutor’s office suspended the operations of Navalny’s political organization, the Anti-Corruption Foundation, on April 26, and declared it an “extremist” organization on April 30 — meaning that members could face 10 years in jail and people providing financial support, 10 years.

This story is written by Aliide Naylor and is based on reporting by Tatiana Likhanova and Daria Talanova. Russia, Explained is a weekly newsletter by Russian independent newspaper Novaya Gazeta. Read the latest edition to learn more. Courtesy of the Russian Language News Exchange