A suicide epidemic is ravaging indigenous nations in Siberia. 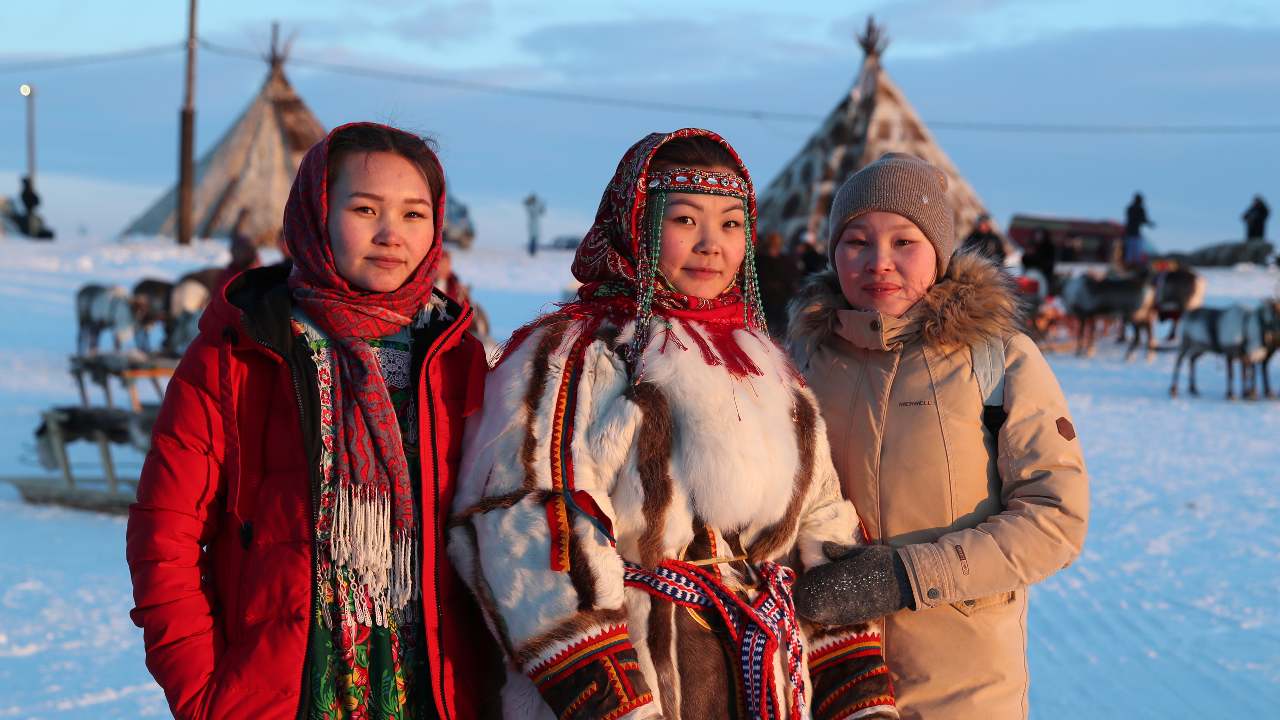 Photo: SALEKHARD, RUSSIA - MARCH 27, 2021: Women wear traditional costumes during celebrations of Reindeer Breeder Day, the main holiday of indigenous peoples of the Russian Extreme North, by the Polyabta River in Salekhard, the capital city of Yamalo-Nenets Autonomous Area in the north of West Siberia. Credit: Alexander Ryumin/TASS via Reuters

A suicide epidemic is ravaging indigenous nations in Siberia. The Uralic Nganasan community in Siberia’s northern reaches is disappearing at a shocking rate – just three decades ago, there were some 1,300. Now, there are only around 700.

In the Nganasan settlement of Ust-Avam in Krasnoyarsk Krai, there are more suicides than natural deaths. “Six people die here every year. One of these deaths is the result of natural causes. Two or three freeze or die drunk. And two or three kill themselves,” write Novaya Gazeta special correspondents Elena Kostyuchenko and Yuri Kozyrev after visiting the region.

The community is suffering the devastating effects of global warming, man-made environmental degradation, and severe poverty fuel depression. Out of 359 residents, just 54 have jobs.

“People crack, young people in general break down. The suicide rate is higher among young people. There is no work, nothing. Here you need to pay for lighting, and need to work for food. There is no food, no work, no money,” one young resident says. Her sister also committed suicide, leaving behind an 11-year-old son.

It’s often necessary to rely on anecdotal evidence about indigenous issues. Media reports are sparse and obtaining concrete statistical evidence about indigenous tribes such as the Nganasan is tough. And some deaths may be portrayed as suicides when there is little public information about the facts (for example, the death of one 15-year-old girl, in an uncomfortably termed “relationship” with a 24-year-old adult male police officer was styled in 2004 as a Romeo and Juliet story by local press).

The Nganasan are the descendants of semi-nomadic reindeer hunters, with ancient roots and a shamanistic spiritual culture. Even under Peter the Great (in the 17th and 18th centuries) there was a drive to “civilize” Russians in the further-flung regions and catch up with Europe, writes historian Yuri Slezkine. Peter instructed missionaries to find native Siberians and their “seductive false gods-idols and burn them with fire … and destroy their heathen temples”. Such ideas gained greater momentum in the 20th century, and the indigenous people were later forced into reservations under the Soviets in the 1930s. Nomadic civilizations were considered fundamentally incompatible with government-sanctioned lifestyles and these “small nations” of the North were seen as somehow representative of an undesirable past.

The Soviet state collectivized their personal property, including tents, guns and traps, and even reindeer herds. This led to a complete loss of reindeer husbandry and resulted in a steep decline in the reindeer population from the 1950s onwards.

Meanwhile, Soviet enforcement of Russian literacy made the local language almost extinct. Much like practices imposed on indigenous communities in other parts of the world, the Kremlin would take away local kids from their parents and send them to study in boarding schools.

“There, speaking Nganasan was forbidden, and teachers punished them for every Nganasan word they used — beaten with canes, kicked out of the class,” said local linguist Valentin Gusev. Today, Russia is home to 260,000 people from indigenous communities – who constitute just 0.2% of the country’s population. The government officially recognizes 40 separate indigenous groups in the North, Siberia, and the Far East.

The catastrophic impact of climate change in the Russian Arctic limits the Nganasan’s fishing opportunities — their primary food source. Meanwhile, the government continues to restrict hunting, which is a widespread source of tension between the Kremlin and indigenous communities elsewhere across Russia. With a de facto ban on hunting, the Nganasans stopped following the routes of wild herds. Local food available for purchase can be out of date or moldy, and chronic alcohol use continues to plague the population.

Aggressive industrial development in the Russian Arctic has massively exacerbated the crisis among the Nganasan. Last year, a Norilsk Nickel (Nornickel) diesel spill became the largest human-made fuel spill in Arctic history, after which Russia’s government colluded with the company (which is the nation’s largest nickel producer) to whitewash the disaster. The spill affected the environment that provided the Nganasan with basic food supplies. “They catch fish; they hunt deer. But there are no fish this year. And the deer left for other lands three years ago,” Kostyuchenko and Kozyrev wrote.

Last year, northern indigenous tribes signed an open letter to US business magnate Elon Musk and Tesla asking him not to purchase any nickel, copper, and other materials from Nornickel in the wake of the disaster. On average, the Norilsk Mining and Metallurgical Combine plant has released 30 tons of metallic dust and heavy metal oxides annually since it began production in the late 1930s, according to researcher Konstantin B. Klokov.

There has been a recent spike more generally in tensions between federal authorities and indigenous communities. Some of these nations have mobilized against an over-centralized state, government-backed environmental assaults on their sacred lands, and have demanded the return of their autonomy. In Kalmykia, for example, the majority-Buddhist region has engaged in protests against a Kremlin-appointed mayor. In Buryatia, locals rallied against a rigged election for weeks. And in a case that sent waves across Russia, a Sámi activist filed a complaint with Russia’s Supreme Court last year, after the government denied him the right to hunt without a license.

This story is written by Aliide Naylor and is based on reporting by Elena Kostyuchenko and Yuri Kozyrev. Russia, Explained is a weekly newsletter by Russian independent newspaper Novaya Gazeta. Read the latest edition to learn more. Courtesy of the Russian Language News Exchange.