The Kremlin paid for credibility during last year's controversial referendum. 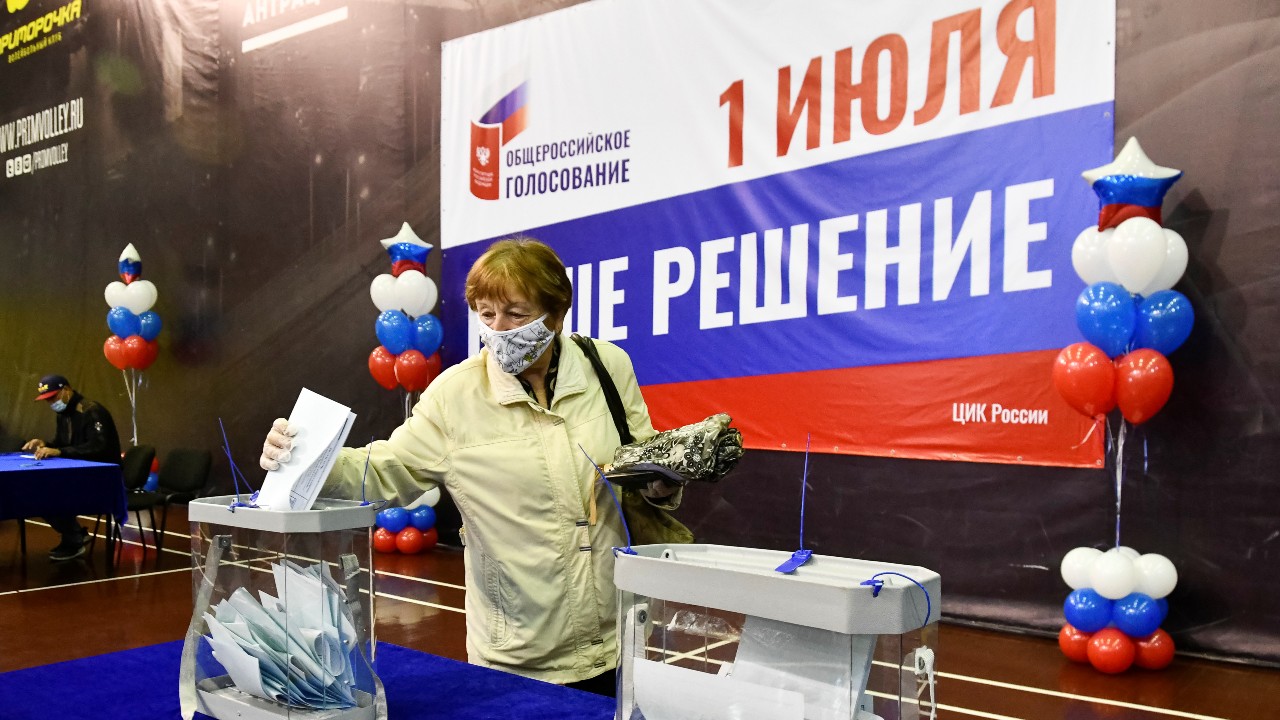 Photo: A woman casts her ballot at a polling station during a seven-day vote for constitutional reforms in Vladivostok, Russia, June 25, 2020. Credit: REUTERS/Yuri Maltsev

Russia paid to charter flights for pro-regime foreigners, described as election observers, to whitewash a vote organized by President Vladimir Putin which could allow him to remain in power up to the age of 84.

The Russian public likely footed the bill for last summer’s flights and accommodation, according to Novaya Gazeta’s Denis Korotkov and Mikhail Khodorkovsky’s Dossier Center, which this week established the identities of around 60 foreign representatives from 29 countries who were flown in to give credence to the controversial vote.

While Russia had boasted of the foreign observers’ presence, the authorities have refused to provide a complete list of those who flew to Moscow to “monitor and certify” the constitutional referendum, which would Putin to remain in office until 2036, if re-elected.

The mix of “experts” featured far-right party politicians and businesspeople and some odd outliers, such as an Austrian psychotherapist and a woman of unknown profession from Uzbekistan. French nationals featured most heavily on the list, followed by Serbs. There were also Latvian, Lithuanian and Armenian attendees. The complete list, along with their assigned plane seats, was also published.

The group was there ostensibly to “observe” a nationwide ballot from June 21 to July 1 last year, although the event was officially neither a referendum nor an election (it was technically referred to as an “All-Russian Vote”) which meant that international monitors could not be invited as official election observers. Thus, members of the group were referred to as “experts” to circumvent the issue, and were apparently selected for their sympathy toward the regime.

The observers concluded that the vote was free and fair, that there were no violations other than a few minor problems, and that these had little-to-no influence over the expression of voters’ will. While there were few comments directly from the observers in the media, or on social networks, one or two made more general comments. “Russia astonishes, with the richness and depth of its history, and I think that the younger generation should remember, know about, and reflect upon it,” said Yasar Ahmadzai, from the Afghanistan Institute of Peace.

Elsewhere, there were widespread accusations of fraud. The physicist Sergei Shpilkin, who has tracked election malpractice in Russia, estimated that as many as 22 million votes were fraudulent, which he described as “unprecedented.” Janis Kluge of the German Institute for International and Security Affairs called the vote-rigging “simply staggering”.

The Kremlin has been limiting international oversight of Russian elections since the 2000s. However, the number of Kremlin-sanctioned election observers has continued to increase. This facade of monitoring throughout the voting process allows the Russian government to claim a degree of international legitimacy. The Kremlin often approves or disapproves of certain individuals depending on their political alignments.

“We saw an almost complete list of foreign experts who, collectively, are brought to Russia to create the image of international approval for rather questionable electoral procedures,” Korotkov wrote.

The political extremism of many observers suggests the Kremlin is often forced to scrape the bottom of the barrel. Among the contingent shipped to Moscow last July were far-Right French politicians from the National Rally (National Front), who were predominantly based in Crimea over the course of their Russia trip. Apart from AfD members, the far-Right German delegation included Volker Chapke, the head of a group advocating for the restoration of Prussia, a state abolished by Stalin and the wartime Allies.

While the Russian government says that it did not finance the trip, and Ural Airlines would not provide any details about whether they were operating under a government contract, clearly somebody paid. The Airbus A321 transported the group as one between Minsk and Moscow — and it wasn’t cheap.

However, some of the observers were members of the European Parliament, who have to report third-party financing of their travel or accommodation expenses. These receipts showed clear traces of Russian government funding. Specifically, an MEP and French National Rally member Thierry Mariani submitted a declaration showing that the Russian Civic Chamber (a state-funded institution described as “a civil society council to the government”) was paying his expenses during the trip. Mariani stayed at a Radisson in Moscow and at the five-star Crimea Breeze Hotel in Yalta, where guests enjoy sea views and July temperatures averaging 72F (22C).

Novaya Gazeta and the Dossier Center sent around 50 requests asking experts from the list to confirm who exactly invited them, who paid for the trip and whether there was compensation for participating, but there were no responses.

While not all the experts in this particular monitoring group are very expert, some better-known political figures are involved in the Kremlin’s projects, specifically Eurosceptic politicians on both far-Right and far-Left of the political spectrum, most notably, French and Italian far-right leaders Marine Le Pen and Matteo Salvini, and figures from the German far-Right AfD (Alternative for Germany) have journeyed to Russia. Observers’ from Russian-controlled statelets (such as Abkhazia or Donbas) or friendly authoritarian regimes (Belarus, Venezuela, and Tajikistan) are also regularly welcomed by the Kremlin.

This story is written by Aliide Naylor and is based on reporting by Denis Korotkov and the Dossier Center. Russia, Explained is a weekly newsletter by Russian independent newspaper Novaya Gazeta. Read the latest edition to learn more. Courtesy of the Russian Language News Exchange