Russia Election: Millions of Votes but Only One Outcome

This weekend (September 17-19) Russians will vote for 450 members of the Duma, the country’s lower legislative body. Although the polls for Putin’s party — United Russia — are grim, the outcome is preordained. 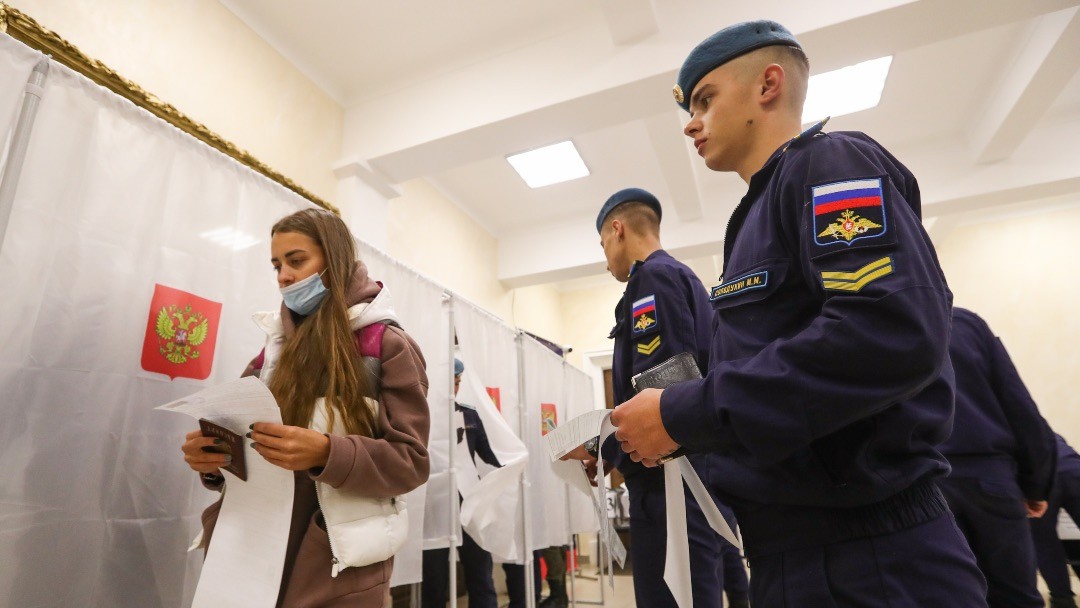 After winning 54% of the vote in 2016, the best poll suggests the incumbent’s expected to share at a meager 40%, with most of the difference going towards communists and ultranationalists. Yet United Russia, in near-total control of the state, has aimed little of its considerable repressive arsenal at its putative opposition and has instead focused on the country’s beleaguered liberal movement.

The paradox is explained by President Vladimir Putin’s vision of himself as the man who has pushed Russia beyond the chaotic Yeltsin-era when liberals were at their most powerful and has moved on to confront the hegemony of the liberal West. By targeting liberal politicians and journalists, Putin shores up his support not so much by marginalizing potential opposition as by showing himself as a leader standing up to Western interests and taking on Russia’s enemies from within.

Despite the rise in support for the communist (KPRF) and ultranationalist (LDPR) parties, Putin’s coalition faces no serious threat to its rule. KPRF ruled in coalition with the United Russia-forerunner, Unity, in Putin’s first term, and Putin’s rehabilitation of Soviet leaders and iconography has endeared him to many communists. As early as 2000, commentators noted how little separated the policies of Putin and communist leader Gennady Zyuganov. The relationship has ebbed and flowed since, with a rift this year emerging over the banning of KPRF’s most recent presidential candidate for running for the Duma, but the ambitions of KPRF seem no greater than having a larger say in policy-making. The LDPR, under the eccentric leadership of Vladimir Zhirinovsky, has largely been seen as a party of clowns rather than a potential party of power like United Russia. Despite bombastic rhetoric, LDPR has supported both Putin’s strongman and anti-Western posture and sweeping constitutional amendments.

Putin’s hedges against a serious opposition extend beyond ensuring a pliant opposition. An array of state and state-friendly actors control major television networks and newspapers, a primary source of information for Russians, and officials have dictated to journalists what is off-limits. Extremism and foreign agent laws have meanwhile hovered like a specter over a badly wounded independent media. The result is often a “firehose of falsehood” that undermines the basis of dissent, with narratives that either falsely radicalize, or disregard the opposition completely.

Peter Pomarentsev, a scholar of Russian media at the London School of Economics (LSE), has explained the goal of Kremlin media control is not just to “show that it has total control over the script,” but to “engender cynicism in the population” through the peddling of contradictions, conspiracy theories, all the while offering positive coverage of Putin as a staunch defender against Western encroachment.

The presence of politicians and journalists espousing Western values, whose marginalization elicits Western ire, provides the perfect opportunity to promote this version of Putin. For this, the Kremlin employs an extensive toolkit. As highlighted by Cameron Ross, a professor of Russian politics at the University of Dundee, in an analysis of several elections, the Kremlin has come to focus more on taking control of regional commissions, frequently amending electoral laws, and focusing on “mistakes” made by candidates to deny them registration.

There is no shortage meanwhile of attacks on media, small or large. The opposition publication Meduza earned the dreaded “foreign agent” designation, a move that has driven away advertisers and other sources of income that independent journalism needs to survive. The student magazine DOXA and investigative start-up IStories saw their newsrooms raided. The editor of Proekt, an investigative outlet, had to flee Russia and evacuate his staff after authorities labeled it an “undesirable” organization. The alternative was criminal prosecution and possible jail time.

The administration has marginalized liberal politicians along with journalists. Opposition leader Alexei Navalny’s Smart Voting project has in previous elections successfully coordinated opposition to United Russia, so police responded with targeted raids on the movement’s offices, supporters’ homes, and the freezing of personal bank accounts. Navalny’s organization, the Anti-Corruption Foundation, has also been labeled an “extremist” organization – a step up from “foreign agent” status that effectively bars it from operating in Russia. Those even loosely associated with him have since endured systematic attacks, according to Amnesty International, facing charges like “involvement with an undesirable organization,” “incitement,” traffic disruption, fraud, and even sanitary violations. A new law passed in the Duma has now made it illegal for anyone associated with “extremist” organizations to run for election, while the election watchdog Golos estimates new legal restrictions could disenfranchise more than 9 million Russians.

Russians have long associated liberalism with the privatization and shock capitalism that sparked chaos from the 1990s weakened Russia’s global standing and sent living standards plummeting. All things associated with liberalism–Navalny, the U.S., the Yabloko party–simply lack widespread popular support. As Russia reasserted itself globally with invasions and hardball tactics to bully neighbors, the Western response helped to create a siege mentality: Sanctions led to a “rally-round-the-flag” effect, for example, and Russian elites came to promote promote “collective resistance” as both a value and core element of post-Soviet identity — something that has helped ensure regime continuity. And media control allowed the downplaying or denial of the economic impact from sanctions — even if they are seen, many Russians also view their current predicament as vastly better than in the 1990s. Putin’s continued popularity testifies to that, even if it does not necessarily extend to his political party.

Nonetheless, the scale of suppression should alarm anyone interested in democratic governance. The repercussions go well beyond Russia. It sends a signal to both the Russian people and aspiring autocrats that, through its vast anti-opposition apparatus, Russia can stand as a beacon for other illiberal and authoritarian regimes to emulate.