Geopolitical self-interest has no place when it comes to true peace-making. Armenia and Azerbaijan are learning that the hard way. 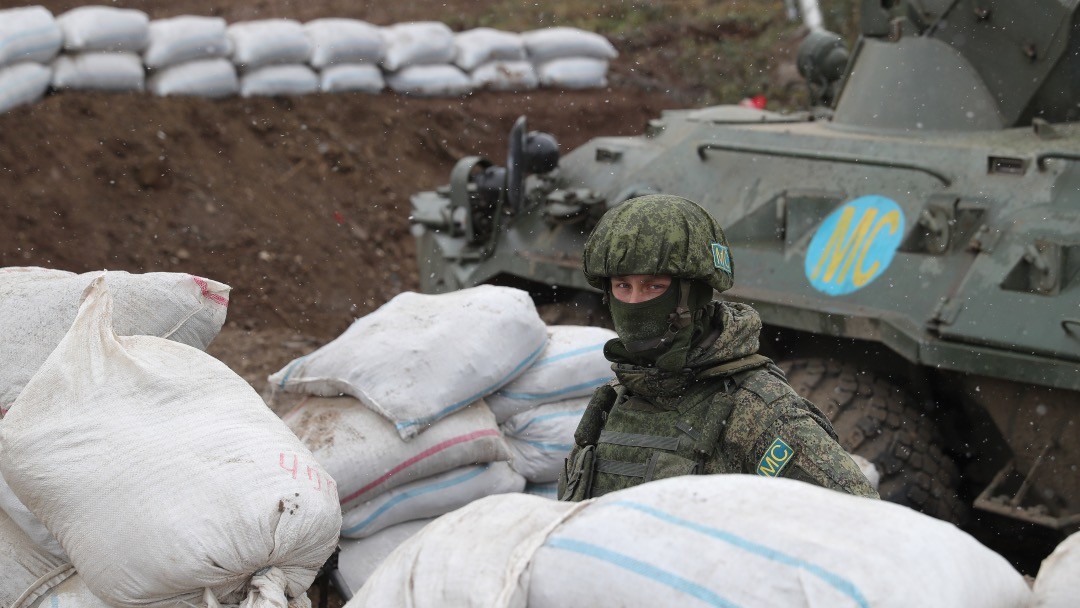 Photo: A Russian peacekeeper on duty at an outpost in the city of Stepanakert. Russian peacekeepers' outposts were established in the Nagorno-Karabakh conflict area according to the trilateral agreement on a complete ceasefire signed by the leaders of Armenia, Russia, and Azerbaijan on 9 November. Credit: Alexander Ryumin/TASS

Russia has a railroad plan for the South Caucasus and it is not working. The main cause? Russia.

The end of last year’s Second Nagorno-Karabakh war brought fresh proposals for the restoration of old Soviet railroad routes, which could open up the region to greater trade and development while giving both Armenia and Azerbaijan an incentive to keep the peace.

The railroad plan would have created winners and losers across the region, and are of acute interest to countries including Georgia, Iran, and Turkey. Rail and roads carry enormous political and strategic importance, and for now, this is more important in the minds of policymakers, especially those in the Kremlin, than more benign aspects like wealth creation.

For Armenia, the borders with Azerbaijan to the east and its ally Turkey to the west are closed. While relations with its southern neighbor Iran are cordial, the only significant transportation links run north to Russia through Georgia. The transport map underlines Armenia’s perilous security status and its reliance on Russia for as long as it remains at loggerheads with Azerbaijan. If hostilities were ever renewed between Russia and Georgia, Armenia would be in an extremely difficult situation. But any plan to ease this reliance would probably either require a railroad to Iran (cost at $3.5bn-plus) or a route through Azerbaijan. Both seem unrealistic at the moment.

The old Soviet system had two railroad lines running from Azerbaijan to Armenia and both allow a connection to Turkey via Azerbaijan’s Nakhchivan exclave.

Armenia is keener to open up the northern route, as most are in working condition, while Azerbaijan supports the southern alternative. From the Azeri perspective, the latter corridor passes through the reclaimed territories in Nagorno-Karabakh and only a narrow swath of Armenian land before reaching Nakhchivan.

For Iran, the post-2020 conflict resulted in a less favorable outcome than for other regional powers. Ever since the First Karabakh War ended in 1994, Iran has enjoyed a potential stranglehold on Azerbaijan, with Iranian heavy goods transit routes critical for Azerbaijan proper to connect to Nakhchivan. Anything that ended this reliance, like railway reopenings, would weaken Iran’s hand.

Turkey has emerged in a much stronger position. Both proposed railway lines would connect it to Azerbaijan and the country has already announced a plan to build a new railway link to Nakhchivan.

But it is Russia’s view that is decisive. For Vladimir Putin, the military calculus is a real motivator. Penetrating the South Caucasus at will has been a major driver behind Russian foreign policy since the dissolution of the Soviet Union. Neutralizing the blocking potential of the Caucasus mountains is at the heart of Russia’s military efforts.

That is one reason why the railway plans have failed to materialize, but there are others. Constructing a long-term peace requires genuine political willingness, prestige, and a record of untarnished leadership. When Russia negotiated a ceasefire agreement in November 2020 following the second Nagorno-Karabakh war, optimism rose that a revival of former transportation links and economic cooperation might decrease tensions and ultimately lead to sustainable peace between Armenia and Azerbaijan. This in turn should have led to a more prosperous South Caucasus. However, continual skirmishes along the Armenia-Azerbaijan border, which kill and wound soldiers on both sides, defy this expectation. Harsh rhetoric prevails and limits the space for diplomatic solutions.

This further lessens the declining level of trust between the two warring sides and creates a more chaotic security environment in the region overall. The net result is the indefinite postponement of the railroad revival project.

And this underlies deeper deficiencies related to the attempted conflict resolution. Russia’s illiberal peacebuilding methods fail to produce real security, largely because the Kremlin has no genuine interest in peace and prioritizes its own interests come what may.

The simmering tensions between the two countries make Russia the winner. For instance, unable to resist the Azerbaijani army, the Armenian government is now seriously considering the extension of Russian military activities along the entire Armenia-Azerbaijan border. There are already reports on Russian soldiers working on some sections of the border.

Russian influence also worries Azerbaijan. Although victorious in the war, its political elites genuinely, albeit silently, fear a continuous Russian military presence on Azeri soil beyond 2025 when the first term of the peacekeeping mission officially ends.

The downside for Russia’s geopolitical strategy is that it is pushing Azerbaijan further into Turkey’s embrace. Both countries have been allies for decades, but this reached a qualitatively new level with the Second Nagorno-Karabakh war when Turkish military assistance was considered key. To offset Russian influence, Azerbaijan and Turkey signed the Shusha Declaration in June where both sides pledged to defend each other in case of an attack on either party. Turkish President Recep Tayyip Erdoğan even mooted a possible future Turkish base in the country, which brought an agitated response from Russia.

The more Russia increases its influence, the greater will be Turkish willingness to support Azerbaijan. The age of exclusive Russian geopolitical domination in the South Caucasus is coming to an end and this could explain why the revival of the railways has failed so far and is likely to in the future. Opening the region up does not really advance Russian geopolitical goals, which are better served with Armenia solely connected to Russia via Georgia, while Azerbaijan is denied a direct line with Turkey.