Russia Cranks Up the Propaganda Volume 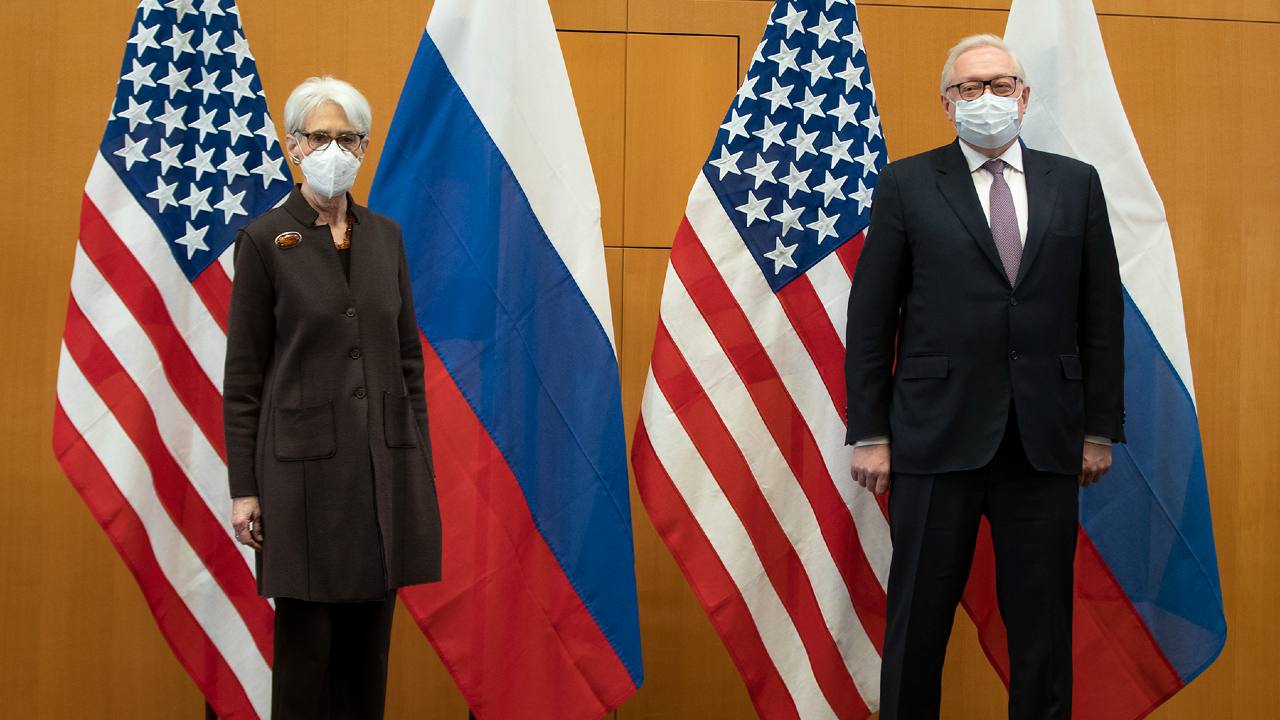 The Strategic Importance of Snake Island Rusty Guns All Bluff? Russia’s Nuclear Threats Russia’s Militarization of the Black Sea: Implications for the United States and NATO Getting Ahead of the Curve: Chinese Influence in Central and Eastern Europe After Putin Russian Power Wanes in the Borderlands
Explore

The first round of the US-Russia Strategic Security Dialogue ended in Geneva yesterday (January 10), with Russia-NATO talks due tomorrow (January 12.) As predicted, the first discussion produced no progress.

Even before the meeting between the Russian and US delegations, Deputy Foreign Minister Sergei Ryabkov made a number of hardline statements demonstrating that Russia will not make concessions and will continue to table unrealistic demands already rejected by the US.

The tone adopted by the Kremlin’s servants is extraordinarily hostile and troubling, even allowing for the need to sound tough for the domestic audience. In particular, Ryabkov told NATO, “to collect their belongings and retreat to the borders of 1997” and said that “it will no longer be possible to demand concessions from Russia.” In addition, Ryabkov stressed that Russia will not discuss the build-up of almost 100,000 troops and their equipment close to Ukraine’s borders, which for Western states is the main reason for the talks. “The demands of the United States and other NATO countries that we carry out some de-escalation measures on our territory are to be excluded from the discussion.”

Following the almost eight-hour meeting with Deputy Secretary of State Wendy Sherman in Geneva, Ryabkov made clear that the Kremlin will not budge from its demands for “legally binding guarantees that . . . NATO will not accept new members and will abandon the intention to admit Ukraine and Georgia into the alliance . . . and will abandon the material and technical development of the countries that have joined the alliance after the signing of the Russia-NATO Founding Act in 1997, which threatens the Russian Federation.”

Meanwhile, there are ever-more alarming signals that Russia is not playing around, seeking to save face in the eyes of the Russian voters, or bluff for concessions from the West, but that there is a real intention to negotiations unless it’s demands are met. Many American experts believe that Russia sees benefits in the United States’ refusal to comply with its demands, since this “unties the hands” of Russia and justifies the “necessity” of an invasion of Ukraine in the eyes of the Kremlin.

For example, Lieutenant Colonel Alexander Vindman, former Director of European Affairs of the National Security Council, said that he was almost certain of the inevitability of an offensive.

“The refusal of the United States and NATO to fulfill the requirements of the Kremlin ultimatum can be used by the Kremlin as a casus belli — a reason to start a war. If Putin decides to carry through with an invasion, I think it will be the largest military offensive since the Second World War. He can use aircraft, cruise missiles, and a huge military contingent is concentrated near the borders of Ukraine – according to our estimates, up to 175,000 people. One of the possible scenarios is the seizure of Mariupol by Russia to break through the land corridor to Crimea,” he said.

At the same time, Vindman hopes the US does have a greater appetite for sanctions than does the EU. In his opinion, the U.S. will levy heavier sanctions than the Europeans because the economic links are more tenuous.

Events in Kazakhstan also increase the likelihood of further escalation. Regardless of the role played by elements of the Kazakh elite, which neither the Kremlin nor Ukrainian experts deny, it is obvious that there is genuine discontent among the population, who have tired of poverty and lawlessness. Yet Vladimir Putin maintains that popular discontent is simply a manifestation of a “hybrid war” by the West, thereby making clear that there is no expectation or avenue for the alleviation of domestic dissatisfaction with a corrupt autocracy. Speaking on Monday at an extraordinary session of the CSTO Collective Security Council, Putin called the situation in Kazakhstan “an attack on the country” and “an act of aggression,” and apparently believes that he should strike back.

Second, the apparent success of the CSTO operation has reinforced Kremlin ideologues in their view that brute force is the only and most effective way to achieve political goals. Moreover, according to this argument, the operation in Kazakhstan forced the West to recognize this willingness to use force, which they believe strengthens Russia’s hand in negotiations with the US and NATO.

Alexander Dugin, usually referred to as the Kremlin’s foreign policy ideologist, went even further, and on the eve of the negotiations published a long text arguing that the intervention in Kazakhstan offers a solution to the “problem of the post-Soviet space.”

“In geopolitics, the legal side of the issue is secondary. Agreements and legal norms only legitimize the status quo . . . The losers do not have the right to vote, ‘woe to them.’ But the winners have this right,” he said.

According to Dugin: “The moment has come for Moscow to announce the renaming of the CIS into the Eurasian Union, including all the political units of the post-Soviet space.”

Dugin advocates a Russian land grab in Ukraine. This would involve the occupation of so-called Left-Bank Ukraine — that is, the land between the current international border and the River Dniepr — presumably including eastern Kyiv, making the Ukrainian capital a divided city and placing much of its hinterland under Russian rule. He also argued that Russia should push right up to the borders of the Baltic states, which would likely mean sending troops through Belarus, and issue an ultimatum to the thee NATO members: neutrality or war. He was echoed by the head of the RT TV channel Margarita Simonyan, who wrote on Twitter that if Russia itself could produce the goods that it buys in the United States, it could “liberate Donbas right now, and not leave out Odesa either.”

In short, in recent days Russia’s rhetoric against NATO and Ukraine has become even more aggressive, which, together with its existing, extreme demands, increases the chances of an escalation.