The second week of Russia's full-scale war against Ukraine has begun; combat aircraft are being used against civilians; repression is on the rise in Russia. 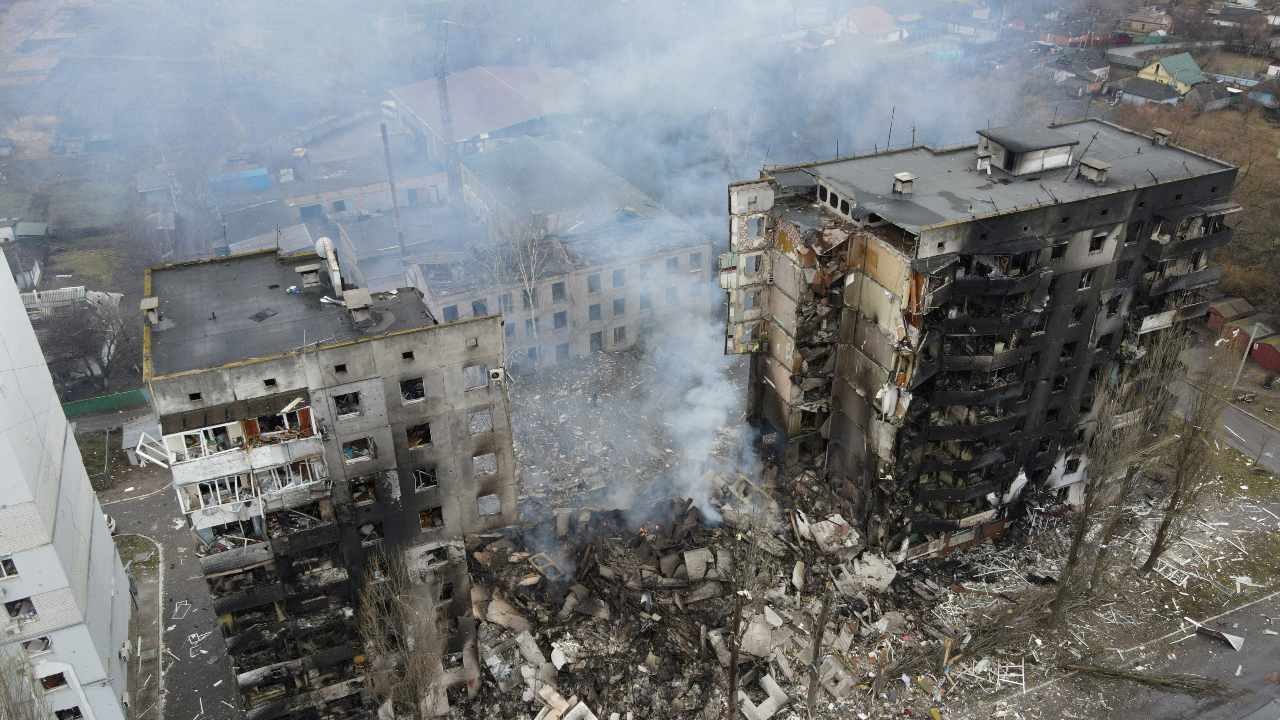 Photo: An aerial view shows a residential building destroyed by shelling, as Russia's invasion of Ukraine continues, in the settlement of Borodyanka in the Kyiv region, Ukraine March 3, 2022. Picture taken with a drone. Credit: REUTERS/Maksim Levin.

The Russian army has been shelling residential areas of Kharkiv with Grad and Smerch multiple launch rocket systems, as CEPA previously reported. Air attacks have also been stepped up, with as Many as 30 combat aircraft violating Ukraine’s airspace, mainly from Belarus, with attacks including a number against the civilian population, according to the Ukrainian General Staff on March 2. Since the start of the Russian invasion, more than 180 missiles have been fired at the territory of Ukraine.

“The intensity of the fighting has decreased, but attacks on civilian targets have become more frequent. With this, the Russians are taking revenge on us for our stubborn resistance,” former Deputy Minister of Defense of Ukraine, Chairman of the Expert Council of the Center for Army, Conversion and Disarmament Studies (CACDS) Leonid Polyakov told CEPA in an interview.

On the morning of March 2, Russian planes bombed the central quarter of Kharkiv. A tank school, air force university, and the Police Headquarters were hit by missiles. According to preliminary data, one civilian and three policemen died in the raid, and 15 were wounded. Polyakov said that there were rocket launchers aimed at the center of Kyiv. The bombing was carried out both from the air and from the Uragan multiple launch rocket system, which can be fitted with 51.7-kilo (114-lb) high explosive warheads.

To date, more than 2,000 civilians (not counting the military) have been killed, according to data from the Ukrainian State Service for Emergency Situations, up to March 2 from the start of the invasion on February 24. On March 1, Marina Fenina, a national member of the OSCE Special Monitoring Mission to Ukraine, was killed by shellfire in Kharkiv. At the time of her death, she was delivering supplies for her family and children. Bombing is also being observed in Kyiv.

“It looks like the Russians still want to take the capital,” Polyakov said. “Since several such attempts have already been repelled, they are turning to intimidation and are hitting civilian targets. The invaders hope to break our will to resist, but we do not give up and are inflicting heavy losses on them. A striking example is the 200th Marine Brigade of the Russian Northern Fleet, which lost about 70% of its personnel near Kharkiv.”

He said the mortuaries of Belarus are already filled with the corpses of Russian soldiers killed in Ukraine, including the notorious Kadyrovtcy militiamen of the Chechen leader.

Ukrainian morale is very high according to a March 1 poll, and Polyakov says the Ukrainian army’s fighting spirit is undiminished. But it now needs assistance in several areas.

“The invaders started destroying infrastructure,” he said. “Accordingly, we will need generators, fire equipment, temporary portable housing, and so on. We also need people and ammunition. I would like the recruitment and transportation of volunteers from other countries to be carried out on a systematic basis,” the former Deputy Defense Minister said. The armed forces also need anything that can shoot down planes and incinerate tanks.

The country still needs a missile defense system and it would help hugely if Russian navigation satellites could be jammed, which would help protect against missile strikes, Polyakov said.

The dispatch of Romanian and Bulgarian warships to Odessa, just as American ships once entered Georgian ports, would also assist. And deterring Belarus from directly engaging its forces in Ukraine is also crucial, he said.

Repression and calls for executions

On March 2, the United Nations General Assembly adopted a resolution by 141 votes to five strongly condemning Russia’s unprovoked invasion of Ukraine. Foreign Minister Dmytro Kuleba noted that Russia, Syria, North Korea, Belarus, and Eritrea were the only countries voting against the resolution.

Meanwhile, propaganda is on the rise in Russia itself. Realizing that an easy and quick operation has failed, the propagandists have changed their rhetoric, and now focus on the notion that anything other than victory would mean the end of Russia.

True, some of them openly admit that the main threat of defeat in Ukraine is that the government will not be re-elected, that is, there is an implicit acceptance that defeat will hit Putin and his entourage rather than Russia. However, mainstream rhetoric boils down to the formula that defeat is tantamount to national death. The narrative that Russian aggression is protecting the population of Donbas from the Nazis continues meanwhile, as does the idea that the war is not with Ukraine, but with the United States, which is said to issue direct orders of the Ukrainian government and military.

Russian propaganda is also increasingly emphasizing that the justification for the war is not very important. This approach pursues the long-established idea that the people should support the armed services in wartime and that (see above) this is a struggle for national survival. Accordingly, all opponents of the invasion are called traitors. Former spy and active war propagandist Andrey Bezrukov openly proposes not just to arrest such people, but to shoot them “according to all the laws of wartime.”

On March 2, a bill was submitted to the State Duma of Russia that proposed a criminal liability and punishment of up to 15 years for the “production and distribution of fakes” about the actions of the Russian armed forces.

According to media reports, people leaving Russia are intensely interrogated by Russian border guards, who are calling them “traitors.” Rumor has it that a state of war or a state of emergency, which would prohibit travel, could be introduced at any moment. In the meantime, the special detention center in Yekaterinburg has already run out of space for prisoners arrested at anti-war actions. Experts predict that anti-war sentiment will continue rising.